Lord Yao (in Chinese: 妖魔王) is a giant boar-like demon. Yao fought Goku Jr. in the special; Dragon Ball GT: A Hero's Legacy. He is referred to as Lord Yao due to being the king of Mount Paozu, as well as a Demon Lord. Yāo (妖) means demon/monster in Chinese.

Arriving while Mamba and her goons were chasing Goku Jr., he fired a cannonball at Goku Jr. He then unleashed a powerful snout blast at them. The father bear started to attack Yao, but Yao grabbed the bear by his neck and proceeded to choke him by turning his hand into a root that wrapped around the bear's neck.

Then, his other hand turned into a blade, but, before Yao could kill the bear, Goku Jr. transformed into a Super Saiyan and quickly defeated the Demon Lord.

What remains of him currently remains a mystery, as he was last seen passing out under some rubble after Goku Jr. sent him flying into a rock wall. It is unknown if he was killed or if he survived. 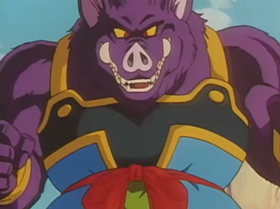 Retrieved from "https://villains.fandom.com/wiki/Lord_Yao?oldid=3540431"
Community content is available under CC-BY-SA unless otherwise noted.