The Lord of Bones, also mocked as "Rattleshirt", by the brothers of the Night's Watch, is a character of A Song of Ice and Fire and its TV series adaptation Game of Thrones. He is a notoriously fearsome wildling leader and a fierce enemy of the Night's Watch.

He is called Rattleshirt due to his armor, which is made up of loosely-tied bones that clatter as he moves. He wears a broken giant's skull as his helm.

In the TV series, he is portrayed by Edward Dogliani in season 2 and season 3, and later by Ross O' Hennessy in season 5.

Rattleshirt is a small man, yet he is considered sly, cruel, and treacherous. Jon Snow thinks of him as bloodthirsty and without honor.

Rattleshirt warred with Harma Dogshead until Mance Rayder made peace between them. Rattleshirt and the rest of the wildlings accepted Mance as King-Beyond-the-Wall and follow him in order to survive winter and the Others.

Rattleshirt is among the leaders of Mance's army. Among the people fighting for him are Ygritte, Longspear Ryk, and Orell. The Night's Watch plans to kill Mance in order to stop the wildlings from marching south. Qhorin Halfhand's party is captured by Rattleshirt and most of them die during the chase. Only Qhorin and Jon survive, but if Rattleshirt brings Qhorin to Mance, he will die a slow death, so Qhorin orders Jon to kill him and infiltrate the wildlings to get more information for the Night's Watch. Rattleshirt commands Jon to kill Qhorin, but even after that he remains unconvinced about Jon not being loyal to the Watch anymore. He has Qhorin's body burned and refuses to free Jon, instead he decides to bring him to Mance so he can decide Jon's fate himself.

Rattleshirt brings Jon to Mance Rayder at the main wildling camp in the Frostfangs. Before he leaves the tent he casts his suspicions on Jon's true motives. Later Rattleshirt keeps watching over Jon and orders Ygritte and Ryk to guard him.

Later Rattleshirt brings him to Mance at the Fist of the First Men, where Mance orders Tormund to take Jon in his party. Ygritte and Longspear Ryk abandon Rattleshirt and join with Tormund. Later Jon and Ygritte have to join with Styr's party and climb the Wall near Greyguard.

Mance Rayder sends various raiding parties to attack different areas at the Wall, to draw away the garrison of Castle Black. The Weeper is spotted near Icemark, wildlings have been climbing near Queensgate, Harma Dogshead leads the van and is spotted near Woodswatch-by-the-Pool, and Rattleshirt is seen near Long Barrow during the assault on the Wall.

Rattleshirt is captured by the Night's Watchmen of Eastwatch-by-the-Sea and taken prisoner. The commander of the castle, Cotter Pyke, sends reinforcement for the garrison of Castle Black, led by Ser Alliser Thorne and Lord Janos Slynt.

Rattleshirt is brought at the meeting between Janos Slynt and Jon Snow. Lord Janos is trying to have Jon executed so he has Rattleshirt testify against Jon, as a witness of Qhorin's death, which Rattleshirt is pleased to do so. Only Maester Aemon manages to save Jon from execution, but later Slynt and Thorne agree to send him to Mance's camp where he's supposed to kill him, so the wildlings might finally abandon their assault at the Wall. The Battle of Castle Black ends when King Stannis Baratheon arrives with a host from Eastwatch-by-the-Sea and destroys Mance's camp, and captures and kills many wildlings. Thousands of wildlings flee back to north, in the wilds.

A Dance with Dragons

Stannis plans to allow the wildlings through the Wall, as the Others are going to add them to the army of the dead. The wildlings have to bend the knee to him and accept R'hllor as their new god. Stannis sentences Mance to death for being a deserter of the Night's Watch. After Jon Snow is elected 998th Lord Commander and Janos Slynt is later executed for insubordination, Stannis has Mance burned alive at the stake. However, unknowingly to Stannis, Jon, and anyone else, the man burned alive was actually Rattleshirt, glamored by Melisandre's magic to look like Mance. No one but Mance and Melisandre know the truth of the deception. Melisandre keeps the secret from Stannis due to Stannis's strict code of following the law.

Rattleshirt is burned alive by Stannis with the wildlings, members of the Night's Watch, king's men, and queen's men there to bear witness. Rattleshirt is burned in a cage made out of wood from the haunted forest, despite Jon's pleas to King Stannis to spare him. At the sight of the cage, Rattleshirt's courage fails and he goes to his death begging for mercy, denying his kingship and his name and shrieking of witchcraft. As the cage burns Jon orders his bowmen to shoot Rattleshirt with arrows to give him a quick death. Stannis promises all who serve him food, land and justice. The gates of the Wall are opened and most of the captive wildlings enter to kneel before Stannis, feeding the fire with fragments of weirwood, pieces of the old gods to feed R'hllor's fires.

Mance Rayder remains disguised as Rattleshirt at Castle Black, until Melisandre has a vision in the flames and sends him to Winterfell to rescue the false Arya Stark from the Boltons.

In the TV series Rattleshirt's story is pretty much the same until season 4, where Tormund is the wildling leader captured by the Night's Watch instead of Rattleshirt, who manages to flee back in the wilds during Stannis's attack.

Stannis burns alive the real Mance Rayder, and does not threaten to send the Free Folk back beyond the Wall if they don't bend the knee to him, thus the wildlings don't bend to Stannis like in the books. Stannis is still ok with letting them in his kingdom and leaves his wildling prisoners to Jon to decide their fates.

Rattleshirt replaces Mother Mole and gathers thousands of wildlings at Hardhome. When Jon arrives with Tormund to get the wildlings on Stannis's ships and bring them south of the Wall, Rattleshirt accuses Tormund of being a traitor and makes an insulting and opprobrious remark about Tormund sucking Jon's cock. Before he can finish the insult, Tormund grabs his staff and beats him to death with it in front of the other wildlings.

It is likely that in the aftermath of the massacre at Hardhome, the Lord of Bones was reanimated as a wight by the Night's King alongside all the other dead wildlings and Night's Watch. However, he might have been spared his fate, as there was plenty of time to burn his body during the meeting of the elders and evacuation of Hardhome. 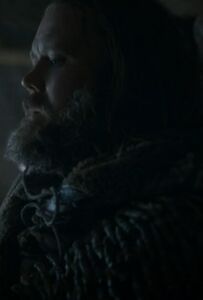