Satanic lord of the underworld

Deceiving people.
Harnessing the power of darkness.
Ruling the underworld.

Destroy the sun to erase the power of light.
Usher in an age of eternal darkness.
Make Princess Lili his queen.

The Lord of Darkness, also known as the Dark Lord or simply Darkness, is the master of the underworld and the main antagonist of the 1985 dark fantasy film Legend.

He was portrayed by Tim Curry, who also played Pennywise in the It television miniseries, Thaddeus E. Klang in TaleSpin, Hexxus in FernGully: The Last Rainforest, Long John Silver in Muppets Treasure Island, Maestro Forte in Beauty and the Beast: The Enchanted Christmas, Professor Calamitous in The Adventures of Jimmy Neutron: Boy Genius, Anatoly Cherdenko in Command and Conquer: Red Alert 3, Billy Flynn in Criminal Minds and Emperor Palpatine in Star Wars: The Clone Wars, among many others.

Little is known about the Lord of Darkness. What is known is that the world was once a place of perpetual night, ruled over by him but when Light was born, he and his minions retreated beneath the earth. At some point during Darkness' rule, wicked men came to his lair to make sacrifices to him. The Lord of Darkness resides in the Great Tree which is filled with all types of strange beasts and nightmarish horrors including giants, demons and goblins. As the ruler of darkness, his weakness is sunlight and any object of light.

He orders his most evil goblin Blix, to kill the two unicorns, the source of light in the mortal world so that it will enter a neverending age of night and become his kingdom once more. His incompetent minions however, only succeed in killing one unicorn by severing its horn. With the other unicorn still in the world, dawn is still able to rise so Darkness resolves to capture the other unicorn however his plans are complicated when he falls in love with Princess Lili, a pure woman whose beauty has captivated him while she is trapped within his domain. He speaks to his father (who is presumably Satan) and asks what to do with her. His father's disembodied voice emanates from a huge fireplace, instructing Darkness to turn Lily to his side through any means necessary.

As he lures her into his chamber, Darkness charms Lili with an enchanted black dress, and as she dances, the dress merges with her. At the same time, the Lord Of Darkness comes through a mirror to meet her, in his true form. During this, Lili's beloved, Jack, Jack's friend Gump and their companions enter the Great Tree, undetected and overhear the brief "talk" between Lili and Darkness as he reveals his plan to plunge the world into eternal night and that Sunshine is what can destroy him.

She tells him that she will be his, if she gets to kill the last unicorn herself.

During the ensuing "Dark Ceremony" that will signal an apocalyptic ice age with the sacrificed blood of the unicorn, Darkness prepares to sacrifice the last unicorn before the gates of the dark void that surrounds the world however Lili breaks the chain holding the unicorn and it manages to escape. Angrily Darkness knocks her unconscious and Jack reveals himself and attacks Darkness before he attempts to kill her. The two warriors engage in a final battle as they sword duel each other.

Finding himself outmatched, Jack grabs the horn of a murdered unicorn and stabs Darkness through the stomach with it. As the sun rises, Jack's companions use the mirrors to reflect the sunshine, channeling its rays into the Lord of Darkness's lair. Darkness was able to survive the daylight shining on him by holding onto the unicorn horn, during which he taunted Jack that he could never defeat him as, but when Jack knocked the unicorn horn from his hand, the light sent him hurtling into space where he exploded into stars. However just before he explodes, he taunts Jack a final time by saying that light cannot exist without darkness.

The Lord of Darkness is evil yet charismatic and charming. He shows a strangely human side in his attraction to Princess Lili. He is captivated by her purity and innocence which stand in stark contrast to his own dark soul yet he is also greatly amused by the idea of corrupting her innocence. A cruel sadist, he seems almost aroused by the prospect of watching Lili sacrifice the unicorn.

Although Darkness believes himself to be in love with Lili, in all likelihood, he merely lusts after her. Nevertheless, he offers her his heart and states that he wishes to spend eternity with her. Darkness' true passionate nature is alluded to by the terrifying rages that he will fly into whenever he is defied or thwarted, though he usually conducts himself with an aura of amused indifference and cold calculation.

He presents Lili with a magnificent, if somewhat disturbing feast of fine food and wine and gives her beautiful jewelry along with a magnificent gown, showing a cultured and sophisticated side to his personality. Like most archetypal villains, his pride and arrogance lead to his downfall. He is contemptuous of most people and things, describing goodness as "disgusting", referring to Jack as a "little boy" and holding his minions in disdain. When Lili flatters his ego, pretending to be charmed by him and offering to kill the unicorn, he readily believes her.

The Lord of the Darkness could change his form, but he was always huge. When he first appears he has dark blue skin, long, sharp, glowing leather claws, two enormous black horns, sharp teeth, a long, pointed chin, cloven hooves and glowing, yellow snake-like eyes. In his second appearance, he was a hooded figure, hovering in the air, wearing long, flowing, ragged robes, his face invisible. His final form is the same as his first but with blood-red skin. In this form he wore a black cape along with black trousers. In promotional images for the film, he is often shown holding a staff however he never displays this in the film.

In addition to his considerable physical strength, the Lord of Darkness can shoot fireballs out of his fingertips and create illusions. At one point in the film, he enters the room by stepping through a mirror, leaving it intact, suggesting that he has teleportation abilities and can manipulate matter.

He is a formidable swordsman and is capable of charming or intimidating people into doing what he wants, making him a master of psychological manipulation, alluded to by his statement that he can influence people through dreams which he claims to be his "specialty". The Lord of Darkness also has shape-shifting abilities, assuming three different yet similar forms over the course of the film. In one of his forms, he shows the ability to fly. 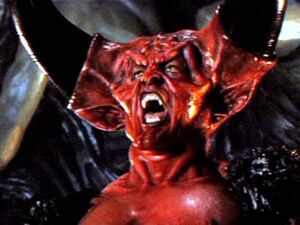 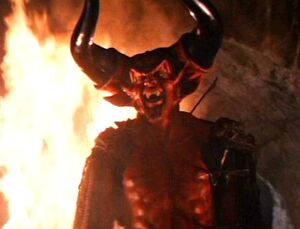 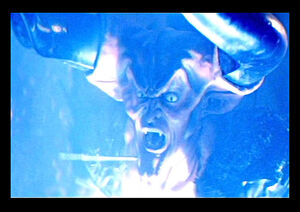 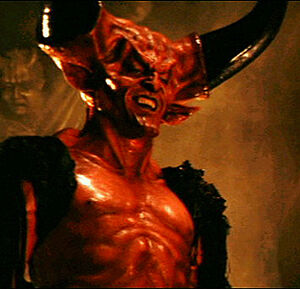 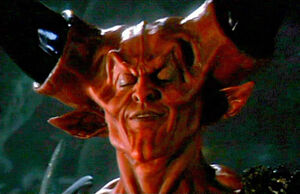 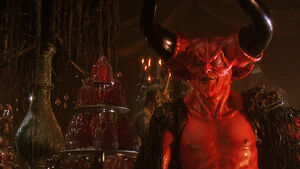 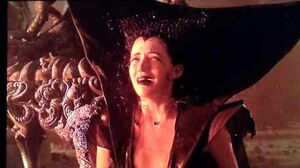 Legend- My Lady, "I require the solace of the shadows and the dark of the night!". 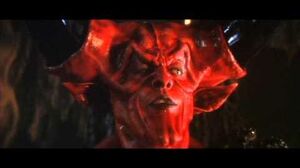 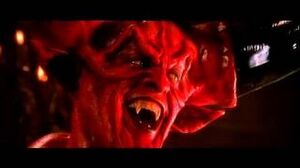 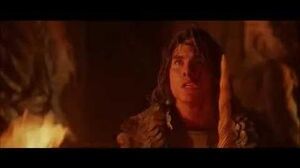 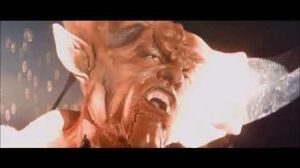 What is light without dark? What are you without me?