Hive mind of the Dread Dust

Possessing humans and other organic creatures

Going back in time to keep itself immortal.

Devour the planet with the Dread Dust endlessly.

The Lord of Dust is the main antagonist of the 2018 zombie survival game Metal Gear Survive. It is the hive mind of advanced, self-replicating nanomachines known as Dread Dust.

Once a medical nanomachine built in the future, the Dread Dust began to self propagate at an alarming rate and developed a mind of their own, possessing humans that came into contact with it into zombie-like monsters called the Wanderers. At some point, a swarm of the Dread Dust formed together into a central focus, a towering beast called the Lord of Dust. Once the world was completely ravaged by the machines into a lifeless world called Dite, the Lord of Dust opened a wormhole to the past to restart its cycle of consumption.

One wormhole opens in 1975 above the Big Boss' Mother Base that drags the entire base into Dite, forcing them to fight against the horde of Wanderers that plan to infect them with the Dread Dust. After surviving multiple numbers of Wanderers, the survivors are able to replicate the Dread Dust's ability to call upon a wormhole to their time period. However, this attracts the Lord of Dust, using balls of nanomachines to attack and demolish their base. Fortunately, the survivors are able to escape and close the wormhole before the Lord of Dust could follow them in. 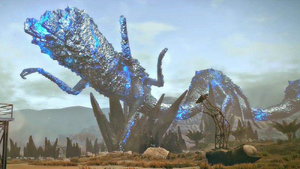 The Lord of Dust. 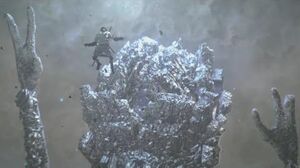 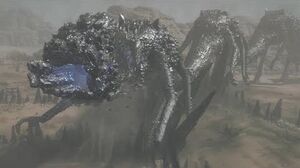