Lord of the Locusts

The Lord of the Locusts

Plunge the world in Nothingness and claim the souls of its denizens for itself (failed).

The Lord of the Locusts (sometimes shortened as The Locust) is the overarching antagonist of the Bone comic book series.

He is a frightful demonic force who commands the Hooded One and serves as the source of evil in the universe. He is the cosmic manifestation of nightmares, which seem to come from him. He feeds on fear and preys upon people's ability to dream (their connection to the source of the Bone universe). He seeks to roam the Waking World and claim the lives of its entire population.

The Lord of the Locusts is the unseen Dark Lord who orchestrates nearly all of the saga's villainy. He is an evil, formless, nightmare entity from the Spirit World, whose mere existence disturbs the Dreaming. He needs to possess a host to exist in the Physical Planes and manifests himself as a swarm of millions of locusts, which he can control individually. (It must be noted that he speaks using "we" instead of "I", hinting the possibility that every locust is a part of himself.)

He is frighteningly powerful and wields immense powers over illusions, being able to plunge people into extremely realistic mirage sequences that might turn them mad. His presence alone blurs the frontiers between the Dreaming and the Waking, and can overwhelm his victims with nightmares. He can create "Ghost Circles": invisible gates between the Spirit World and Nothingness that erase everything they touch from existence and trap people's souls between life and death; and seeks to expand them all over the world.

Even when sealed, he is able to swarm his surroundings with his locusts and to communicate with people or corrupt them. He is attracted to creatures with strong affinities with the Dreaming, such as the Dragons and the Veni-Yan-Cari (the Awakened Ones: humans who control the Dreaming), whose sensitivity makes them vulnerable to his evil. Also, he influences the Rat Creatures who live in the mountains where he was sealed. He is also able to grant powers to those whom he corrupted, or to seal a fragment of himself within someone. The more fear his agents spread, the more power he regains.

In the beginning of times, when the Dragons ruled the earth, the Dragon Queen Mim maintained the balance of the Dreaming and kept the world in perfect harmony. Alas, the Lord of the Locusts wanted to be part of the Waking World (and claim it for himself), and he chose Mim as his host. The Locust's possession drove Mim to madness and sent her on a rampage, in which she killed millions of living creatures and disturbed the balance of the Dreaming forever. (Mim's madness being very likely the Locust acting through her.)

The entire Dragon population fought against Mim in an apocalyptic battle, and managed to turn her into stone and to entomb her below the earth. This cataclysm separated the Dreaming and Waking Worlds permanently. Because of this, the Dragons taught a young girl named Ven Harvestar how to watch over the Dreaming. Later on, the tomb of the Locust became a mountain chain populated by Rat Creatures, and Ven founded the kingdom of Atheia; along with the order of Venu, keeper of dreams led by mystic shamans able to walk between worlds called the Veni-Yan-Cari.

The Lord of the Locusts acts through the treacherous princess Briar Harvestar and a River Dragon named Balsaad, whom he corrupted. Briar's younger sister Rose confronts the Locust's swarm and eventually kills Balsaad, despite of the healing factor granted to him by the Locust. Furious at Briar for refusing to use Rose in the ritual needed to free him, the Locust ages her as a punishment.

Fifty years before the start of the story, the Locust indirectly influenced the Rat Creatures to wage war against Atheia alongside the eastern humans from the nation of Pawa. (The Pawan warriors eventually came to worship the Locust.) Thanks to Briar, who told them about the Atheian armies' actions, the Rat Creatures managed to topple the kingdom and claim the Valley as their own, eventually slaying the royal family (save from Rose and her grand-daughter Thorn). However, Briar's treachery was unveiled and she was slain by Thorn's father.

With help from the Dragons, Rose could drive the Rat Creatures out of the Valley, agreeing not to rebuild the kingdom if the Rat Creatures were to remain in their mountain. However, The Lord of the Locusts raised Briar as an undead so that she could continue to serve him. Fifteen years later, Briar using the alias of the Hooded One had gained complete dominion over the Rat Creatures and was ready to restart war.

The Lord of the Locusts first manifests himself at the beginning of the story, when three toon-like creatures named Fone Bone, Smiley Bone and Phoney Bone enter the Valley. His swarm of locusts overwhelm and separate the three cousins, but the swarm's true nature would not be revealed before long.

The Locust speaks with the Hooded One several times during the course of the story, discussing about the plan of action she decided or the potential threats. At one point, he sends a swarm of his locusts after the Bone cousin's party and traps them in a mirage. His locusts then seize Fone Bone and attempt to capture him, but a magic Dream Talisman given to him by Rose Harvestar drives them away.

When the Hooded One attempts to sacrifice Phoney Bone to release the Lord of the Locusts, it is revealed that she mistook him for a Veni-Yen-Cari and that sacrificing him would be useless. Displeased by this, the Locust turns her back into a corpse and attempts to corrupt Thorn Harvestar (who is an exceptionally powerful Veni-Yan-Cari), but Fone Bone drives his locusts away with the Dream Talisman. The entire mountain is later destroyed in a volcanic explosion, and both Thorn and Fone Bone now bear a fragment of his essence.

The Locust raises the Hooded One again and she expands his Ghost Circles all over the Valley, engulfing entire populations and spreading fear everywhere. All this strengthens the Locust, to the point that he ends up escaping from his jail while still possessing the Dragon Queen Mim, surrounded by a tremendous thunderstorm, spelling the imminent end of the world. As the protagonists struggle to defend the capital city of Atheia from the Hooded One's hordes, Thorn (who received spiritual guidance from her mother's spirit) sneaks out with Fone Bone and goes to Tanen Gard, the Dragons' sacred burial ground; searching for the "Crown of Horns": the very heart of the universe. There, she slays Kingdok and manages to touch the Crown with Fone Bone's help.

Thorn channels her Dreaming power into the Crown of Horns to destroy the fragment of the Locust within herself, causing a chain reaction that obliterates the Lord of the Locusts and the Hooded One once and for all. With the Ghost Circles gone and the Valley restored, a newly freed Mim returns underground with the Dragons. Thorn then restores Atheia and becomes Queen of the Valley, setting durable peace with Pawa and the Rat Creatures.

Quest for the Spark

The Lord of the Locusts' threat is not fully over in spite of his destruction. His original second-in-command, an immensely powerful corrupted dragon named The Nacht, returns to the Valley and attempts to make everyone fall asleep, to take over both the Waking and Dreaming worlds. 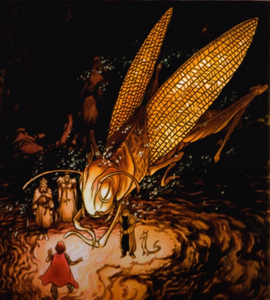