Keep the population on the surface of Earth under one million.

Lordgenome, also referred to as the Spiral King, is the central antagonist of the anime series Tengen Toppa Gurren Lagann, serving as the main antagonist of the first half and later a supporting member of Team Dai-Gurren. He is the ruler of the Beastmen and the leader of the Human Eradication Army. His primary goal was to confine humanity to underground villages in order to prevent the cataclysmic Spiral Nemesis from occurring, and he dispatched his army of Beastmen to eradicate any humans who came to the surface.

He was voiced by Narushi Ikeda in Japanese and Jamieson Price in English.

Lordgenome is a strong, amazingly muscular man. His skin tone is slightly darker than that of most other characters in the series. His chest hair has the shape of a galaxy. He sports a goatee and impressive sideburns curled upwards.

His head is bald, though when he channels Spiral Energy he gains a mane of raging flames. His eyes are white and the shape of a spiral can be seen within.

As the Spiral King, Lordgenome is usually wreathed in a white cape, though when he engages in battle he discards it and goes bare-chested.

As a boy, Lordgenome witnessed the Anti-Spiral's assault on his planet. Amid the mass confusion of the Spiral race, Lordgenome discovered that a small machine, a Lagann-type mecha, had fallen from the sky. Lordgenome claimed the machine as his own and eventually grew to become a Spiral Warrior, leading the human resistance against the Anti-Spiral. He also became a great scientist, who made innovations in the field of genetic engineering that were nothing short of miracles. And thanks to the discovery of the Lagann, the human race was able to build similar, and even more advanced machines - driving back the Anti-Spiral.

Unfortunately, although they were able to resist the Anti-Spiral's assaults, they could not deliver a final blow to the entity, hidden as it was in its parallel dimension. Still, the Anti-Spiral grew tired of their efforts and decided to use an alternative tactic to overcome humans. It manifested before Lordgenome and revealed to him the Spiral Nemesis, an event that would surely destroy the universe if the creation of spiral energy overcame its limits.

Weary of the endless battle, terrified by what he had just learned and desperate to save the Spiral race of Earth, Lordgenome struck a deal with the collective entity. As long as he kept the population of humans living on the surface under one million, then the Anti-Spiral would cease the assault. In the following events, Lordgenome ended up attacking and destroying his own comrades. Returning to Earth, he forced the remaining humans underground. The Anti-Spiral took possession of his giant warship, the Cathedral Terra, leaving it in orbit as a secret weapon and disguising it as the moon. Lordgenome kept his giant mecha, the Dekabutsu, around which he would build the capital city of Teppelin.

Once this was accomplished, Lordgenome began experimenting and created the Beastmen, artificial human/animal hybrids that could not reproduce naturally and therefore held no spiral energy. He used these Beastmen to pilot Gunmen, robots similar to the kind that had been used in the war against the Anti-Spiral. The Beastmen would be responsible for ensuring that no human who reached the surface survived, as Lordgenome assembled them into the Human Eradication Army to exterminate any humans who ascended from the underground. Lordgenome destroyed most of the original weapons he had used during the Anti-Spiral war, but one Lagann was instead buried deep underground, which would eventually be found by Simon.

To keep himself entertained over the years, he had numerous daughters with concubines but sealed them away once they showed self-awareness. His secret purpose for this was that he had determined those concubines had a high chance of holding the Anti-Spiral gene within them that would eventually transform them into a formidable enemy.

Simon ended up discovering the Lagann and encouraged by his friend Kamina, used to fight a Gunman that had fallen into their village. From there they flew to the surface, where more Beastmen awaited them. Despite sending troop after troop, and all of his Generals, Lordgenome could not prevent Simon from reaching Teppelin. Even its reveal as the giant Dekabutsu did not hold Simon back for long. He made it all the way to his throne room, and after defeating the beastman Viral rather quickly, Simon turned to Lordgenome. Lordgenome utilized his Gunman, Lazengann, whose powers were very similar to Lagann's. Simon managed to overpower it, but Lordgenome broke out of its remains and started beating Simon's Lagann with his bare hands. As Lordgenome gloated in victory after ripping Lagann to shreds, Simon used Lagann's Core Drill to pierce Lordgenome and make a gaping hole in the King's chest. Before falling to his death, Lordgenome warned Simon not to let the population go over 1,000,000.

After seven years, it was revealed that Rossiu had used genetic material from Lordgenome to create a "Biocomputer" in the image of Lordgenome's head to answer all of his questions concerning the Anti-Spiral. The computer developed a personality and memories similar to Lordgenome himself, effectively "resurrecting" the man. Rossiu used the Biocomputer to gain information regarding the Anti-Spiral and took him along during humanity's escape into space in the Arc Gurren. His knowledge was also instrumental in recovering his old flagship, the Cathedral Terra, from the Anti-Spiral.

When the gargantuan Tengen Toppa Gurren Lagann was created to fight the Anti-Spiral, Lordgenome was able to regain his full personality, temporarily regenerate his body and recreate his Lazengann as a part of the mech, thanks to some side effect of the Anti-Spiral dimension. As the Tengen Toppa Gurren Lagann was about to be destroyed by the Anti-Spiral's Infinity Big Bang Storm, Lordgenome interfered and used his Lazengann Overload to absorb the attack. This resulted in Lazengann suffering a quantum breakdown, which allowed him to convert both himself and the attack into spiral energy, which he then gave to Simon. His sacrifice allowed Simon to overwhelm and finish off the Anti-Spiral for good. 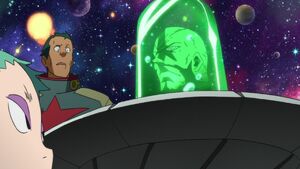 Lordgenome as a super computer.

Lordgenome in the final battle.