The Lords of Salem

Use the female descendant of their executor as a vessel to have her bear the Antichrist in Satan's name (accomplished).

The Lords of Salem , also known as "The Lords" and "The Coven", are a 17th century cult-like coven of 7 witches in Salem, Massachusetts who worshipped Satan and they are the titular main antagonists of the 2012 American independent horror film of the same name, written, produced and directed by heavy metal musician Rob Zombie. They are led by Margaret Morgan and their main goal is to bring the birth of The Devil's child.

It began in 1696, with the Reverend Jonathan Hawthorne writing in his diary about a coven of witches performing satanic rituals in the forests of Salem and about his plans to stop them.

Later in present day Salem, Massachusetts, where Heidi sees a new neighbor in Apartment 5, only for her landord Lacy to deny any such resident. Heidi is later shown working as a DJ at a hard rock station with her co-workers Herman "Whitey" Salvador and Herman "Munster" Jackson. The receptionist shows Heidi a strange wooden box that was addressed solely to her from a band named the Lords of Salem; Heidi takes it home with her. She and Whitey listen to a record contained within the box, which initially sounds broken but soon begins to play a chant similar to the witch rites seen in the beginning of the film. The chants prompt Heidi to have a vision of the witches chanting, and of one of them giving birth to baby that is then murdered, only for the visions to stop once Whitey turns the album off.

The next day, Heidi attends a group meeting for drug addicts before going to work, where she interviews Francis Matthias, who wrote a book about the Salem witch trials. The station then plays the mysterious record Heidi had received, which causes all of the women in Salem to enter a trance. After the show is over, Matthias returns home, where he confesses to his wife that the band's name, The "Lords of Salem", bothers him. Meanwhile, strange apparitions begin to appear around Heidi without her immediately noticing, although it is shown to irritate her dog. One incident causes Heidi to investigate why her dog is acting strangely, only for her to enter Apartment 5 and experience visions of a demon and a nude witch that demands that she lead the coven again. Heidi later wakes up in bed, with the events in Apartment 5 appearing to be a nightmare.

Troubled, Heidi later visits a graveyard church where she is initially comforted and then sexually assaulted by a priest. She then wakes up in one of the pews, with the assault seemingly only occurring in the dream. Heidi flees the church but is faced with a ghostly entity who tells her that he has been waiting for her. The film then shows Matthias researching the Lords of Salem. He discovers some music in the book he is reading and, after asking his wife to play the notes on their piano, realizes that it is the same music heard on the record. Matthias finds the author and asks him about the group, to which the author replies that it was believed by Reverend Hawthorne that the band (which was believed to have existed during the 1600s) was tasked with creating music for the witches. As a result Hawthorne killed the witches, only for one of them, Margaret Morgan, to curse both the Salem women and Hawthorne's descendants, calling his bloodline "the vessel by which the devil's child would inherit the earth".

Heidi is then shown at work, where she and her coworkers announce that the Lords of Salem will be performing locally and that they have tickets to give out. The record is played once again, which causes Heidi to have more strange visions that upset her. She ends up staying at Whitey's home in an attempt to avoid her apartment, only for her to experience more disturbing visions and wake up in her own apartment. As a result of these visions Heidi goes out to purchase drugs, which she takes while listening to a French language-learning tape. She is interrupted by her landlord Lacy and her sisters Sonny and Megan, who then lock away her dog and take her toward Apartment 5. They pause only to answer a phone call from Matthias, who has discovered that Heidi is one of Hawthorne's descendants, telling him he has called the wrong number. As they take Heidi into the apartment, she sees that rather than a small apartment it is instead a huge operahouse with a demon at the top of a staircase. She approaches him, now wearing appropriate face paint, as he screams, but later finds her way back to her bedroom.

The next day, Matthias tries to check up on Heidi and is let in by Lacy, who lies and says that Heidi is not home. He is escorted into Lacy's apartment where he meets her sisters, who assault and kill him after Matthias tells them that he is there to give Heidi information about the Lords of Salem. Heidi hears his murder, but does not mention it when Whitey shows up later to take her to the concert. Once at the concert, Herman becomes disconcerted with the events occurring. Heidi enters the palladium and locks out Herman and Whitey. On stage inside, Lacy and her sisters attempt to summon Satan, whilst Margaret Morgan's and her coven members' ghosts appear and tell Heidi that they have been waiting for her. The witches plays the song of The Lords and the female audience members and Heidi strip off their clothes. Heidi is transported to a strange palace while the witches and audience members cavort. After several surreal visions and the reappearance of Count Gorgann - a satanic Black Metal singer interviewed by Heidi at the beginning of the film - Heidi gives birth to a strange demonic creature and is shown standing on top of the naked audience members, who are all dead at this point, dressed as the Virgin Mary while All Tomorrow's Parties is heard and Lacy and her sisters smiles blissfully. As the end credits appear, a radio announcement is heard that accounts for a mass suicide, as well as the disappearance of Heidi. 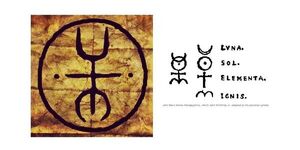 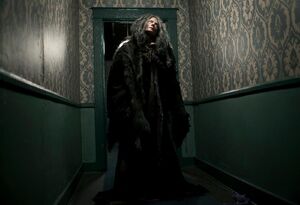