Has access to drugs that are fatal or can induce aggression

Lorraine "Lori" Spengler is the main antagonist of the 2017 horror-comedy film Happy Death Day, while a counterpart of hers from another dimension is one of the main protagonists in its 2019 sequel, Happy Death Day 2U. She is the roommate of the film's protagonist, Theresa "Tree" Gelbman, whom she desired to kill (as the Bayfield Babyface Killer) for having an affair with Lori's love interest Dr. Gregory Butler.

She was portrayed by Ruby Modine in her first villainous role.

Lori was a student at Bayfield University, a nurse at the campus hospital and the roommate of Tree Gelbman. Even though she always acted nice to Tree, she actually held a deep hatred for her, as well as Tree's snobby and obnoxious attitude. However, once Tree started having an affair with her Professor, Dr. Gregory Butler (who Lori had also sought an affair with), her hatred boiled to the point that she wanted to kill Tree and anyone that stood in her way.

She first attempts to kill Tree on her birthday by offering her a cupcake laced with poison. Tree refuses to take the cupcake by throwing it away. Later on that night, Lori dresses up in a black outfit and conceals her identity with a baby mask, which she took from the schools' football team merchandise. She distracts Tree by putting a music box in a tunnel where she walks in and when Tree bends down to get it, she sneaks up behind her and stabs her to death with a hunting knife.

Tree ends up in a time loop and thinks that her death was a dream, but then Lori once again kills her in the next loop by stabbing her again with a broken bong, but only after she kills her fellow sorority sister Danielle's boyfriend Nick by stabbing him to death. In the next loop, Tree complains to Lori that someone is trying to kill her. Lori suggests that Tree conceal herself in her dorm room. Later on that night, Lori breaks out of the bathroom and kills Tree once again by stabbing her to death.

In each of the loops, Tree tries to track down the suspects each of which could be the killer who is targeting her on her birthday. She first suspects Tim, but while he is looking at gay porn, she is killed by being stabbed in the stomach. Next, she suspects Dr. Butler's wife Stephanie, but spots her moments before the killer drowns Tree in a fountain. She next suspects Danielle, but when the two get into a fight, they end up in the path of a bus which runs them both over. In the next loop, Tree suspects someone who is dressed a black hoodie as the killer, but when she bludgeons the figure with a baseball bat, it is revealed to be another sorority sister named Becky. Lori again kills Tree by bludgeoning her with the bat.

Tree's final suspect is Gregory. However, while she is the hospital after passing out, she gets an x-ray which reveals some of the injuries she sustained while being killed in the previous loops. Tree searches through Butler's office to which she finds a baby mask. Then, Lori dressed as the killer appears and kills Gregory before chasing Tree. Tree manages to escape, but when she is pulled over by a police officer while driving away, she volunteers to be arrested to avoid the killer. Lori appears and runs over the cop before dropping a birthday candle on the leaked gas of the car which explodes and kills Tree.

Tree in another time loop sees a news report on television about a serial killer named John Tombs and suspects that he is the real killer because he is notorious for going after young women. She decides to go after Tombs at the hospital but while there, Tombs kills a security guard, takes his gun and escapes from his room. Tree attempts to defend herself by using a fire axe, but it has shot out of her hand. Her friend Carter Davis tackles Tombs and disarms him, but he is killed while protecting her. Tree manages to incapacitate Tombs, but realizes that if she stops the loops, Carter will stay dead. She goes up to the bell tower and hangs herself.

Tree in the next loop after resolving to be a better person prepares to go after Tombs. She sets her watch to 30 for thirty minutes so that it would go off during a black out, carefully steals the security guard's gun and tells him to call for backup. She enters Tombs' hospital room and tries to shoot him while he's still asleep, but the safety is on. Tombs gets up and fights Tree by slamming her into the wall. When the blackout occurs, she uses it to escape his line of sight and shoots him to death. Tree then finally eats the cupcake that Lori gave to her after her date with Carter and falls asleep, not knowing that the cupcake was poisoned.

Tree in the final time loop enters her dorm room where Lori greets her with the cupcake again. She tells her that she ate it the night before when she knows that she didn't. She then realizes that she died in her sleep and that the cupcake was poisoned, leading her to realize that Lori is the true killer. Since Lori works as a nurse at the hospital, she used Tombs as a back up and a scapegoat because of his history. Tree tries to coerce Lori to eat the cupcake, but when she refuses, she decides to take it to the police.

As Tree prepares to leave, Lori grabs her hair, slams her against a closet door and locks the bedroom door. She confesses to being the killer and is angry because of the affair between Tree and Gregory and that she was upset because Gregory preferred Tree instead of her. The two engage in a struggle as Lori tries to finish off Tree for good, but they are interrupted by Danielle who heard the noise from outside of the room.

Lori tries to act like nothing is happening while pinning Tree to the bed, but Tree takes the cupcake and shoves it into Lori's mouth after shouting "Eat It Bitch!!". As Lori struggles rubbing the cupcake out of her mouth, Tree grabs the ceiling lamp and kicks Lori out the window to her death. Lori lands in front of a fellow sorority sister named Emily, who screams in horror and runs away while Tree looks down at her roommate's dead body. 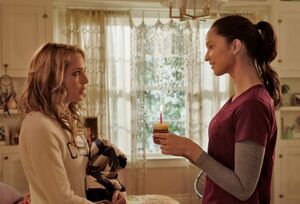 Lori trying to get Tree to eat her poisoned cupcake for the first time. 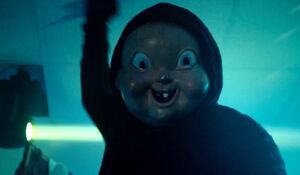 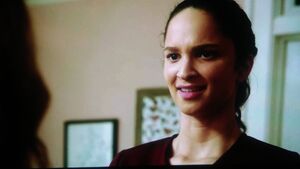 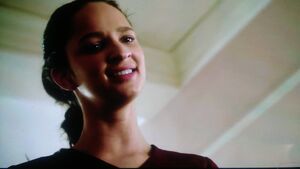