Listening to tapes of conversations with his clients.

Lorne Malvo is a manipulative hitman from Reno, Nevada who passes through Bemidji, Minnesota. While he is there, he influences a put-upon salesman Lester Nygaard with his malice and violence. He is the main antagonist in the first season of the television series Fargo.

He was portrayed by Billy Bob Thornton.

Lorne Malvo was a hitman working for Mr. Rundle in Reno, Nevada. He was hired to kidnap and presumably murder a man named Phil McCormick. He attacked Phil at his job and dragged him by his tie out to the parking garage where he stripped him to his underwear and tossed in in his trunk. On route to his destination, he hit a deer on the road and sustained a head injury. The crash caused his trunk to pop open, allowing Phil the chance to escape. Phil, however, died after running into the woods and freezing to death.

He went to the local hospital to get his wound examined, where he met Lester Nygaard. Lester told Malvo about how his nose was broken by Sam Hess, and about his long history of being bullied by Hess. Malvo then begins putting ideas in Lester's head about how Sam "doesn't deserve to draw breath." Lester makes a joke about killing Hess, but Malvo takes the suggestion seriously. He asks Lester for confirmation, asking "Yes or no?", but Lester gives no answer and leaves when his name is called. Later that day, Malvo visits Hess at his shop, insults his children, and states that he "just wanted to have a look" at him. That night, he murders Hess at a strip club by throwing a knife into the back of his head.

When Lester hears of Sam's death, he confronts Malvo at a local eatery and has even more violent ideas put into his head. Later that day, Lester murders his wife Pearl and calls Malvo for help. Lester planned to kill Malvo with his shotgun and pin the murder on him once he arrives, but local police chief Vern Thurman arrives firsts. Malvo appears when Vern is preparing to arrest Lester after spotting a blood trail leading to Pearl's corpse. It is then that Malvo shoots Vern twice with Lester's shotgun, with one of the pellets passing through Vern and lodging itself in Lester's hand. Malvo then goes downstairs and mysteriously disappears. He then steals Lester's car and is pulled over for speeding in Duluth, Minnesota. He threatens Deputy Gus Grimly, who lets him go out of fear.

The next day, Malvo visits a post office to retrieve a package sent by his employer which contains his new identity. The identity is Frank Peterson, a minister and respected member of the community. Lorne then meets with his next client, supermarket "king" Stavros Milos. Malvo is hired to track down the individual blackmailing Stavros, which he does after recognizing a smudge on the back of the note as the bronzer used by Don Chumph, the fitness trainer for Stavros' soon to be ex-wife. Malvo confronts Chumph and takes over the blackmail operation, using Don as his lackey in the endeavor. Deputy Gus Grimly, who had previously let Malvo go, spots him on the side of the road and arrests him for murder and car theft. While on the way to the police station, Malvo says "You're making a mistake", taunting him and saying that's what Gus will say a couple hours from now. At the station, Malvo alters his look with a pair of stolen glasses and other alterations to his attire. He uses his Frank Peterson personna to persuade the police to let him go. Gus is put on deskwork for the time being and he tells the captain "You're making a mistake". Hearing this, Malvo turns and smiles at Gus. When Gus confronts him on his way out asking how he could lie like that, Malvo gives him a riddle, asking "Did you know that the human eye can see more shades of green than any other color? My question for you is why. When you have the answer to my question, you'll have the answer to yours."

Meanwhile, Lorne begins toying with Stavros, killing his dog King and replacing his medication with adderall. He also rigs his shower to spray blood instead of water, and puts hundreds of crickets into Stavros' supermarket Phoenix Farms. Malvo does this to allude to the Book of Revelations, playing on Stavros' religious views. While Stavros decides to take the blackmail money back to where he originally found it in 1987, Malvo rigs Don to a excercise machine and tapes a shotgun to his hands. After firing a few shots out a window, Malvo takes his leave. When a SWAT team responds to the shots, Don is gunned down as it appears he is armed. Coincidentally, Stavros' son Dmitri is accidentally killed in a car crash during the ongoing whiteout, completing Malvo's Book of Revelations plot.

While driving in Duluth during the whiteout, Malvo's car gets trapped between two others. Two men, Mr. Wrench and Mr. Numbers, exit the cars and begin firing handguns and assault rifles at Malvo. Malvo escapes their initial assault and they lose him in the whiteout. Malvo then cuts his hand and leaves a trail of blood in the snow, which Mr. Numbers follows right into his trap. Numbers is stabbed in the back, with Malvo stabbing more and twisting the knife until Numbers answers Lorne's question of who sent them to kill him. When Numbers responds with "Fargo", Malvo slits his throat and leaves him to bleed out in the snow, also taking the Numbers' assault rifle with him as he leaves. Malvo then attempted to find and kill Mr. Wrench in the whiteout, but this is interrupted when Deputy Molly Solverson finds and shoots Wrench two times. Malvo then flees the scene.

Now set on finding out who is responsible for the attack on him, Malvo visits his employer Mr. Rundle in Reno, Nevada. When Rundle doesn't have the answers Lorne wants, he leaves, with screams being heard from inside once he reaches the parking lot, implying that he murdered Mr. Rundle. Malvo eventually traces the attack to the Fargo Crime Syndicate, and enters their main base of operations, massacring 22 people within a matter of minutes. Malvo then pays a visit to Mr. Wrench in the hospital, murdering the police officer guarding him. When Wrench awakens, Lorne taunts him on the death of his partner and his new position of unemployment with the Syndicate gone. However, Lorne gives Wrench the key to his handcuffs, respecting him for coming closer to killing him than anyone else. He tells Wrench that if he still feels raw about things after he heals up, to come track him down and try again.

Malvo now works in Kansas City, Missouri as a dentist named Dr. Michaelson. He is there to befriend fellow dentist Burt Canton so that he can track down and kill Burt's brother, who is in witness protection. He even goes as far as becoming engaged to dental assistant Jemma Stalone to make his personna seem real. While staying in Las Vegas for the night before going to meet Burt's brother in the morning, Malvo is recognized by Lester Nygaard, who was in the same bar by chance after winning the insurance salesman of the year award. Lester engages Malvo, who acts like he has never met him before and warns him to just walk away while his group is preparing to leave. Lester, now filled with confidence from his improved life and evasion of jailtime, refuses to give in and joins Malvo in the elevator. Lorne questions Lester, asking "Is this what you want? Yes or no?" When Lester says yes, Lorne pulls out his pistol and shoots Burt, Burt's wife, and Jemma, killing them all instantly. Malvo tells Lester about how the bounty he was working on for 6 months is now defunct, and tells Lester to help drag the bodies to a dumpster. Fearing his life was in danger, Lester slams Malvo in the back of the head with his trophy and runs away.

Lorne then follows Lester back to Minnesota and visits his old address only to find that he had moved. He then visits Lou Solverson's diner, asking where to find Lester only to leave without an address moments before Deputy Solverson and two FBI agents arrive to discuss how to track down Malvo. Meanwhile, Lester and his new wife Linda prepare to go to Acapulco to get away from Malvo and the police, but need to stop by their shop to get their passports. When Lester sends Linda, wearing his coat, to get the passports, Malvo emerges from the shadows and shoots Linda in the back of the head, thinking she was Lester. Malvo then casually leaves the shop, smoking a cigarette as he walks away.

While Lester tries to make himself seem uninvolved in the recent violence, Malvo stays in a remote cabin listening to a police scanner to monitor Lester's interactions with the police. Malvo breaks into the car of FBI agents Bill Budge and Webb Pepper, and uses their FBI credentials to call FBI headquarters and cancel their requested backup. He then visits a car dealership, stealing a car resembling an FBI car and taking the salesman hostage. Lorne then lies in wait outside the poilce station, and trails Lester when the FBI agents drive him home. While Budge and Pepper stand guard outside Lester's house, Malvo's car pulls up in front of them. They exit their vehicle and approach the car to see that the salesman is driving, his hands ductaped to the steering wheel. Malvo then approaches from behind them, shooting Budge in the head and Pepper in the neck, killing them both.

Malvo hides the bodies behind a pile of firewood before breaking into Lester's home. When he makes his way upstairs, he steps onto a hidden beartrap, mangling his left leg. Lester then exits the bathroom and fires a shot, which misses, and tries to shoot again but his gun jams. Lorne seizes the moment to toss Lester's salesman of the year trophy at him, breaking his nose and causing him to retreat back into the bathroom. Malvo then leaves, taking the FBI agent's car to get back to his cabin. When he arrives, he sets the broken bone in his leg and puts a splint on it before Gus Grimly, who was lying in wait after spotting Lorne exiting the cabin, approaches him. Gus tells Malvo that he solved the shades of green riddle, the answer being predators. Malvo congratulates Gus, who then shoots him 3 times in the chest. Malvo lies still, then jumps back to life, coughing up blood and sitting up in his seat. Shocked, Gus fires 2 more shots, hitting him in the mouth and temple. Malvo lets out one final breath before slumping back in his seat and dying.

With Lorne dead, his collection of taped conversations with clients, including Lester, falls into the hands of the police. With evidence of Lester's crime, the police track him down two weeks later at Glacier National Park. After a snowmobile chase, Lester runs onto thin ice, falls in and drowns.

For his part in finding and killing Malvo, Gus is awarded a citation for bravery. 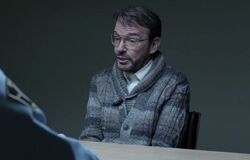 Malvo in his Frank Peterson personna

Malvo hiding from Wrench & Numbers in the whiteout 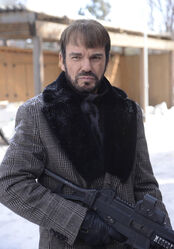 Malvo armed with an assault rifle

Malvo in his Dr. Michaelson personna 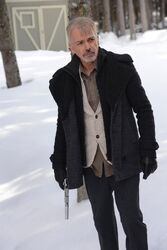 The death of Lorne Malvo
Add a photo to this gallery

Retrieved from "https://villains.fandom.com/wiki/Lorne_Malvo?oldid=2495457"
Community content is available under CC-BY-SA unless otherwise noted.