Seduce as many people as possible (failed).

Lorraine Massey is a minor villain from Stephen King's The Shining.

She was portrayed by Lia Beldam and Billie Gibson in the film and Cynthia Garris in the television series of the same name.

In the past, Lorraine was known to seduce young bellboys. Full of self-disgust, she one day committed suicide by slitting her wrists whilst taking a bath. After her death, she continues to haunt the hotel, seemingly becoming one of the strongest poltergeist there, as her room is the most feared.

In the past, a young Lorraine would usually seduce young bell boys who came into her room. In the present, Danny Torrance visited this room after a ball rolled to him from its open doors. Later, he claimed a "crazy woman" tried to strangle him. His father Jack then leaves the Golden Room in search of what his son claimed to have confronted earlier.

Jack cautiously enters Room 237 and hears noises coming from the bathroom. Instead, he finds Lorraine as a young, beautiful woman taking a bath and watches lustfully. Lorraine then sees what she views as an opportunity of sorts and pulls back the shower curtain. After standing up and stepping slowly out of the bath, she approaches Jack, completely naked. She then runs her hands from his chest up to his neck with a lingering glance. The two approach each other and enter into a passionate kiss. During the kiss, however, Jack catches a glimpse of their reflection in the mirror and sees the woman is actually a elderly woman — a walking, rotting corpse with rotten, sagging skin. Having discovered this, Lorraine cackles evilly and chases Jack out of her room, reaching for him with her arms stretched out, while Danny (using the Shining in his bedroom) foresees Lorraine's corpse rising out of the bathtub hauntingly by itself. As Jack manages to escape room 237, he locks the door and runs away horrified, while Lorraine remains in her room, cackling. 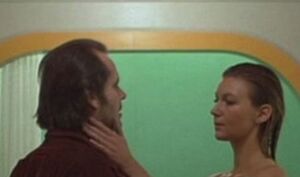 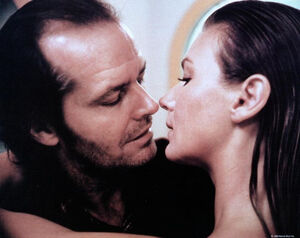 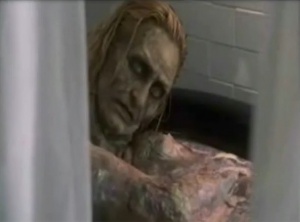 Retrieved from "https://villains.fandom.com/wiki/Lorraine_Massey?oldid=3305834"
Community content is available under CC-BY-SA unless otherwise noted.