Knowledge of duplicating the first flame

Killing anyone who comes near.

Atone for her sins.

The Lost Sinner is a minor yet pivotal antagonist from Dark Souls II. Her imprisonment within Sinners' Rise was purposely emitted to atone for her past sins. The Sinner has since gone mad from the years she stayed restrained and will eagerly kill anyone who approaches.

Little is known about the origins of the Lost Sinner, although from her dropping the Old Witch Soul in New Game Plus runs, it could be presumed that she may be a descendant to the Witch of Izalith. According to Sweet Shalquoir, the reasoning behind the Lost Sinner's isolation was because she committed what some believe to be the most taboo crime of all: attempting to duplicate the First Flame. Ashamed of her actions, the Lost Sinner restrained herself to atone for her sins. Over time the Lost Bastille was built around the Lost Sinner, her backstory seemingly forgotten.

The Lost Sinner can be found at the very bottom cell of the Sinners' Rise, a tall tower in the Lost Bastille to seal away the worst of the hollows of Drangleic. Before the battle, a small bug crawls into her mask, sending the Lost Sinner into a frenzy to attack the Bearer of the Curse. She swings her sword hard enough to snuff out the lanterns that light the room, meaning that the player has to fight her in darkness unless they use the Bastille Key to unlock two doors next to the arena to light the lanterns with a torch.

Even with all of the restraints on her body, the Lost Sinner is a very agile opponent who swings her sword very frantically. From slashes and thrusts, she can even leap into the air and slam her weapon down. If far away, the Lost Sinner will perform a charge. She can even parry the player as telegraphed when she holds her sword's hilt to her face, blocking any incoming attack and riposte them for extremely heavy damage. The player must defeat the Lost Sinner so as to access one of the Primal Bonfires required to unlock the path to Drangleic Castle. 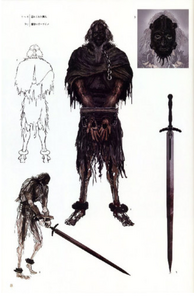 Concept art of the Lost Sinner.

The Lost Sinner with a bug on the eye hole of her mask. 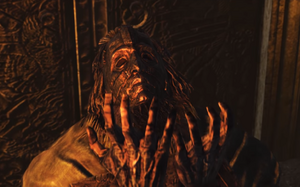 The Lost Sinner grunting in pain when the bug enters the eye hole. 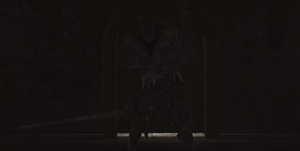 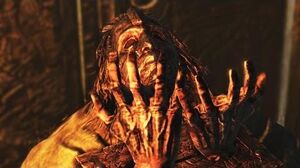 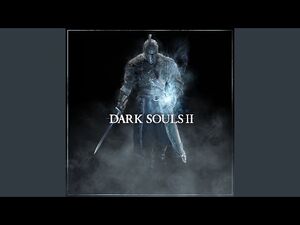