Governor of New Paris
Founder and leader of the Fourth Reich

Oberstgruppenführer Lothar Brandt, also known as Jacques Martel, is the main antagonist in Wolfenstein: Youngblood. After the rise of the Second American Revolution, he became disillusioned with the Nazi regime, and decided to topple it with his secret organization, the Fourth Reich and become Hitler's successor.

He was voiced by Mike Davies.

Lothar Brandt was born in 1918 in Germany, being the son of a prominent Nazi party politician and a silver screen actress. Lothar later joined the Nazi Party and the Wehrmacht, and rose to the rank of general. In 1957, Lothar met and married a French aristocrat named Julie, and they would have three children together at an unknown time. According to Abby, the two attacked the resistance captured Emmanuel, and Lothar watched Julie torture him.

After the Second American Revolution and the deaths of Frau Engel and Adolf Hitler, Lothar became disillusioned and dissatisfied with the current regime. Though he became the governor of New Paris, Lothar believed that the Third Reich would fall, due to seeing the regime as weak and the deaths of high ranking Nazi officials. Gathering like-minded individuals in the German Armed Forces, they created the Fourth Reich, which was aimed at toppling the Nazi regime from the inside so he could take over as Hitler's successor. Lothar's activities placed him under suspicion by the Gestapo, and the Berlin regime got wind of his activities. Lothar and Julie fled to the Paris underground just as the agents from Berlin arrived to assassinate him, but failed to kill him. Though he didn't escape unscathed, Lothar received injuries on the left side of his face. In the Paris underground, the two disguised themselves as resistance members, and plotted to topple the Berlin and New Paris regime. According to B.J. Blazkowicz, he met the Brandt's when he went to Paris, but discovered their identities and was forced to into hiding.

When B.J.'s daughters, Jess and Soph Blazkowicz arrived to find their father, Lothar and Julie had the two assassinate General Winkler so they wouldn't have anyone oppose them. The two later had the twins breach the Brothers, there different computer towers that connect between Paris and Berlin. The Brandt's disguises were exposed by the twins' ally, Abby Walker, who decrypted a message and downloaded a picture of Lothar. When the Brandt's attempted to kill the twins and Abby, the couple gloat about their plans before being attacked by the girls. Lothar and Julie battle the twins, and managed to escape before heading to Lab X.

While in the Siegturm tower, Lothar criticized Julie for failing to sedate the girls, feeling humiliated that they outsmarted them. After having foreplay with his wife, Lothar orders General Messer to start "Operation Ascension" by toppling the Berlin regime. Julie notices that the twins are coming up the elevator, and Lothar orders her to stand in front of the door. Julie is killed by the twins, and Lothar suits up in a experimental Da'at Yichud armor, and battles the twins on the roof of the Siegturm. Though Lothar appeared to have the higher ground due to his armor, the twins manage to kill him with the use of the God Key their father gave them.

Despite his death, General Messer and the rest of the Fourth Reich succeeded to conduct a coup in Berlin. The Fourth took over the Nazi empire, and possibly planned a counter offense to the Allies to retake the world once again. 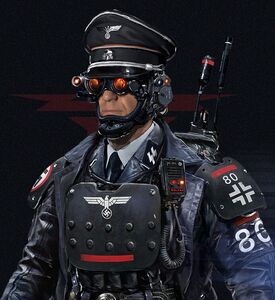 Lothar during his time in the Wehrmacht. 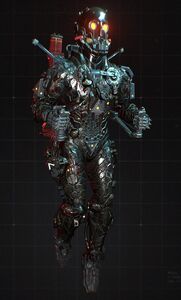 Lothar in his experimental Da'at Yichud armor.
Add a photo to this gallery

Retrieved from "https://villains.fandom.com/wiki/Lothar_Brandt?oldid=4385337"
Community content is available under CC-BY-SA unless otherwise noted.