Steward of the Twins

Help his father and the Lannisters to kill Robb Stark and end the northern rebellion (succeeded), keep serving his father, get rid of the Brotherhood Without Banners

Aristocrat, Traitor, Mastermind
Lothar Frey is the 12th son of Lord Walder Frey and his first son with his fourth wife Alyssa Blackwood. He is known as Lame Lothar due to a leg twisted at birth. He's considered more dangerous than most members of House Frey. At the beginning of the series he has been steward of the Twins for 12 years.

In the TV adaptation Game of Thrones he has been portrayed by Tom Brooke in the third season. In the sixth season he was portrayed by Daniel Tuite.

After King Robb Stark breaks the marriage pact to marry a Frey, the angered Freys leave his cause in protest. However, Lame Lothar later comes to Riverrun with his half-brother Walder Rivers for Lord Hoster Tully's funeral. He negotiates with Robb, agreeing that the Freys will return to supporting Robb and join him in his campaign to retake the North from House Greyjoy if Robb's uncle Edmure Tully, the new Lord of Riverrun, marries Roslin Frey, one of his half-sisters. This is agreed and Robb, his mother Catelyn, and Edmure start north for the Twins. However the wedding is a trap, becoming known as the Red Wedding. Robb Stark, Catelyn Stark and most of their forces are killed, with Edmure Tully and many other Northern and Riverlands nobles being taken captive. Lame Lothar is one of the main architects of the Red Wedding, plotting it out with Lord Roose Bolton, Lord Tywin Lannister, and Ser Rolph Spicer. He rigs the three tents much of Robb's army are feasting in to collapse. They have been soaked in oil and are set alight by flaming arrows, burning the men inside. He also puts crossbowmen in the gallery with the musicians. It is Lothar's idea to use the song "The Rains of Castamere" as a signal for the massacre to begin. Lothar assigns his half-brother Merrett Frey to make Greatjon Umber too drunk to fight. However Merrett fails, the Greatjon is too strong and is still able to fight. It takes eight men to put him in chains and even then two are wounded, one killed, and Ser Leslyn Haigh has half his ear bitten off.

Merrett Frey thinks that Lothar may be more dangerous then Edwyn Frey and Black Walder Frey, two of Walder Frey's great-grandsons high in the line of succession, Lothar quipping these brothers hate each other more then they do the other Freys. 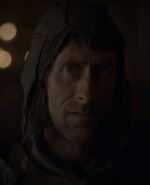 Retrieved from "https://villains.fandom.com/wiki/Lothar_Frey?oldid=3328957"
Community content is available under CC-BY-SA unless otherwise noted.