Lothar Zogg is the secondary antagonist of the 1998 film 3 Ninjas: High Noon at Mega Mountain.

He was portrayed by the late Jim Varney, who also played Felix Nash in Ernest Goes to Jail, and Dr. Otto in Dr. Otto and the Riddle of the Gloom Beam.

Lothar Zogg is the helper of a notorious criminal, Mary Ann "Medusa" Rogers. They plot with Medusa's dimwitted nephews Carl, Buelow, and Zed, a group of mercenaries, and her Jamaican sidekick C.J. to capture the amusement park Mega Mountain and hold the guests hostage for money.

The TV star Dave Dragon is about to retire due to poor ratings on his show, Lothar and his group Klaus and few thugs confronts him at the backstage, before he orders Klaus to knocked Dave out with the tranquilizer dart gun and capture him. Colt and Tum Tim witnessed this after they seek to get an autograph. Lothar orders his men to chase the boys down while stays behind and laughs at the unconscious Dave.

After Medusa have the picture of kids from the Avalanche ride’s surveillance camera, Lothar went to find her nephews at her request. Lothar then found her nephews at the roller coaster line and angrily admonish them for their antics as he threatens to report them to Medusa, but he’ll spare them if they can do her task by sending them to capture the kids after showing a picture of them and make her nephews to go work until he pops a kid’s balloon.

While Lothar is roaming through the park, he steals an ice cream from the kid in front of the mother, making the latter sobs for it while Dave approaches him and signs the kid’s autograph and follows him to the park’s control command center operations. Lothar was seen with Medusa and C.J. watching the news broadcast and grins before witnesses Dave fights against the mercenaries inside their base. When Medusa’s nephews are trapped on the ride on the surveillance monitor, Lothar decided to handle the situation since they failed to their task. After Medusa's nephews capture Rocky's girlfriend Amanda and tie her to a bottom of the Zinger Turbo Loop rollercoaster track, Rocky sets off to rescue her and Medusa then sent Lothar to capture the kids. Rocky is confronted by Lothar himself with a sword.

Rocky and Lothar both battle and he managed to kicked Lothar’s sword away before knocking to the ground as Rocky climbs up to untie Jennifer on the bottom of the track until Lothar attacks him again and chases him to the top of the roller coaster track as he starts to gloats about the fear coming behind his back as they reached and become frightened from the heights both hold each other comically to prevent themselves from falling and continued their battle. Lothar grabs Rocky’s throat with both hands and attempted to strangle him to death. Just before Lothar can do so, Rocky tosses a yo-yo around Lothar's ankle and trips him, causing him to release him, fall off the track, lands on the truckload of boxes and also into the hands of the authorities that are stationed outside of the park. Lothar chuckles nervously.

It implied that Lothar was arrested and sent to prison alongside with Medusa and her men for their crimes. 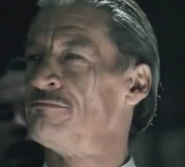 Lothar plotting with his thugs to capture Mega Mountain.

Lothar grinning evilly and preparing to finish off Rocky.