Villains Wiki
Register
Don't have an account?
Sign In
Advertisement
in: Pages with broken file links, Male, Ninjas,
and 52 more

Founder and Leader of Space Ninjas

Rather cunning at times

Kiya Watanabe, better known as Lothor, is a major antagonist in the Power Rangers franchise and the main antagonist of Power Rangers Ninja Storm as well as the two-part Power Rangers Dino Thunder episode "Thunder Storm". He is the disowned brother and uncle and archenemy of both Sensei Kanoi and Cameron "Cam" Watanabe the Green Samurai Ranger.

He was portrayed by the late Grant McFarland (who also played Sensei Kanoi Watanabe in his human form and voiced his guinea pig form).

Lothor is an exiled evil ninja master. At the beginning of Power Rangers Ninja Storm, he arrives on Earth with an army of evil space ninjas (space aliens trained in the dark ninja arts) that he has gathered in space and led them to conquer other planets, intending to conquer the planet and destroy all the protecting ninja academies with their ninja masters, allowing him to become the ultimate evil ninja master and ruler of the universe.

His minions at this point include Zurgane, Choobo, and his nieces, Marah and Kapri. Later, he would be joined by Vexacus, Motodrone and Shimazu. His foot soldiers were creatures called Kalzaks.

Lothor was particularly vexing because of the natures he varied between; while always evil, he could go in one episode from seeming like as big a goofball as any group of Power Rangers ever faced, right over to shades of the most sinister and violent ones. He could go from being a dignified and dangerous dark warrior to a vulgar wise-cracker, even breaking the Fourth Wall on more than a few occasions. He treated his hench-crew shabbily, whether they won or lost, yet seemed to have their every loyalty. He was extremely powerful in hand to hand combat, yet could often be turned back by simple methods applied forcefully at the right time.

Returning to Earth after a long exile in space, Lothor attacked the Wind and Thunder ninja academies and placed all their students in containment orbs. Three Wind Ninja cadets were made late by aiding someone in need, and found their school in ruins. Their sensei, Kanoi Watanabe, had survived the attack but been stuck in the form of a furry rodent. Despite the doubts of his son, Cameron Watanabe, Sensei made the three into Power Rangers, charged with protecting the world from Lothor and defeating him. While not the three best cadets, the Rangers rose to the challenge, despite many schemes and tricks from Lothor and his crew. They met their first great challenge when Lothor managed to deceive two Power Rangers from the Thunder Academy into believing Sensei had destroyed their school, and before that, their parents. Overwhelming the Wind Rangers at first, the two brothers were ultimately shown that they were very much on the wrong side. It would take another battle and deception by Lothor before they joined the Rangers on a regular basis.

Lothor's schemes, like his personality, ran the gamut from goofy to horrific, doing things as silly as having his own hypnotic TV sitcom to insects that delivered disfiguring (though able to be undone) sores through stinging. Possibly this variance contributed to the Rangers falling for a scheme which sealed away their powers, requiring a greater power to unseal them, which seemed unavailable. Seeking to aid them, not to mention frustrated by his role as 'Water-Boy' for the Rangers' technology needs, Cam Watanabe began a quest that sent him back in time to when his father and late mother were students at the Wind Ninja Academy.

He was greatly surprised to see that his always-serene father was once a hothead, but he was shocked to learn that his father had a twin brother, Kiya, a man Cam had never heard about or even recalled being mentioned. Despite Kanoi's initial suspicions and Kiya's scheming, Cam befriended his mother, the first female cadet in Wind Academy history, and holder of a powerful amulet. For his efforts to steal this amulet, framing another, Cam, for the theft and using dark magic (which is the first rule of Wind Ninja Academy, according to Ancient Sensei), Kiya was banished to outer space, despite Cam's pleas that he be destroyed. For now Cam realized, the uncle he had never known was in fact Lothor himself.

In his banishment sequence, Kiya seemed to morph into Lothor briefly, and mentioned an ancient evil warrior also named Lothor, whose mantle he would now seek. This 'elder Lothor' was never mentioned again, and no other information about him exists. Starting in this episode, Lothor would openly refer to the Watanabes as his relatives. No in-story reason existed as to why he didn't do this before. Back in the present, Cam, now the Green Samurai Ranger, was informed by his father that, once Kiya betrayed and disgraced his clan, part of his exile meant that Kanoi in effect had no brother, so Cam had no Uncle. The Rangers' powers were unsealed, and for a time, the team had less and less trouble destroying Lothor's monsters and stopping his schemes.

A series of schemes and counter-schemes by Lothor's hench-crew among and against each other amped things up, though. While such a mutiny and civil war among the villains would seem to benefit the Rangers, in fact it made the whole situation more dangerous and unpredictable, with even the stooge-like Marah and Kapri now among the best back-stabbers. Finally, all the monsters, even to Lothor himself, were destroyed by the Rangers.

Sadly, this tied right into Lothor's master plan. Blue Bay Harbor, the location for the series, was home to the Abyss Of Evil, an afterlife of sorts for villains, and as each monster and general was destroyed, it was sent there, until the bursting-full abyss was overloaded by Lothor's defeat. Facing an army of hundreds, the Rangers attempted to rescue both Cam, captured by the villains, and the Wind Academy Ninjas trapped at series' start. While this was successful, one by one, the Rangers had their powers stripped from them by Cam's amulet, taken by Lothor. Worse still, with the Abyss opened, every monster defeated came right back. Though badly outmatched, the three original Wind Rangers positioned Lothor in front of the Abyss, and unleashed their remaining Ninja skills against him all at once, knocking him back into the Abyss, which caused a reverse overload and sealed it. With their fellow cadets restored and Sensei back in human form, Cam and the Wind Rangers became instructors at the Wind Academy, where their students included the reformed Marah and Kapri, who had proven so good at being evil, Lothor abandoned them—causing them to suddenly rethink their position. With the abyss sealed, the generals and monsters, when defeated, stayed defeated. However, the cost had been the Rangers' powers, taken down with Lothor contained in Cam's stolen gem.

Lothor's name was mentioned by Mesogog when that villain first invaded the neighboring town of Reefside, and not in a positive light. Around one year after Lothor's defeat, excavation in the area plus Lothor's own efforts led to his escape from the Abyss at which point he immediately captured his brother and, disguised as him, duped and corrupted the former Wind Rangers, sending them on a rampage. While the Dino Thunder Rangers attempted to stop them and Cam and the former Thunder Rangers entered the Abyss to regain their powers from the lost amulet, Mesogog's servant Elsa approached Lothor, proposing an alliance. Fraught with treachery from the start, the alliance dissolved entirely when the brainwashed Rangers were cured, and Sensei Watanabe freed by Marah and Kapri, who lied to their uncle and said they had only pretended to be good. The villains' combined forces were no match for the two teams of eleven rangers, and at Mesogog's lair, the two villains went to war with each other. Gaining the advantage, Mesogog reduced Lothor in size and placed him in a stasis container, now looking very much like an action figure to be added to his collection.

Since no one else knew of Lothor's fate, it is widely presumed that he was destroyed along with the rest of Mesogog's lab only a few weeks later. This sent him back to the Abyss of Evil although this time, it was forever.

In an alternate reality, the blue Ninja Ranger Tori Hanson met an alternate and gentle Lothor who is the Mayor of Blue Bay Harbor. At first, Mayor Lothor did not wish to help Tori fight the 5 Evil Ninja Rangers of this universe who are nothing like her 5 benevolent best friends from her universe. When Tori was getting beaten by them, Mayor Lothor arrived with his group as well as some Kelzaks where they managed to defeat the evil Ninja Rangers at last. 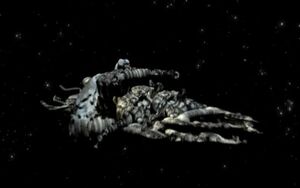 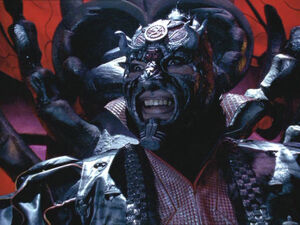 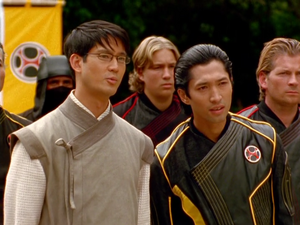 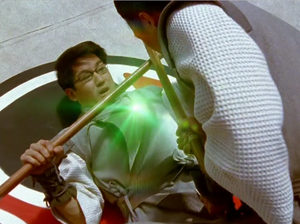 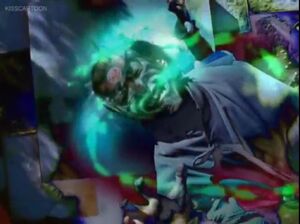 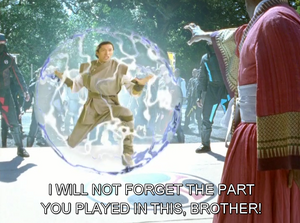 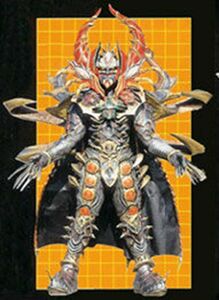 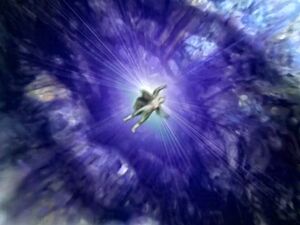 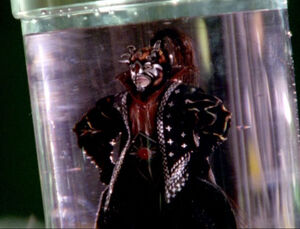