Senator of the Trade Federation

Passing bills to help the Federation

Help advance the interests of the Separatists

Lott Dod is a Neimoidian politician serving as the senator of the Trade Federation in the Galactic Senate. A scheming and deceptive bureaucrat, he was able to cover up for the organization's most questionable affairs. Despite his dealings and conspiracies with the Confederacy of Independent Systems, Dod keeps his post at the urging of those wishing a peaceful end of the Clone Wars.

Lott Dod was born on the Neimoidian homeworld of Neimoidia, becoming a prominent member of the Trade Federation by 33 BBY. As a representative in the Galactic Senate, Dod would use his manipulative skills to serve the organization's agenda, delay inquiries by the Galactic Republic and denying any dealings with the galaxy's most shadowy figures. This made him a formidable opponent to the few honest delegates in the Senate, while some of his machinations gained him allies, chief among them being senator Aks Moe of the Congress of Malastare and some members of the Office of the Supreme Chancellor.

At the time that Nebula Front assaulted the Trade Federation, Dod demanded that the Galactic Republic either make its own military or that the Neimoidians be allowed to defend themselves by their own means. Though he was denied, several other representatives joined him in his protest. When Chancellor Finis Valorum proposed that worlds from the Free Trade Zones join the Galactic Republic as full members, thus enabling taxation, Dod protested and accused the Senate of indirectly attacking the Federation and trying to break it. To solve the matter, Valorum proposed a summit on Eriadu to further discuss the issue, at senator Palpatine's advice.

The summit on Eriadu, during which Dod accompanied Viceroy Nute Gunray, resulted in the deaths of the other members of the Trade Federation Directorate at the hands of faulty security droids. Unknown to the senator, this move had been orchestrated by Darth Sidious, the Dark Lord of the Sith and the alter-ego of Palpatine. Using their diplomatic rights, Dod and Gunray fled the scene and were not disturbed with the investigation. In the end, the taxation was enacted, much to the Neimoidians' chagrin. However, the Trade Federation was not willing to give up without a fight. From his repulsorpod in the Senate Rotunda, Dod was ready to do anything necessary for the organization, despite the setback.

Angered by the legislation, the Trade Federation blockaded the peaceful planet of Naboo. At the orders of their ally Darth Sidious, Gunray, Settlement Officer Rune Haako and captain Daultay Dofine attempted to dispatch off the ambassadors sent by Chancellor Valorum and subsequently had the Trade Federation Droid Army invade the world. Despite their best efforts, Queen Amidala escaped with the help of the Jedi Knight ambassadors and eventually arrived on Coruscant, hoping that the Republic would intervene. However, Dod and Aks Moe object to the monarch and senator Palpatine' statements, asking that a committee be appointed to learn the truth, in an effort to delay any inquiries. The Senate session ends with the Queen voting against Valorum as Chancellor, leaving the other representatives to argue and demand the vote as well.

Even without the Republic's help, Queen Amidala and her allies are able to defeat the Droid Army and capture the occupation leaders. For their respective crimes, Gunray, Haako and Dod are sent on trial to Coruscant, but through bribery and the intervention of Darth Sidious in his guise of Palpatine, they escape final judgement and retain their respective positions within the Trade Federation.

Shortly before the outbreak of the Clone Wars, in 22 BBY, Dod was traveling along Skylane T-534D of the Fobosi District in an airspeeder when a malfunctioning Skyways Flyer automated pubtrans flitter, traveling down T-534D in the wrong direction, forced several commuters—including Dod—to collide with a water silo in their attempts to avoid the flitter. The senator was hospitalized and had to undergo serious surgery as well as Bacta treatment.

Even in this injured state, Dod would continue to act as the senator of the Trade Federation. In his appeal to the Senate requesting a seat for Trandosha, Crovessk of the Revessa Global Shipping used some of the Neimoidian's contacts. From his recuperative ward, Dod would argue against senator Rasit Brun of Rintonne's accusations of the Federation having supplied Aqualish terrorists with troops and weapons, following an attack by Vulture-class droid starfighters. Dod was also offended by one of senator Orn Free Taa's jokes about his speeder accident, even after the latter apologized. After recovering, the Neimoidian returned to his duties.

The Separatist Crisis culminated in the Trade Federation, the InterGalactic Banking Clan, the Techno Union, and the Corporate Alliance and the Commerce Guild signing on as members of the secessionist group. Due to the plaguing corruption and the economic need, the Galactic Republic chose to ignore the treasonous acts of such entities, though Dod himself would also work to convince the Senate that the Confederacy of Independent Systems was using his organization's assets without approval from its governing board. He further iterated the collaborators as "extremists" who did not speak for the Federation as a whole.

The truth was that Dod's true allegiance was to the Confederacy, seeing it as an opportunity to increase his own wealth and influence even more. Though he mostly conspired and did business with the Separatists far from the prying eyes of Republic Intelligence, some of his treacherous acts were uncovered. Even this was not enough to allow the Senate to relieve him of his duties and Dod remained at his post for much of the conflict, much to the chagrin of the few honest representatives of the Republic.

When the supplies of the planet Ryloth collapsed due to the Separatist attacks, the Jedi High Council sent Senator Bail Organa to negotiate a treaty with King Katuunko which would allow them to use Toydaria as a humanitarian base. Learning from TX-20 of this, Count Dooku had Lott Dod go to Toydaria and prevent the Republic from using the planet. On the planet, Dod interrupted negotiations Organa and made it clear Katuunko that the trade relations between the Federation and Toydaria would falter, Toydaria should opt, despite its neutrality, to supply the embattled planet. Although Katuunko officially agreed to the Neimoidian's demands, he secretly made a pact with the Republic and granted them Toydaria as a starting point for the supplies already brought. Though he learned of this, Dod was too late to stop it and unable to prove any treaty violation before the Senate. The politician departed, but not before threatening Organa.

Playing both sides another time came Lott Dod outside the Senate in action when he secretly to Cato Nemoidia with the Archduke Poggle the Lesser, the representative of the Geonosian Industries met, to build a large droid factory in operation on Geonosis. In his palace hidden, both discussed the further implementation of the plans, with the overflowed Senator from Scipio, Rush Clovis, she supported them in this endeavor. Here, however, Dod displeased that also Padme Amidala was at that time on Cato Neimoidia, which had been invited by Clovis. In reality, however, Amidala worked for the Jedi Council, the Clovis some time suspected to support the Confederacy, a compound which already guessed Dod.

To disable it, and to have a means of pressure against Clovis in his hand, which had threatened with financial cuts for the droid, he poisoned the senators at the evening dinner. Nevertheless, Amidala learned of the plans and was poisoned to ensure that the newly manufactured droid showed. Shortly thereafter, however, the poison unfurled its effect, and after Clovis Padmé had found ill, he handed them over to the care of Anakin Skywalker, who was also there. Clovis forced with his blaster the antidote from Lott Dod and accompanied the senator and Skywalker to their ship, left behind by the Jedi, however, whereupon Dod and Poggle presented him with some battle droids.

Dod asserted the neutrality of the Federation and declared that they take only their inherent right to claim, collect debts. Chuchi but succeeded with the Ahsoka Tano to obtain evidence that spoke for a separatist involvement in the blockade Pantoras. They infiltrated itself to the ship of the Trade Federation, where both were attacked by battle droids, under the command of the Separatists stood. In the Senate with this evidence confronts said Lott Dod, that it was the Separatists once again managed to infiltrate the Trade Federation to carry out their interests. Obviously have Sib Canay not acted in accordance with the Federation. Dod announced in the Senate that the blockade on Pantora repealed as compensation and free trade will again possible.

In the continuous war, the Senate convened a reinforcement of the clone army to compensate for the heavy losses of the past battles. As several senators, including Bail Organa and Padmé Amidala, voices rallied against the increase in troops and in the debate the impending bankruptcy of the Republic brought to language, Lott Dod opened the Senate that the impending bankruptcy of the Republic be prevented by the proposed law could, as it has been negotiated with the increase of troops and about a law on deregulation of banks. After the meeting was postponed to Dod withdrew and met in the Senate chambers with Card, a representative of the Bankers Association, and the Senator Saam. There he forged with the Muun plans to enforce the requirements in the Senate, however, rejected card to assassinate Amidala from. Instead, they decided that a targeted attack on the part of the Separatists on Coruscant should be carried out, as this would be change the mood in the Senate for the troop surge.

A short time before the proposal for peace talks was adopted by the Confederation, attacked some Infiltration droid to the city planet, so Dod raised his voice to proclaim the middle of the Senate, that the Separatist Alliance apparently would not be willing to make peace. This stopped the senators and were indignant enough to approve the law to deregulate the banks. Shortly thereafter, the Senate decided in spite of strong opposition from some senators with a narrow majority for an increase in troops, so that the profits for the Trade Federation and the Bank communities increased. 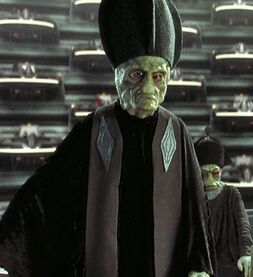 Retrieved from "https://villains.fandom.com/wiki/Lott_Dod?oldid=3278373"
Community content is available under CC-BY-SA unless otherwise noted.