The Curse of Millhaven

To kill as many people in Millhaven as possible.

Loretta, or Lottie for short, is the protagonist and villain of Nick Cave and the Bad Seeds' song, "The Curse of Millhaven".

Lottie is a 14 year old girl who lives in Millhaven. She proves to be psychopathic in nature and is the reason for all the chaos surrounding the town. One of her first crimes involved taking down warning signs around Lake Tahoo in late winter, resulting in 20 children drowning. Her second heinous act involved committing arson around Bella Vista slum, burning it and its inhabitants to the ground.

All of these crimes were ruled out as being mere "accidents"-putting all the citizens under the belief that Millhaven had been cursed. During Christmas year, she killed Bill Blake's son by bashing him in the head, and threw his body in One Mile Creek. She later decapitated a handyman named Joe and threw it into the fountain of the Mayor's residence. It was for her last crime that she was finally caught and imprisoned-she fatally stabbed an old lady by the name of Mrs. Colgate, however she did not die right away. She had managed to run to the police and proclaim Lottie as her killer before she died. Twenty cops then came to Lottie's home and arrested her and put her in an asylum.

During the end of the song, Lottie admits that she is a monster but that she is proud of every crime she has committed and that she does it for her own cruel pleasure. She also confesses to every crime that was ruled out as an accident. When they ask her if she feels any remorse, she states that her only regret is that she could have caused more chaos had she not been caught. She proclaims that she is happy in the asylum, feeling it's better than jail. 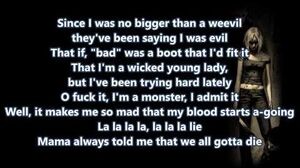 Nick Cave and The Bad Seeds - The Curse of Millhaven - Lyrics
Add a photo to this gallery
Retrieved from "https://villains.fandom.com/wiki/Lottie?oldid=3731653"
Community content is available under CC-BY-SA unless otherwise noted.