Order of the Lotus (formerly)

At the end of the Long Drought

The Lotus Assassins are an antagonist faction in the video game Jade Empire. They are paramilitary servants who enforce the will of Emperor Sun Hai and, following his death, Emperor Sun Li. They are led by Death's Hand.

The Lotus Assassins were founded by Emperor Sun Hai at the end of the Long Drought. They were originally the Emperor's monastic servants and protectors under his brother Sun Kin the Hand of Heaven, with the organization known as the Order of the Lotus. However, Sun Kin and Sun Li the Glorious Strategist betrayed Sun Hai during the ransack of Dirge, and Sun Kin ended up being turned into an enslaved minion called Death's Hand by the Emperor. Sun Hai disbanded the Lotus Monks and remolded them as his fanatically loyal enforcers. He granted them his own mausoleum in the Necropolis of the Imperial City as their headquarters.

For twenty years, the Lotus Assassins carried out the more brutal tasks that were deemed to be too important to be entrusted to the Imperial Army. This included silencing anyone who questioned the Emperor. Shortly after the siege of Dirge, a squad of elite Assassins was ordered to kill Sun Li's wife and newborn daughter for his treason. While Li's wife was killed, his daughter — later known as Dawn Star — was saved by the Assassin known as Sagacious Zu who killed his comrades and went into hiding with the girl. The Assassins also searched for Sun Li and the pieces of the Dragon Amulet, never suspecting the Glorious Strategist was hiding as a humble teacher in the remote village of Two Rivers.

By the Emperor's will, the Lotus Assassins started constructing an army of golems in his mausoleum. The golems were brought to life with the souls of the dead. These souls were initially extracted from the graves of the Necropolis. However, it was discovered that the golems are more obedient when empowered by the souls of those who died recently, especially if the death was agonizing. Ceasing to rob graves, the Assassins started butchering slaves instead. These slaves were acquired by forcefully taking workers from the Wall and making deals with slavers, including Gao the Greater, the leader of the criminal organization known as the Guild. It was through this slave trading that Sky's daughter Pinmei lost her life to Gao's slavers, making her an indirect victim of the Lotus Assassins. The Emperor made it appear like he knew nothing of this and that Death's Hand was secretly gathering power for himself.

Conflicts with the last Spirit Monk

In the first chapter of the game, Two Rivers is attacked by mercenaries led by a Lotus Assassin. They are defeated by Sun Li and his pupil, the last living Spirit Monk, with the former killing the Assassin personally. Shortly afterwards, Li allows one of his other students, Gao the Lesser, to discover his true identity. Gao tells this to his father, Gao the Greater, who in turn tells it to the Lotus Assassins. Death's Hand and his second-in-command, Grand Inquisitor Jia, lead the attack on Two Rivers and imprison Sun Li. In accordance to their modus operandi, the Assassins allow Gao the Greater's men to ransack the village afterwards in order to leave no survivors. The last Spirit Monk sets out with Dawn Star and Sagacious Zu to find Sun Li and get to the source of the attack.

The last Spirit Monk and their companions arrive in the trade village of Tien's Landing in the second chapter and cross blades with Gao the Greater and the Lotus Assassins. The Assassins have opened the Great Dam and drowned the river Tien's Landing is dependent on in order to gain access to the submerged ruins of Old Tien's Landing and locate the hidden piece of the Dragon Amulet. The head Assassin of the area, Inquisitor Lim, manages to steal the fragment from Chai Ka the Heavenly Gate Guardian with the intention of taking it to the Imperial City. The last Spirit Monk kills both Gao the Greater and Inquisitor Lim while taking the fragment back.

When the Spirit Monk arrives in the Imperial City in the third chapter, they have become wanted as "the Scourge of the South", but fortunately, their description is too vague due to the Assassins having very little information on them. The Spirit Monk is approached by Princess Sun Lian the Heavenly Lily who agrees to take them to the Imperial Palace in exchange for uncovering the Lotus Assassins' operations. By impressing a Lotus Assassin Inquisitor and/or Executioner, the Spirit Monk is accepted as a recruit and allowed inside the Lotus Assassins' fortress. By acting as an acolyte, they gather information on the golems' construction until they sabotage one Jade Golem, causing it to wreak havoc in the underground fortress and weaken the mausoleum's foundations. They are then confronted by Grand Inquisitor Jia who confirms that everything has been happening by Sun Hai's will. After the Spirit Monk kills Jia and retrieves the last piece of the Dragon Amulet, Death's Hand arrives. Sagacious Zu sacrifices himself to give the last Spirit Monk time to escape from the grumbling mausoleum.

The Lotus Assassins value in their members one trait before anything else: fanatic loyalty to Death's Hand and the Emperor. Through brutal training and the dangerous training grounds, the recruits are stripped of their former identities and twisted to regard their own lives forfeit and themselves as extensions of their masters' will. The Assassins commit depraved acts to maintain order in the Jade Empire and enforce the Emperor's will. They make assaults for specific reasons and leave no survivors to tell the tale. They use this secrecy to spread fear and keep the people in line. Guilt by association can be enough to draw their attention.

The other highly valued trait among the Lotus Assassins is competence. Only the best recruits, whether the strongest or the most cunning ones, are accepted as Lotus Acolytes. Failures often result in harsh punishments. The Assassins' lives are valued so little that they can get away with killing each other as long as they make it look like incompetence from the casualties' part. Many acolytes die in the rivalries between masters such as Gang and Shin.

There are two main guilds among Lotus Assassins: the Inquisitors and the Executioners. The former group is responsible for containing information about the Assassins' actions and insuring that the general population remains ignorant about the Lotus Assassins' true nature. The latter group eliminates people whom Death's Hand wants silenced. The Inquisitors prefer to use stealth and subtlety to carry out their duties, while the more battle-oriented Executioners are more open about their brutality. All the Assassins stain their hands dark with blood instead of dye like they used to as Lotus Monks. Sometimes Assassins deform themselves deliberately for intimidation purposes. They also beat their own bodies continuously in order to become completely deadened to pain. Many Assassins prefer to fight with the Viper martial style and the Tempest magic style. Some Assassins are capable of using magic to summon the spirits of the dead or command Rat Demons. 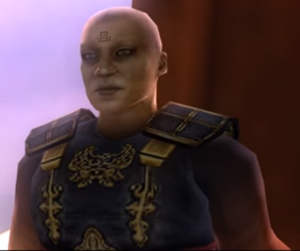 A Lotus Assassin in the regular uniform.

The Lotus Assassins during the second siege of Dirge. 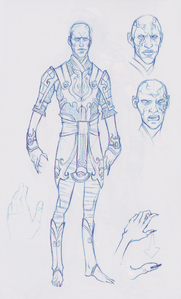