Percy Jackson and the Olympians: The Lightning Thief

Foods of out-of-this-world qualities
Enticingly fun activities
Unlimited money on plastic cards provided by Lotus Eaters
The hotel can cause those inside never to age while time goes on at a seemingly accelerated rate outside
Can put their guests under enchantment and have them never wanting to leave the hotel.

The Lotus Eaters are supporting antagonist in the 2005 novel Percy Jackson and the Olympians: The Lightning Thief and it's 2010 movie adaption of the same name. They are among the three guardians of Persephone's Pearls, along with Medusa and the Hydra.

Since ancient times, the Lotus Eaters trap people in their place by giving them lotus flowers, which has the effect of making those who eat it to never want to leave again. They currently reside in the Lotus Hotel and Casino and are the guardians of one of Persephone's Pearls.

Percy Jackson, Annabeth Chase, and Grover Underwood go to the Lotus Hotel and Casino to find the Pearl. Shortly after they entered, the Lotus Land Bellhop offers them complimentary Lotus Fun Books but they refuse it. Then, some waitresses gives them lotus flowers and they eat it, causing them to forget why they are here and to want to stay forever. During five days, they have fun in the casino while the waitresses constantly give them lotus flowers, however Percy hears Poseidon's voice who warns him to not eat it. He decides to stop eating and then meets someone who is there since 1971, making him realize what is happening. The Lotus Land Bellhop sees that Percy refuses to eat the flowers that the waitresses offer him and calls the security, while Percy goes to the dance floor where he gets Annabeth and Grover to stop eating the flowers. The security guards go after them so the three run in the Casino but some of them ambush Grover, who manages to defeat them all. Percy repels a guard and Annabeth uses a snooker cue to strike another, then Percy gets on a gaming table and beats two guards before grabbing the Pearl on a roulette. The three teenagers flee to the exit pursued by the guards and decide to steal a Maserati car on display. The guards try to surround them, but they crash through a window and then finally escape. 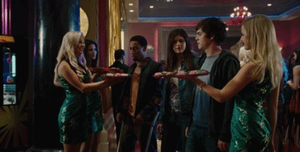