To make everyone else sad. (Briefly succeded; later failed)

Making everyone else miserable

Lou Gubrious (also known as Hal Larious) is a one-time villain from the Cartoon Network original series The Powerpuff Girls, only appearing in the episode "The City of Frownsville".

The Carnival of Happiness came to Townsville and everybody in The City of Townsville was as happy as could be, especially Bubbles, of The Powerpuff Girls. She went to the carnival so she could enter Townsville's 6th annual "Happiest Citizen Contest".

However, not everybody in Townsville was happy, because off the coast of the city, sat a big dark castle, on a rocky island. In that castle, lived a very sad and miserable man named Lou Gubrious, who spent his days crying his eyes out. His tears came out in giant, flowing, uninterrupted streams, enough to fill up the retreats of his mountainous island, and create a myriad of waterfalls, all over the island, which would flow naturally into the ocean around it.

Lou Gubrious complained and whined about how everybody in Townsville was happy, while he was sad. He devised an evil plan to make everybody else in Townsville sad, while also making himself happy. Lou had invented a machine called "The Miseray", which when activated, would take all the misery from himself, and send it out, to the rest of the world, while also taking the happiness of others, and inject it into himself.

When Lou activated the machine, an aura of depressing radiation swept The City of Townsville, and successfully made everybody in the town, start bawling their eyes out, acting depressed, and ruining everybody's good moods. This included The Powerpuff Girls, Professor Utonium, The Mayor, Mrs. Bellum, and The Talking Dog.

Lou Gubrious walked into Townsville, while everybody around him was crying. For once, Lou Gubrious was not crying. In fact, he was not even sad at all. He was overjoyed and had a bright and beaming smile on his face. Lou introduced himself by his new name, "Hal Larious", and accentuated his happiness, by prancing around Townsville, mocking everybody, who was sad. He went up to Bubbles, who had just won the "happiest citizen" contest, but said that due to recent events, there should be a recount on the winner. He then took the trophy for himself and gloated to Bubbles about how he had lost the contest to her every year, since the contest started, and was joyous to have finally won the contest for once.

The Professor told The Powerpuff Girls that if people keep crying at this rate, Townsville will be flooded with tears in 10 minutes. However, once the Giant Fish Balloon Monster started crying his eyes out, The Professor said that the time would be shortened to 5 minutes, considering how many eyes the Fish Balloon had and how large he was as well. The Powerpuff Girls tried to cheer people up, by going around and telling jokes, hoping that it would make people laugh, and put an end to all the crying, but all their attempts to get as little as one chuckle out of even the most jovial of citizens, proved to be completely fruitless.

Bubbles told a joke to a pigeon, using a banana as a prop, but it did not work. Bubbles peeled the banana and threw the peel away. Hal Larious just so happened to be passing by, while this happened, and while everyone in Townsville was watching, Hal slipped on the banana peel in the most hilarious and comical way possible, which made everyone else laugh their heads off. Hal was both hurt and humiliated, prompting him to start crying again.

Everything went back to normal in Townsville, and everyone (except for Hal) was happy. The formerly hilarious Hal Larious was now back to being the lugubrious Lou Gubrious, but he was not allowed to go back to his island of sadness. Now, Lou Gubrious was working as an unpaid employee at the carnival of happiness. There was a log ride at the carnival and Lou was chained up in shackles at the beginning of the ride. There, he cried nonstop, providing a waterfall, to make the log ride function for free. Lou presumably spent the rest of his days, working this involuntary job, and he quoted that it only hurts, when he laughs.

Lou Gubrious is an extremely miserable man who spends his entire life, crying nonstop. He seems to suffer from some kind of major case of depression, possibly caused by the gray storm cloud, that's always floating above his head. He is completely alone, and has no friends, and he lives in a dark cave on a deserted island, all by himself. Lou is very jealous of the fact that everybody else in Townsville is happier than he is, as he's never felt the emotion of happiness before. Despite this, Lou is a very smart inventor, who has the time and intelligence to construct a giant laser beam, that can the emotions of himself and others.

As Hal Larious, he is a joyful, cheery and clownish man with wide eyes, rosy cheeks, and nary a care in the world. He is also shown to be very rude to others, as he gloats about his emotional superiority to them. Hal teases other people for being depressed, while rubbing his happiness in their faces, just to make the pain even worse. He is also a very clumsy and somewhat idiotic individual, who was stupid enough to slip on a banana peel, and make himself the laughing stock of the entire City of Townsville for a while. 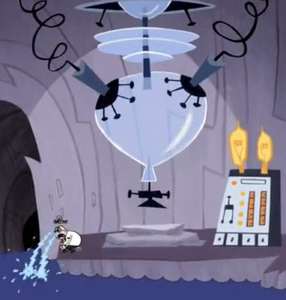 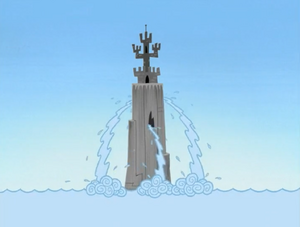 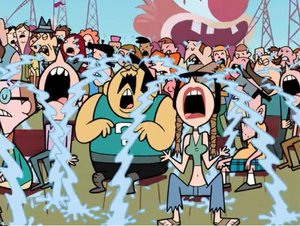 The Miseray's effect on people 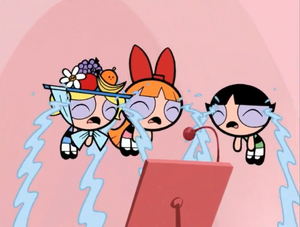 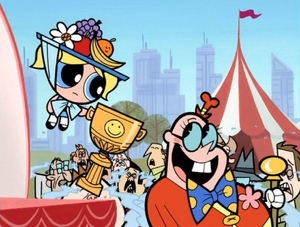 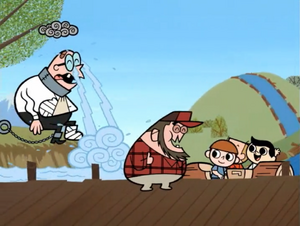 Lou's new job, working as the fountain for a log ride.