Keep New York on his watch by making sure no one does not do a crime.

Get rid of Top Cat, his gang and Officer Dibble (all failed).

Lou Strickland is the main antagonist of the 2012 HB animated film Top Cat: The Movie.

He was voiced by Jason Harris for the UK version. In the English dubbed version, he is voiced by Rob Schneider, who also portrays Woodrow Tyler in The Beverly Hillbillies, Volpe in The Adventures of Pinocchio, Clive Maxtone in The Hot Chick, and Bart and Eddie in The Reef.

He is the supposed son-in-law of Sergeant Murphy who becomes the new Chief of Officer Dibble's beat. He bought V.I.P. concert tickets for a Lazlo-Lazlo concert, but his tickets were stolen from Top Cat, after which would inspire most of his desire to get TC out of the way, especially as he would continue to foil his plots.

He has a rather lumpy shaped head, almost oblong-shaped, with crooked teeth and his chin sticking out noticeably. On his chin is a mole with a few hears visibly sticking out, and he seems to have a noticeable 5 o'clock shadow going on. His hair is a bright, vivid shade of ginger, slicked back with a huge cowlick. Lou's nose is quite angular, being almost triangular shaped. When close-up to his face, one can see that he has a number of pimples across his face, as well as wrinkles and liver spots. He wears brown pants hiked up rather high across his torso, nearly touching the collar of his white collar button-up shirt. He wears an olive green blazer jacket with bright red bowtie.

Despite his rather unattractive appearance, he considers himself to be the most handsome person of all time. He spends most of his appearances in the film bragging about his good looks and intelligence, and praising other aspects of himself. He also happens to be an incredibly greedy and selfish man, believing that robots are superior to humans, as humans are flawed creatures and often make mistakes. As time goes on he proves to be a rather strict enforcer, likely the reason for his name, imprisoning citizens for extremely ridiculous offenses. His self-centeredness and desire for power is a huge driving force through most of the film. 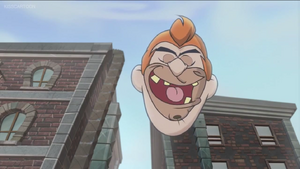 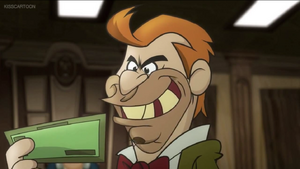 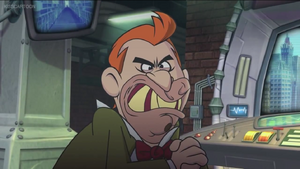 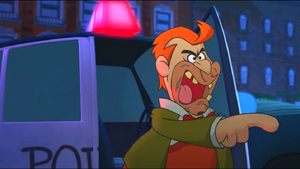 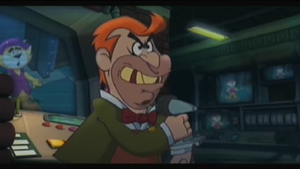 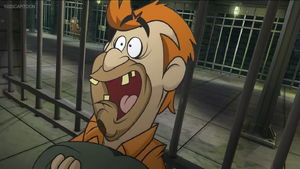 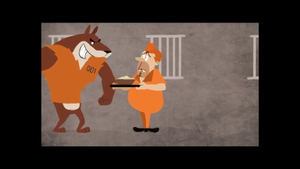 Strickland in the credits.
Add a photo to this gallery

Retrieved from "https://villains.fandom.com/wiki/Lou_Strickland?oldid=3781473"
Community content is available under CC-BY-SA unless otherwise noted.