Maintain his relationship with Charlie (failed).

Kill Cook, Charlie and Emma and get away with it (failed).

Louie is the final antagonist of Skins, appearing as the main antagonist of the series finale Skins: Rise. He was Cook's boss and Charlie's former boyfriend.

He was portrayed by Liam Boyle.

Louie first appears calling Cook telling him to come around to his house and asking him to pick up breakfast for him, when he arrives Louie asks him to drive his girlfriend Charlie around for a few days as she was currently looking for a house and needed somebody to drive her to the locations.

He later appears at a rundown building asking Cook to come around, he takes Cook into an office and the two discuss the houses Charlie was looking at. He then asks Cook if he noticed anything odd about her to which Cook denies (in spite of it being true). In a somewhat threatening and paranoid manner Louie tells Cook of his infatuation with Charlie and that he doesn't want him sleeping with her, much to Cook's unease.

He later appears calling Cook asking him to pick up Charlie and come around to the house which he bought. Once they arrive Louie has a small discussion with the group  before quickly turning it around to reveal that he knows of Charlie cheating on him with Jason and orders his bodyguard Rob to drown Jason in their swimming pool. A panic ridden Jason pleads and stuggles for his life as he is forced into the water while Louie merely looks on before ordering Cook to remove the body after he had finally died. This leads to Cook, his girlfriend Emma and Charlie running away from Louie since Cook knows that if Louie discovers he and Charlie had sex then he would face the same fate.

Louie was stalking Cook, Emma, and Charlie for the majority of this episode. His first physical appearance was when he finally found Cook, he lied by telling him he had come in peace and tells him that he was fine about he and Charlie and even says how he found the three, noticing Emma he quickly reveals himself to the latter and her parents.

In order to protect Charlie Cook lies and tells him Charlie had left. The lie turned out futile however as after Emma's parents left, Charlie came downstairs and Louie greeted her then told her he loved her then was told to leave by Charlie and Cook, seemingly cooperating with the two Louie left although was visibly hurt and angry.

Cook realized it wasn't safe for them to stay in that location anymore and the three left. As they began walking they noticed that the car belonging to Emma's parents was parked at the edge of the road despite nobody being in the vehicle, with the bags still in the car. Cook realized Louie must have kidnapped Emma's parents and stole her father's gun and the three went into the woods to hide. Cook began investigating by himself and heard two gunshots in the distance confirming that Louie murdered Emma's parents. He then searched and found place they could rest in during the night.

The next morning, Cook and Charlie discovered that Emma was missing and quickly began searching for her. Ultimately they found her dangling from a tree with a noose around her neck indicating that Louie murdered her by hanging her. Cook then searched for Louie to confront him and eventually found him standing near the car with Emma's father's rifle in hand he aimed it towards Cook. Cook then requested to Louie that if he kills him to not kill anyone else afterward, Louie shrugs this off and prepares to kill Cook.

Expecting this, Cook began taunting Louie by telling him every detail about his and Charlie's intercourse and then tricked him into thinking Charlie was behind him before tackling him to the ground. The two engage in a battle that quickly falls in the favour of Cook who quickly takes Louie down and leaves him short of breath and on the verge of collapsing from blood loss. Instead of killing him however Cook left him on the ground exhausted and weak and advised him to run before the police came, Cook and Charlie took the opportunity to escape while Louie was incapacitated and went their separate ways.

It is unconfirmed what happened to Louie afterward but he was most likely arrested, lied to the police about the true events or regained enough strength to flee the scene of the crime.

On the surface, Louie seems like decent, charismatic and friendly man, however, this is to disguise his true nature. Louie is a short-tempered and homicidal sadist.

Unlike Cook, who actually shows remorse for his murder of John T. Foster (despite the fact that Foster killed Cook's best friend Freddie), Louie completely lacks empathy, remorse, and guilt for the murder of his victims. He appears polite even after murdering someone in cold blood. He is obsessed with Charlie and is furious when she cheats on him, leading him to stalk and follow Charlie and Cook wherever they went.

Louie attempted to be polite to the two upon confronting them, however, Charlie just told him to leave, which he did, however, it was at this point where Louie completely snapped and let out all of his true villainy and murderous tendencies, by killing Emma's parents, Rob and Emma herself, he was going to kill Cook and Charlie. However, after being defeated by Cook, there was nothing he could do to complete his goals. 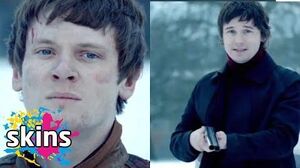 Cook vs. Louie-0
Cook defeats Louie
Add a photo to this gallery

Retrieved from "https://villains.fandom.com/wiki/Louie_(Skins)?oldid=4118953"
Community content is available under CC-BY-SA unless otherwise noted.