Driving around.
Filming crimes and accidents.
Caring for his plant.
Watching TV.
Ironing his laundry.
Sewing.

Corner the market for nightcrawling and avoiding karma (succeeded).

Louis "Lou" Bloom is the titular main protagonist of the 2014 film Nightcrawler, written and directed by Dan Gilroy. He is a petty thief who takes a job as a "nightcrawler", a journalist who illegally investigates crimes, and soon becomes obsessed with starring in his own story.

He was portrayed by Jake Gyllenhaal, who also played Dr. Johnny Wilcox in Okja, Anthony Claire in Enemy and Mysterio in Spider-Man: Far From Home.

Louis Bloom is a sociopathic, manipulative, smarmy, but unrelentingly dedicated individual. He will do whatever is necessary to achieve his goals and has no qualms of doing it, justifying his means with the end result. First impressions deem him a very kind and charismatic person, but those who know him long enough learn of his more sinister tendencies, quickly becoming pawns in his line of work.

Much of what he has to say is delivered through insincere business motivation phrases, indicating an aptitude in the business world. He is also very intelligent and uncannily perceptive, using his knowledge of Nina's fragile position in the company to extort her both financially and sexually.

At the film's beginning, Louis steals metal to sell for scrap. A security guard catches him violating a private property, who Lou then assaults off-screen and robs. While attempting to sell the scrap, he is rebuffed by his current seller when he asks for more money, and then later, a job. On his way home, Louis encounters a violent, fiery car crash that is filmed by Joe, a freelance cameraman who plans to sell his footage to the news for profit. Upon seeing the video on the local news, he sells a stolen bicycle to purchase a camera and police radio.

As he begins this new career path, naming his "company" Video Production News, he manages to only find and film petty crimes where he is pushed away by the police on location. One night, he manages to get a close, intimate shot of a shooting victim before he and another cameraman onsite are shooed away. He brings the footage to a small, local news outlet, where the footage is positively received by Nina, the channel's program director. However, the video resolution quality is lacking and she gives him a small monetary compensation. Louis is not easily deterred.

Listening to his radio, he manages to decipher police codes for various crimes and films the more severe ones, quickly gaining more money for better equipment. He hires an assistant, Rick, to handle directions and act as a second cameraman when necessary. Rick proves to be moderately inept, unable to give directions with Louis's erratic, arguably-illegal driving maneuvers and speeds.

One night, Louis and Rick drive to a home where a shooting had occurred. Louis passes Joe, who says that there is nothing left to film, as they have both shown up late. Louis, however, manages to sneak into the home and capture the home's owners talking to the police through a bullet-riddled window, also going as far as to rearrange the photos on the family's fridge to compose a better shot. Nina is stunned by the increase in quality, growing to respect Louis.

With the increase in profit, Louis purchases state-of-the-art camcorders, a new car, and higher-quality police scanners and radios. One night, Louis and Rick manage to arrive on the scene of a horrific car crash before the police could arrive. There, Louis moves a dead body from its original spot so that he can shoot it from a better angle and create a grabbing shot sequence. That same night, while watching Louis's ever-impressive footage, Louis asks Nina to dinner, threatening to quit working for her if she refuses. During their extremely uncomfortable dinner, Louis comes on sexually to Nina and reminds her of the fact that her contract with the news station, which is soon due to expire, hinges on the ratings gained from Louis's videos, and he threatens to leave if she doesn't accept his advances.

Joe approaches Louis, who wants him to work for him, but Louis rejects his offers, preferring to work and run things himself, straining their relationship further. That night, Rick leads Louis through a busy street, making them late for filming a deadly plane crash. Joe insults Louis as he boasts about his footage. With nothing to give Nina that night, she angrily berates him for his supposed laziness. This hiccup greatly upsets Louis, who resorts to sabotaging Joe's van, which crashes and violently injures him, giving new footage for Louis and relieving the pressure of future competition.

One night, Louis and Rick drive to a lavish home where a shooting is going on. Louis manages to film the two perpetrators and the license plate of their car as they enter their vehicle and drive away from the site. He then sneaks inside through the ajar door, finding a discarded shotgun and the bloodied corpses of three people inside. Rick manages to get Louis out before the police arrive, and is nonetheless scolded for his lack of assistance.

Upon seeing Louis's footage, her faith in him is restored, only to be shattered again when he asks for an outlandish price for it all. He urges her to give in to his offer, saying that he can continue the story now that the murderers are at large and can increase viewership by being the station with the most access to the terrifying crime. Otherwise, he threatens to sell the footage to a prime-time news station. She finally relents when he agrees to throw in footage of a pettier crime for free-that being the accident he arranged for his competitor, Joe.

The next morning, he is interrogated in his home by a pair of detectives, who tracked the footage to him, requesting for a copy. He tells them his story: he never got footage of the two killers and could not identify them or the specifics of their vehicle. That night, he talks with Rick, who is becoming more wary and untrusting of Louis and his practices. Louis convinces him to stay by giving him an over 200% raise and a positive performance evaluation.

The two of them track down the vehicle of the two murderers and their residence, prepared to create a story. Rick, suddenly realizing what Louis is planning, demands that he be given half of the reward for turning the two murderers in, becoming extremely uncomfortable with the illegal act that Louis is about to commit. After following the vehicle after it picks up the other man and stops at a restaurant populated with innocent bystanders, Louis calls 911 to alert them about the men's location. Against his wishes, though threatened with physical violence by Louis, Rick films the restaurant from another angle further down the street, prepared for the inevitable shootout that's about to occur.

Four policemen enter the restaurant and the two men open fire, killing several patrons and wounding a cop, one of the gunmen is killed in the hail of gunfire. One manages to escape to the vehicle, and the police, along with Louis and Rick give chase. As Louis drives, Rick captures as the police crash into other vehicles as they race through the busy city streets. Eventually, the vehicle is stopped by another police car, causing both to flip. Louis stops his car and films the scene, confirming that the driver is dead. When Rick goes to film the driver, it's revealed that he's still alive and shoots Rick several times in the chest. After the driver looks at Louis, who continues to film him, the police arrive and gun him down.

Louis approaches the dying Rick, telling him that he couldn't afford to keep him around, as his increasingly demanding and untrustworthy nature was not sufficient to Louis's business. Louis continues to film Rick nonchalantly until he finally succumbs to his injuries. As Louis gives the footage to Nina, the detectives come to confiscate the video, (correctly) suspecting Louis of orchestrating the murders, shootings, and chase to film for the news for profit. One of the detectives rails Louis for his criminal actions, but regardless of the unscrupulous acts Louis had done, they have no evidence against him, so they are forced to let him go.

Later in the future, Louis preps a small group of new interns for their first night with Video Production News, a pair of specialized and decorated news vans behind them. Before they go off, Louis assures them all that "he will never ask them to do anything that he wouldn't do himself". 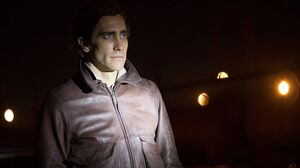 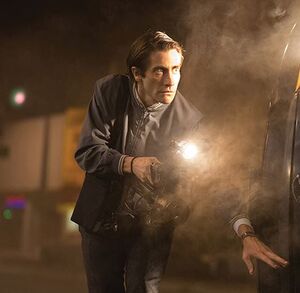 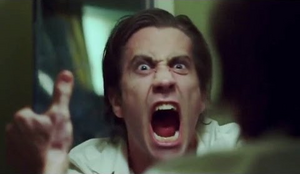 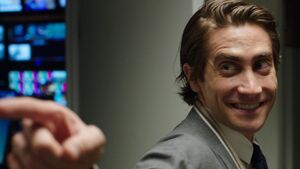