Making sure that his criminal involvement goes well without any trouble.

Kill Melaine for getting on his nerves during their money smuggling for Ordell Robbie (succeeded).

Louis Gara is the secondary antagonist of the 1992 novel Rum Punch by Elmore Leonard and its 1997 film adaptation Jackie Brown. He is a small time crook and ex-covict who was formerly friends with notorious gunrunner Ordell Robbie, but was later killed by Ordell after killing the latter's lover Melanie in a failed money smuggling job for Ordell.

He was portrayed by Robert De Niro, who also portrayed Johnny Ronchelli in Mean Streets, Vito Corleone in The Godfather Part II, Travis Bickle in Taxi Driver, Jake LaMotta in Raging Bull, David "Noodles" Aaronson in Once Upon a Time in America, Louis Cyphre in Angel Heart, Al Capone in The Untouchables, Jimmy Conway in Goodfellas, Max Cady in Cape Fear, Dwight Hansen in This Boy's Life, Neil McCauley in Heat, Gil Renard in The Fan, Ace Rothstein in Casino, Fearless Leader in The Adventures of Rocky and Bullwinkle, Don Lino in Shark Tale, David Callaway in Hide and Seek, and Senator John McLaughlin in Machete.

Louis Gara is an old friend and criminal accomplice of gun runner Ordell Robbie. After Louis is released from prison after an eight-year sentence for armed robbery, Ordell invites him to stay at his beach house with him and his girlfriend Melanie; Ordell also lets him sleep with another of his girlfriends, Simone. One night, Ordell calls Louis and tells him to come over to his car. He then opens the trunk to show him the dead body of Beaumont Livingstone, a henchman whom Ordell had killed to keep him from going to the police; it is an intimidation tactic to warn Louis about what will happen to him if he is disloyal.

Later, Louis and Melanie have sex, with Ordell's knowledge and approval. Melanie tries to pit Louis and Ordell against each other, but both see through it.

Ordell introduces Louis to his drug mule Jackie Brown, with whom he is planning a scam that will net him $500,000. He tasks Louis with switching the money with a decoy in order to fool Bureau of Alcohol, Tobacco, and Firearms agent Ray Nicolette, who is trying to arrest Ordell.

After Jackie double-crosses Ordell and takes the money, Ordell sends Louis and Melanie after her. Louis forgets where they parked, however, provoking Melanie to make fun of him. Angered, Louis warns Melanie to stop mocking him; when she keeps doing it, Liuis loses his temper and shoots her dead.

Louis and Ordell meet up, and Louis sheepishly admits to killing Melanie. Ordell accepts the situation at first, but the two soon get into an argument that ends with Ordell shooting Louis. As Louis goes into shock, Ordell shoots him again, killing him. 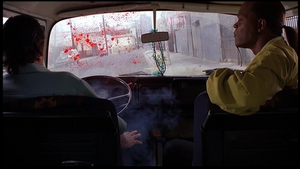