Villains Wiki
Register
Don't have an account?
Sign In
Advertisement
in: Fast and the Furious Villains, Criminals, Movie Villains,
and 23 more

Capture Ramsey and aid Jakande on his plans (both failed).

Louis Kiet is a major antagonist in Furious 7, the seventh installment of The Fast and the Furious film series. He is an acrobatic mercenary and martial artist who served as the second-in-command of Mose Jakande.

He was portrayed by Tony Jaa in his first villainous role.

Following the capture of Ramsey, Kiet is the second-in-command of Mose Jakande's convoy transporting her to the terrorist waiting on the other end of the path in the Caucasus Mountains. When he realizes that they're being followed by Dominic Toretto and his crew, he attempts to kill them with the arsenal equipped on their vehicle. Despite his efforts, Dominic and the others are able to destroy the back of their transport, allowing Brian O'Conner to board.

Kiet fights Brian, preventing him reaching Ramsey before he is knocked unconscious. Kiet regains consciousness as their transport heads for the edge of the cliff. Both Kiet and Brian head for the back of the bus, but Kiet reaches the end first. He closes the gate that traps Brian at the front and mocks him for being "too slow". Kiet escapes from the bus right before it goes over a cliff.

Later on, Kiet is seen assisting Jakande and his mercenaries when they ambush Dominic and Brian, along with government operative Mr Nobody and his unit, during their attempt to capture rogue freelance assassin Deckard Shaw at his hideout; it turned out that Deckard had formed an alliance with Jakanade. In the ensuing gunfight, Kiet manages to shoot Mr. Nobody whilst killing a number of his agents in the process before leaving with Jakande and the God's Eye they have regained.

As time passes, Kiet is sent after Brian following the destruction of the first radio tower that allowed Ramsey to partially hack her device, the God's Eye. He manages to intercept Brian halfway to his destination to the next radio tower. Brian evades him at first, closing a rolling shutter down behind him as he rolled into the next room, killing several of Kiet's men in the process with his firearm.

Halfway up the stairway, Kiet intercepts Brian again and knocks him down. The two go sliding down the stairs on the door and crash below. Kiet attempts to crush Brian several times with nearby objects. However, at the last second, Brian hooks Kiet's belt to a weight and kicks it down into an elevator shaft, which drags Kiet along with it to his death. Before he is pulled down, Brian taunts him "Too slow!", like he did in the mountains as revenge for what Kiet had done to him earlier on.

Kiet with his men. 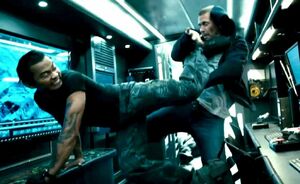 Kiet waiting for Brian to come out of hiding.