To build the "City of the Future" and kill Darkman (all failed).

Louis Strack Jr. is the main antagonist in the 1990 film, Darkman.

He was portrayed by Colin Friels.

The billionaire owner of Strack Industries, Strack is the son of Louis Strack Sr., who, when he was a teenager, made him work "high steel," putting together skyscrapers for his father several hundreds of feet up in the air. After taking over the company from his father, Strack's goal is to purchase and demolish rundown waterfront property and rebuild it as a futuristic city, which he terms the "City of the Future." To this end, he hires mobster Robert G. Durant and his gang to drive out anyone who refuses to leave and also bribes city zoning officials in order to obtain the necessary permits to build. His lawyer, Julie Hastings, discovers a document proving Strack's bribery, which she leaves at her boyfriend Dr. Peyton Westlake's lab. She doesn't discover Strack's involvement with Durant, however. Strack plays innocent and insists he is crooked but has good intentions. He has some feelings for Julie, as well. When he inquires about the location of the document, he warns Julie that Durant might want it, and is a very dangerous man. Thinking she's protecting herself and Westlake, Julie tells him where the paper is.

Strack then sends Durant to collect the paper from Westlake's lab. The gangsters torture and burn Westlake and murder his assistant Yakitito, and then abscond with the document, returning it to Strack. Westlake is thought dead (in truth becoming the faceless vigilante Darkman), and a grief-stricken Julie is consoled by Strack, who continues behaving as though he is good and unconnected with Durant. In the meantime, a vengeance-driven Darkman (unaware of who Strack is) is using his "liquid skin" to impersonate members of Durant's gang and sow distrust throughout their organization.

Julie discovers the truth about Strack's connection to Durant when she finds the document in Strack's office, and when confronted about it Strack admits the truth, but insists Julie stay with him and not the badly-burned Westlake/Darkman, showing her the already partially completed city. She spurns him and leaves. Strack, angry that Durant failed to "excise" Westlake, decides Julie will lead him to Darkman. He gives Durant a Strack Industries helicopter and sends him to kill Darkman. Some of Durant's men kidnap Julie whilst Darkman turns the tables against Durant, killing him by causing the helicopter to crash into a freeway overpass. The stylized "S" insignia of Strack Industries on the helicopter leads Darkman to figure out who Strack is, and, disguising himself as Durant, comes to the construction site where the City of the Future is being built.

Strack arrives with a captive Julie and the three of them go to the top of one of the partially finished skyscrapers, where a henchman awaits. Strack tests "Durant" by telling him he's glad he survived the helicopter crash because, "I'd hate to see your kids deprived of a role model." Darkman, unaware that Durant was childless, replies, "They do look up to me," giving himself away. Strack unmasks his heretofore unseen foe and chides him for destroying out of revenge rather than to "build something better," as he does, and boasts that everything around them belongs to him because his company built it.

The two fistfight on the building, with the nimble Strack, due to his experience working high steel, having the clear advantage. He and the henchman with him sling chains at Darkman, and Darkman ends up hanging the henchman upside-down with a cable around his ankle. Strack grabs a rivet gun and fires at Darkman, accidentally hitting the cable holding his henchman up, dropping him to his death, before cornering Darkman and preparing to kill him whilst boasting that he "knows Julie quite intimately." An enraged Darkman gets his second wind, rescues Julie, and then holds Strack off the side of the building by his ankle.

"Go ahead!" taunts Strack. "Do it, Westlake! But think of this! If you let me fall, you'll be as bad as me! Worse!" Darkman hesitates, and Strack laughs, adding, "You can't! I know you too well! Dropping me is not really an option for you! It's not something you could live with!"

Darkman releases Strack's ankle, and the billionaire promptly plummets out of side to his doom to the sound of chiming church bells as Darkman solemnly observes, "I'm learning to live with a lot of things."

Darkman VS Army of Darkness

After Julie (who has become possessed by the Necronomicon Ex-Mortis) resurrects Robert G. Durant as a Deadite, the two make their way to a construction site formerly owned by Strack. While using her magical abilities to begin construction of a temple, Durant comments on the irony of Julie building her headquarters on a site belonging to her ex-lover. He then asks her why she didn't resurrect Strack instead. Julie coldly states that Strack was cremated, and not worth reconstituting.

Superficially charming on the outside and possessing a way with women, Strack is nonetheless a cold, callous individual. His wife held "certain deeds" and so he arranged for her to die in a plane crash so he could have them, and, in a subplot cut from the film, Strack also has his father murdered by Durant's gang so he can have control of the company. Despite the openly chummy relationship he has with his underlings and allies, Strack cares nothing about them in the end, seeing them merely as tools, as evidenced by the uncaring shrug he gives when he accidentally causes the death of the henchman assisting him on top of the building.

Strack possesses no superhuman abilities and has above-average agility and physical strength. He is a calculating manipulator and believes he is entitled to have everything that he wants because of his power and money. He is quite fit and nimble, and although he ordinarily prefers to let henchmen do his dirty work for him, he is an adept fist-fighter and keen enough to stage his and Darkman's fight in a location where Darkman is at a disadvantage. 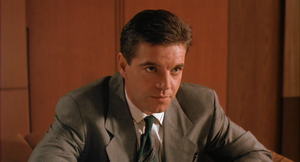 Strack having a meeting with Julie Hastings. 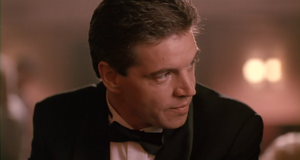 Strack with Julie at a party. 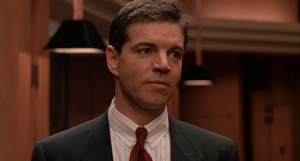 Strack confronts Julie after she becomes suspicious of his business actions. 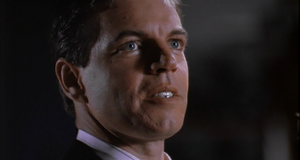 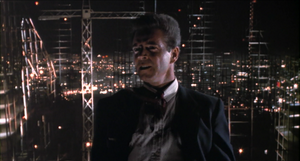 Strack boasting of his business empire. 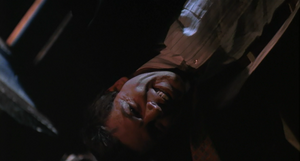 Strack taunts Darkman and tempts him to drop him from his skyscraper. 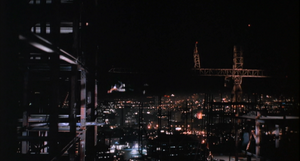 Strack is dropped to his death. 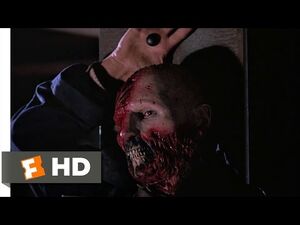