Louise Halevy is an antagonist in Mobile Suit Gundam 00. After the incident caused by Nena killing all her family, she decides to join A-Laws and Innovator side for the sake of avenging her family's death and changing the world with their extremist ideals.

She is voiced by Chiwa Saito and Kelly Sheridan in English version.

Before the attack of Nena Trinity, Louise was a cheerful and spoiled girl that liked to boss around Saji. However, her life changed when Nena Trinity killed her parents. This made her to become hellbent on avenging her parents' death and grown a hatred towards Gundams. She also desired peace, thus she joined A-Laws.

After her family was murdered by Nena Trinity, she vowed revenge on the Gundams and Celestial Being. She didn't know that her mentor, Ribbons Almark was using and taking advantage of her and Nena was one of Ribbons's children.

She first appeared during the A-Laws's assault on the colony Proud. She is in her GN-X III and is ordered to observe as this is her first battle. When the Seravee Gundam appears and take s down a GN-X III, Louise was frozen in fear and had to return to the ship to take some anxiety pills.

She then takes part in multiple battle against the Celestial Being, in which after one of the battle that cause Soma Peries to be missing in action, Louise offered herself to pilot the Ahead Simultron to avenge Soma's "death".

Eventually, during the assault on the Celestial Being's asteroid base, Louise found out that Saji Crossroad is in the 00 Raiser. Soon, her mentor, Barack Zinin,, was killed by the 00 Raiser, Louise was one of the pilot that witnessed his death.  When Louise returned to the ship, she mistaken Saji as a member of Celestial Being, thus, she deleted all of Saji's photos from her phone.

Soon, Louise took part in an assault to the Ptolemy 2 when the Celestial Being ship was low on power. At first, since Devine Nova in the Empress was able to disable the Arios and Seravee Gundams, they had the upper hand. However, there was a sudden coup d'état among the federation force and the AEU Elevator was taken over as a result, thus forcing them to retreat.

After the destruction of the AEU Elevator, Kati Mannequin had Andrei and Louise to help shoot down the falling pieces of the elevator.

When returned to space, Louise was switched to pilot the Regnant. She, together with Graham Aker, was sent by Ribbons Almark to take part in a "special mission". She encountered Nena Trinity in the Gundam Throne Drei, and Louise recognized it as the one that killed her parent. Louise savagely attacked Nena and quickly reduced the Throne Drei into a cockpit. Louise then impaled Nena in the cockpit with GN Fang, ultimately killing Nena and avenging her parents' death.

During the battle at L2, Louise attacked the 00 Raiser. She even tried to grab 00 Raiser so that the three Gaga can kill them all, including Louise herself. However, Saji launched GN Missiles to destroy two Gagas, thus only one could have been collided with, knocking Louise out. When Saji brought Louise to L2, Louise woke up and tried to strangle Saji, but Louise soon saw the ring Saji brought her years ago, causing Louise to scream in pain and faint. Setsuna soon unleashed GN Brust, flooding the ship with GN particles. Then, Louise regained conscious and cried in Saji's arm, marking her redemption. 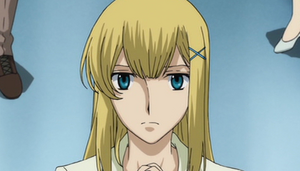 Louise Halevy in the movie
Add a photo to this gallery

Retrieved from "https://villains.fandom.com/wiki/Louise_Halevy?oldid=4225261"
Community content is available under CC-BY-SA unless otherwise noted.