Help The Boys find out who was responsible for killing supes (comics only; succeeded).

Vasilii Vorishikin, better known as Love Sausage, is a major character of The Boys comic book series and an ex-superhero where he serves as an anti-hero by helping The Boys investigate the exploding supes in Russia as well as participating in the murder of Stormfront. He also appears in second season TV series adaptation of comic book series as a minor antagonist.

In the Amazon adaption, he was portrayed by Andrew Jackson.

Not much is known of his past, other the fact that he is Russian, and prior to becoming a superhero he was a former cop, tank commander, and communist. He was a member of The Glorious Five Year Plan, who fought crime in unlawful and unjust ways alongside his teammates before retiring and owning a bar in Moscow.

However, sometime later, Vought-American implanted modified Compound V's into supes at Russia which causes their heads to explodes which leads The Boys (Billy Butcher, Frenchie, Mother's Milk, Hughie, and The Female) to investigate an enlist his help in the process.

Love Sausage would go on to wrongfully give The Boys "vodka" (actually a beverage made out of brake fluid) as well as play poker with them to pass the time before parting ways after tracking down the culprit who sabotaged the Compound V.

However, Stormfront alongside his team Payback would go to Russia to hunt down and possibly kill The Boys leading to Stormfront's bloody death at the hands of The Boys and Love Sausage himself who violently beats and stomps him to death.

Sometime later after the death of Homelander, Billy Butcher would go on a rampage, hunting and killing anyone with Compound V in their system including his friends, starting with Love Sausage himself. Since he bonded with Hughie during their interactions together, he organised an automated email to be sent to Hughie, warning him of Billy Butcher's possible intent to kill him aswell by leading him to a phone-call to call which automatically sends the email to him.

However, Love Sausage wasn't able to save himself in time and in return, gets blown up by Billy Butcher via a rocket launcher, slowly dying a painful death due to his superhuman durabilty.

In the TV series, Love Sausage makes a brief cameo at Sage Grove Mental Institution as one of the supes held captive there for experimentation purposes, first seen in his room on the CCTV at the security room where Mother's Milk points out his abnormally large penis. He is later seen in the CCTV cameras murdering various doctors and orderlies with his elongated penis during the riot.

Later on, when Mother's Milk, Frenchie, Lamplighter, and Kimiko are taking cover in a lab, Love Sausage appears and strangles Mother's Milk with his elongated penis before getting knocked out by Kimiko. It is unknown to whether he escaped or was put back in his cell afterwards.

Love Sausage alongside The Boys beating Stormfront to death. 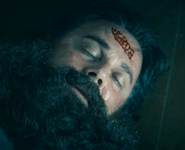 Love Sausage after being knocked out by Kimiko.