Head of the Abismo Island laboratory

Investigate for the Lords of Alchemy.

Aid the Lords of Alchemy in establishing a utopian world order by fusing Ryu Hayabusa's Divine Dragon DNA with the "God Egg" to give birth to a deity.

Lovelace is a villainess and a brilliant British scientist who is one of the Lords of Alchemy alongside the Regent of the Mask. She is a supporting antagonist in Ninja Gaiden 3: Razor's Edge.

Lovelace wears a longish white jacket with a short white skirt, and a see-through shirt, along with some white high heels and white gloves. She also wears a good amount of jewelry, and has short blonde hair, with light blue eyes, that are the same color as the Regent's.

She was voiced by Nicola Clarke.

Lovelace works in the LOA laboratory on Abismo Island and she is one of the lead researchers within the cult as well as one of their elite members who works alongside the Regent, serving under their "Chairman". After Mizuki McCloud knocks Ryu unconscious, Lovelace has him brought into the laboratory and throws him into the virtual simulation environment as a test subject, controlling where he goes and throwing several obstacles in his path.

When Ryu escapes, Lovelace takes Mizuki away from her daughter, Canna, and drags her away as bait for Ryu. As Ryu finds the "egg of a god" created by LOA, Lovelace appears again with the Regent and Mizuki. Lovelace reveals that while Ryu was unconscious, they took a sample of his DNA (due to the fact that his Dragon Lineage shows his family were descendants of the union between the Divine Dragons or Dragon Gods as they are called and the humans under their guidance, intending to fuse it with the egg to give birth to a god.

However, the Regent decides that she would be useful if she was fused with the egg, so he pushes her into the egg's container. Lovelace fuses with the egg, and a prototype goddess is created. Ryu manages to defeat and behead her before the laboratory begins its self-destruction. But as he begins to leave, her head tries to attack him, but he slices it in two, killing Lovelace for good. 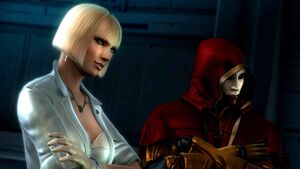 Lovelace and the Regent of the Mask, 2 well-known high-ranking members of the Lords of Alchemy.
Add a photo to this gallery

Retrieved from "https://villains.fandom.com/wiki/Lovelace?oldid=3528798"
Community content is available under CC-BY-SA unless otherwise noted.