Engineers of the Loveless Alliance

Loveless' Spider Crew are a group of supporting antagonists of the 1999 film Wild Wild West. They are engineers (with bizarre prosthesis) working for the Loveless Alliance, assigned by their boss Arliss Loveless to maintain control of his greatest weapon: an 80-ft mechanical tarantula that he intends to use to overthrow the United States government and divide the nation amongst themselves.

Following Loveless's decimation of a nearby town with the giant spider, Artemus Gordon and James West head over in their flying vehicle to stop him and save President Grant. As they crash their vehicle into the spider's cockpit (killing Munitia in the process), West ends up into the engine room, where he meets the first crewmember, who has giant bronze blades for his hands (even more stronger to slice off a deadly blade fitted inside West's boot). The second crewmember comes by to fight West, revealing to have a metal spike run through his skull, and the third one (with a lazy eye) hollers as he tries to attack West with a shovel.

Though it would appeared that the three crewmembers had the upper hand, West turns the table by fighting back against them. He manages to restrain the first crewmember by chaining him up and send him out from the railing, leaving the first crewmember to be hanged to his death. West then uses a giant wrench to smack the second crewmember on the head before throwing him into several large gears, killing him instantly. The third crewmember then attempts to best out on West by performing martial art moves, saying that he learned them from a Chinese person. Undaunted by this, West kills the third crewmember by smacking him in the head with the same shovel.

Fed up with his crew's failure and the loss of his two remaining mistresses Amazonia and Miss Lippenrieder, Loveless decides to personally deal with West himself. However, Loveless accidentally hits the spider's control lines in a failed attempt to shoot West, causing the spider to lock itself before it could plunge into a big cliff. This causes both West and Loveless to fall off the spider, though West saves himself by grabbing the first crewmember's ankles as the latter is still chained to the spider while Loveless falls screaming to his death below. 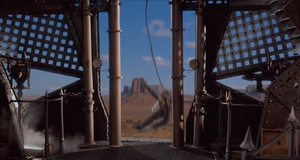 The first crewmember being hanged to his death. 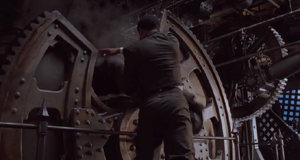 The second crewmember being thrown into large gears by West. 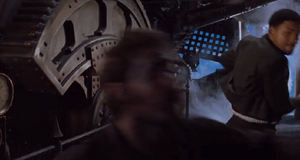 The third crewmember being smacked on the head by West with a shovel. 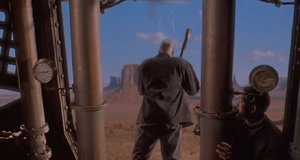 The fourth crewmember falling to his death after his metal skull shortens out.
Add a photo to this gallery

Retrieved from "https://villains.fandom.com/wiki/Loveless%27_Spider_Crew?oldid=3890506"
Community content is available under CC-BY-SA unless otherwise noted.