Lt. Roger Hedgecock is a supporting antagonist in the 1987 film RoboCop, and the secondary antagonist in the animated TV series RoboCop: The Animated Series. He is a corrupt leader of the Detroit Police SWAT until his betrayal, after he followed Dick Jones' orders to destroy RoboCop. He is indirectly responsible for the Detroit Police Strike and become an outcast after he followed the orders which is put to an end by The Old Man and his fate after this is unknown and his SWAT team still appears in the sequels.

He was portrayed by Michael Gregory in the first film, and voiced by Rex Hagon in the animated TV series.

Lt. Hedgecock first appears in the Detroit City hall negotiating the former council member Ron Miller who holds Mayor Gibson and his staff hostage demanding his job back which Lt. Hedgecock fails because he carelessly goaded Miller and nearly got the mayor killed up until RoboCop saves the mayor's life and Ron is then arrested afterwards.

However Lt. Hedgecock later betrays Detroit Police, having taken control of SWAT to follow Dick Jones' orders in destroying RoboCop. He and his SWAT team arrive at the OCP parking complex confronting Robocop who had just escaped the ED-209. Before they open fire RoboCop's comrades Kaplan, Jerry, Ramirez, Manson and Starkweather protest and tried to stop him, but he simply tells them they have orders to destroy him causing them to walk off in disgust. Lt. Hedgecock ignores them and orders his team to open fire at RoboCop who then escapes into Parking level 3. Anne Lewis, RoboCop's partner arrives having been alerted by Kaplan and the others of Lt. Hedgecock's treachery, helping him aboard on her police cruiser. During that time Lt. Hedgecock sees Lewis having defied her orders to destroy her former partner, ordering his team to open fire at her causing Lewis to realize that her former friend Lt. Hedgecock is a traitor and she boards on her police cruiser immediately flees from the scene as her SWAT comrades open fire at her. Lt. Hedgecock's actions and attempt to destroy Roboop resulted the Detroit police to go on a strike, putting Detroit into chaos and allowing Clarence Boddicker and his gang to be release from prison.

It is unknown what happened to Lt. Hedgecock, after The Old Man furiously fires Dick Jones for murdering Bob Morton and putting the orders to destroy Robocop to an end and he didn't appeared and mentioned in RoboCop 2 and RoboCop 3 and is no longer leading the SWAT. Due to his rule to follow the orders to destroy Robocop (viewed as a very successful project and property of OCP), which indirectly triggered the police strike and allowing a new organization called Nuke Cult to rise, he is branded as an outcast among on the Detriot Police and a traitor. It is also possible that he was stripped off his position and dismissed from the police service and was arrested in disgrace, after he was sued by Anne Lewis and The Old Man for obeying Dick Jones' orders to destroy Robocop and indirectly triggered the Detriot Police to go on a strike.

Lt. Hedgecock appears in the TV series based on the movie of the same as the secondary antagonist, though he is not always a villain in all his appearances. In this show, he is very jealous and envious of RoboCop and often tries to discredit him. He also seems to have a crush on RoboCop's partner Anne Lewis. In an episode, he made an alliance with Dr. McNamara, the main villain of the show, in order to defeat RoboCop with a giant robot. When RoboCop was being brainwashed by The Scrambler he tried to stop him from destroying OCP and killing the Old Man.

Lt. Hedgecock was a disgrace corrupt SWAT captain of the Detroit Police Force. He was very opposed to RoboCop as shown in the first film, when he arrived to save Mayor Gibson, but lets him distract Ron Miller whom hold him hostage long enough for RoboCop to save him.

However his true nature was revealed that he want to get rid of RoboCop, when he received orders from Dick Jones to destroy him to erase Bob Morton's "mistakes" and lead RoboCop's police force to betray Hedgecock and happily obliges so he become a greatest cop than RoboCop, despite Kaplan and the regular and SWAT Metro West police officers tried to stop him, due to his opposal to RoboCop . However this was ultimately backfired and failed, due to the efforts of Officer Anne Lewis and The Old Man who both very furiously and disgustedly sue him for doing so. 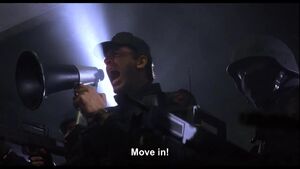 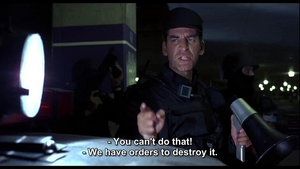 Lt. Hedgecock telling Robocop's comrades that they have their orders to destroy him after revealing his true nature due to his opposal to the latter, but they disgustedly refused. 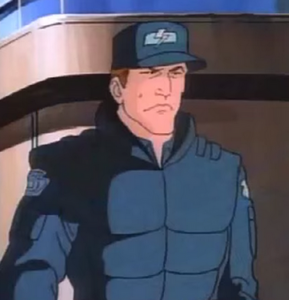 Lt. Hedgecock in the animated series.