Win the game by sacrificing the other survivors (failed).

Luba Gibbs is a supporting antagonist in Saw V, the fifth installment of the Saw franchise.

She is one of Mark Hoffman's test subjects in his game that was a ploy to frame Special Agent Peter Strahm for his crimes. However, Luba was selected for a reason: she took a bribe to cover up and build over an arson incident that killed eight people. She claims to have not killed anyone prior to the game, but her tone of voice, and the other characters' reactions leave it open to interpretation as to whether or not she was lying about this. She kills two people in the game before she herself is killed.

She was portrayed by Meagan Good.

Luba first appears in the game's first trap: The Collars. She meets the other test subjects and suggests that the keys in the jars required to unlock their collars are a trap, do to Jigsaw telling them not to listen to their instincts. She realizes the assailability of her logic when the others tell her that they would not be able to survive otherwise. When the game starts, Luba has some difficulty reaching her key and is almost beheaded twice. However, she reaches her key in time, pulling Ashley back, preventing her from reaching her key. Luba unlocks her collar which indirectly, and accidentally, results in Ashley being decapitated. In the next room, Luba is visibly phased by killing Ashley, but she shakes it off when the next game begins. This time, Charles cheats at the game, stealing Mallick's key to the safety chamber. He tells the others "survival of the fittest" and to "get a clue!" However, Luba becomes tired of Charles' conceited behavior and hits him with her rod, knocking him onto the ground. She smugly responds with her most famous quote: "Survival of the fittest, my ass!" She gives the key back to Mallick and leaves Charles to be gruesomely mutilated by the nail-bombs. Ironically, in the very next room, Luba herself becomes overcome with the "Survival of the fittest" mentality, proving herself to be a complete hypocrite.

When the game begins, they realize that they need a way to get all of the electric wires to feed into the bathtub, Luba attempts to murder Mallick as well, as she hits him with the rod and causes him to fall into the bathtub. However, before she can kill him, Brit stabs her in the neck, killing her. Mallick and Brit use her body to complete the circuit. 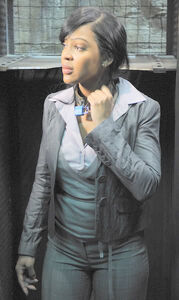 Luba in the Collars. 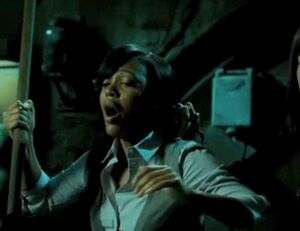