Luca is a supporting antagonist from DreamWorks' 9th full-length animated feature film, Shark Tale. He is a nonsensical and stupid octopus who works for Don Lino as his consigliere. He frequently annoys Don Lino a lot, although he is very demonstrative and loyal to him. He plays the piano and his favorite song is "Baby Got Back" by Sir Mix-A-Lot.

He was voiced by Vincent Pastore who also portrayed Salvatore Bonpensiero in The Sopranos.

Luca first appears when Don Lino and the puffer fish Sykes were having a talk inside the sharks' Headquarters. Lino told Sykes to work for his sons afterwards. Sykes said it's possible with Frankie, but Lenny, he's not so sure. Speechless, Lino sighed, Luca. and asked Luca to play the music record, only the music didn't go to what Lino expected it to go.

Luca later appears during Frankie's funeral, and Lenny's disappearance. Lino, is desperate to find Lenny but Luca points out that the sharks have searched everywhere and assures Lino that Lenny will turn up. Lino wasn't so convinced. When Don Feinberg comes to Lino to discuss something, he farts, causing the orca behind him to faint. Luca inhales in disgust as Lino gets up from his chair and decides talk with Feinberg out the window. Lino then summons Luca to help him find out who the Sharkslayer is.

When Lino is on the phone with Oscar, Luca mistakenly interrupts the call trying to order a pizza with anchovies, meatballs and mushrooms. Lino shouts at him and Luca responds "Oh Hi Boss! What are you doin' workin' on a pizza joint?" Lino yells at Luca to hang up to which Luca whines "but I'm hungry" but hangs up anyway. Later, Luca leads the other mobsharks to Southside to take Oscar down, but Oscar easily scars him off.

The next day, Luca calls Oscar and informs him to look in the filing cabinet to which Oscar finds the pearl necklace he gave Angie the other night. Luca then confirms that the mob has kidnapped Angie to force a sit-down. He threatens Oscar to arrive there or else Angie will be "sleeping with the fishes - the dead ones". Luca then orders Oscar to nod his head if he understands and tell him when he does so. Oscar responds yes and Luca hangs up.

Oscar, Lenny (disguised as a dolphin) and Sykes arrive at the sitdown. Across from them, Luca sits with Lino, Lola and the other sharks revealing Angie bound and gagged, with Lino threatening to eat her if Oscar does not comply. Oscar suddenly begins to laugh hysterically with all the other sharks looking at him. Lenny and Sykes join in with the laughing .Then Luca joins the laughing for no reason, and Lino elbows him hard to shut him up. When Lenny exposes his disguise to Lino, Luca stupidly states "Hey boss, It's Lenny! He was wearing a disguise so we would not recognize him, but now he's not wearing a disguise so we do recognize him!". Luca then watches as Lino chases Oscar out of the sit-down and towards the Whale Wash.

At the end, Luca and the rest of the reformed mob arrive at the Whale Wash. 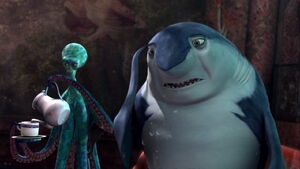 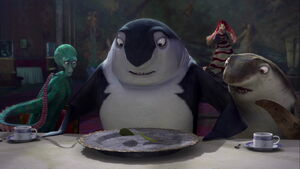 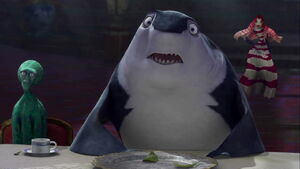 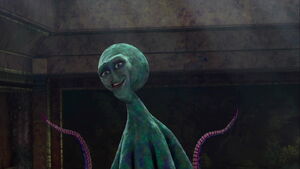