Duke of Serkonos
The Joyful Duke

Exploiting his citizens.
Painting (although badly).

Exploit his country for his own benefit.

Duke Luca Abele is the secondary antagonist in Dishonored 2. He is physically encountered in the eighth mission, The Grand Palace.

He is the Duke of Serkonos, the southernmost island in the Empire of the Isles, and an important ally of Delilah Copperspoon. Together with other conspirators, Luca succeeds in bringing the banished Delilah back from the Void and is also mostly responsible for Delilah's coup in Dunwall. After Delilah has taken over Dunwall, either Corvo Attano or Emily Kaldwin flees to Karnaca where he or she ultimately takes down Luca.

He is voiced by Vincent D'Onofrio, who also portrayed Wilson Fisk in Marvel's Daredevil, Private Gomer Pyle in Full Metal Jacket, Edgar the Bug in Men in Black, Carl Rudolph Stargher in The Cell, Bob Fittler in Chained, , David Hagan in Fire With Fire, Lester Clark in Escape Plan, and Commander Vic Hoskins in Jurassic World.

Luca is the oldest son of Duke Theodanis Abele and his wife Callas. During a visit at Dunwall, Luca ventured through the city with his brother Radanis. When they exited their carriage, they found two young street girls. Luca dared his brother to kill one of them which Radanis did, breaking her skull with a wooden stick. The surviving woman broke an ornamental wooden gazelle off of the carriage and rammed it deep into Radanis' eye, killing him.

During his youth, Luca also met Delilah Copperspoon in Dunwall. He fell in love with her and although Delilah did not return the feelings, the two remained close friends.

Twelve years after Delilah's spirit has been banished to the Void, Luca heard a whisper from the Void which was Delilah contacting him. Together with Breanna Ashworth, who had heard the voice as well, Luca and other conspirators managed to perform a séance which returned Delilah from the Void to the mortal world. After emerging from the Void, Delilah trapped part of her spirit in an effigy which turned her immortal. She entrusted the effigy to Luca who locked it up in his ducal vault.

Two years later, Luca allies himself with Delilah who plans to take over the Empire. When the anniversary of Empress Jessamine Kaldwin's death is celebrated in Dunwall, Luca travels there, accompanied by members of the Grand Serkonan Guard, mechanical Clockwork Soldiers built by Kirin Jindosh, and Delilah herself.

During the festivities, Luca enters Dunwall Tower. He is heralded as a special guest. The clockwork soldiers parade before him, making a spectacle for the onlookers while Delilah is carried inside in a veiled litter. Once the procession has reached the dais where Jessamine's daughter, empress Emily, is sitting, he kneels before her. He then announces that he has brought her the greatest gift of all - family. Delilah then emerges from the litter, revealing herself as the older sister of Jessamine. Delilah and Luca blame Emily and her fother Corvo for the recent murders in Dunwall, in truth perpetrated by their ally called Crown Killer. It is also revealed that Emily's guard captain Ramsey and other corrupt soldiers are in on Delilah's and Luca's coup as well. After Delilah successfully usurped the crown, leaving either Corvo or Emily to flee the city, Luca returns to Serkonos. Unbeknownst to him, either Corvo or Emily has fled to Serkonos as well to unravel the conspiracy and to take down Luca.

If the first option is chosen, Luca will play along but will then run for the alarm. If the second option is chosen, the protagonist will accuse Luca of treason who then replies that the queen he is loyal to will always be Delilah. In both cases, Luca will attack afterwards. He can be eliminated by every weapon or skill at the protagonist's disposal. If he is killed with a sword, a special elimination will take place. The protagonist will block one of Luca's attacks, disarming him and knocking him to the ground. The now defenseless Duke attempts to crawl backwards but the protagonist quickly catches up to him, grabs him and slices his throat. Luca is then thrown to the floor again where he suffocates on his own blood.

Alternatively, the protagonist can also conspire with the body double Armando, allowing Armando to take Luca's place as the Duke of Serkonos without anyone noticing.

To do so, the protagonist must locate both men and must be able to differencitate one from another. This can be done by listening to their conversations, finding letters around the palace or by simply watching - Armando is a smoker whereas Luca is not. Once the protagonist has approached Armando, he or she talks to the double.

Armando can be convinced to take Luca's place as Duke, however, he tells the protagonist that Luca holds a special medaillon which is used by the Grand Guard to ensure they are speaking to the Duke and not the double. The protagonist must steal the medaillon from Luca and must deliver an unconscious Luca to Armando. With the medaillon is his possession, Armando then calls the guards, claiming that the unconscious Luca is the body double and that he has gone mad from impersonating the Duke all the time and now believes to be the Duke. The Guard will then wake up Luca and take him away. Although Luca screams that he is the real Duke and threatens the guards taking him, he is arrested nonetheless and is imprisoned in an insane asylum. 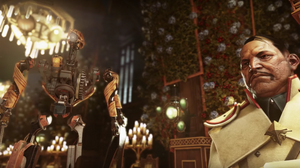 Luca watches as the coup against Emily goes through. 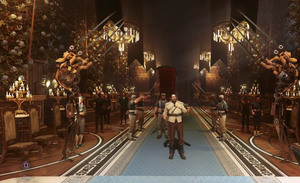 Abele arrives at the anniversary ceremony. 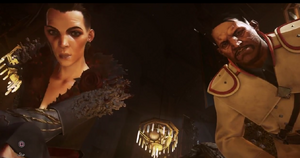 Abele and Delilah look at a fallen Emily. 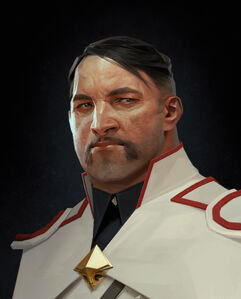 The Royal painting of Luca Abele. 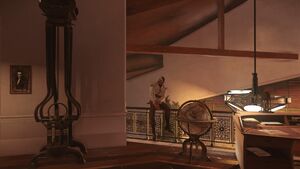 Luca in the Grand Palace. 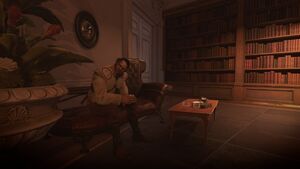 Retrieved from "https://villains.fandom.com/wiki/Luca_Abele?oldid=4329002"
Community content is available under CC-BY-SA unless otherwise noted.