The True Face of Evil (self-proclaimed)

Commander of the Highland Army
Leader of the White Wolves Army

Burning down the villages to the ground.
Taking immense glee in making the scared people acting like a pigs and slaughtering them.

Spread destruction upon the City-States of Jowston as well as eventually humanity and the entire world (partly succeeded; later failed when Riou defeats him in one-on-one duel).

Get revenge on, kill and overthrow his own father Agares Blight for his mother raped by the Muse thugs (briefly succeeded).
Kill Riou and his friends (failed).

Luca Blight is the main antagonist of Suikoden II. He is the highly insane Prince of Highland, unmatched in battle, cruel and ruthless, harboring very great hatred toward the City States of Jowston and eventually humanity in general.

Luca is a cruel, sadistic, deranged, vicious, abusive, psychopathic and outright murderous person with utterly no redeeming or sympathetic qualities. He is domineering and tyrannical to the Highland Kingdom by gaining control over the military power of the Highland Army. In this regard, Luca can be described as a "berserker" type of character. He quenches his bloodlust, as seen when he fatally kills the scared woman, after he lets her act like a pig when he burned the village in Ryube.

He is also shown to be traitorous, depraved, selfish and dishonest when he betrays Agares Blight, during his father's assassination with Jowy by poison as part of his revenge for fearfully leaving him and his mother during the attack in Jowston. He has a close attachment to Jillia, due to the resemblance of his mother, Sara. He is unaware of her plans of having him killed, along with her own father.

In Genso Suikogaiden Vol. 1, Luca maintains his treacherous, narcissistic and oppressive personality during Jowy's scenario in Chapter 2. He shows his dislike for Jillia when he has a personal conversation with Jowy Atreides, where he interrogates him. Jowy then volunteers to serve as a spy to gain Luca's trust.

Luca Blight was born into the Highland Royal Family from Agares and Sara Blight. While he had been born normal, one event would change the Prince forever. While on an entourage, the Highland royal family's carriage was ambushed by ruffians. Agares fled in terror, leaving Luca and Sara captured by the delinquent ruffians. Luca would witness Sara repeatedly raped and he is unable to help. They managed to escape, but Sara eventually died giving birth to Luca's sister Jillia, from the rape. Even so, Luca, even in his eventual madness, would usually treat Jillia in a somewhat better discourse due to her resemblance to his mother.

While visiting the town of Kyaro, Luca confirmed that the ruffians were hired by the town of Muse from the Jowston City-States. Hearing this, compounded with hearing that his father cowardly fleeing without even sending help, Luca began to hate the City-States of Jowston and his father.

Eventually, Jowston and Highland signed a ceasefire, and Luca was given control of the Highland Army by Agares. Instead, Luca used his authority to eventually instigate a war between Highland and Jowston, first by having his own men dress up as Jowston army and raided the Unicorn Brigade encampent, made of Highland youths. The massacre, according to Luca, would be enough to inspire the Highland people to re-ignite the war, pinning the blame on the City-States.

Shortly after the massacre of the Brigade, Luca went to personally raid small villages near the Eastern Highland borders, murdering everyone there and took over the Mercenary Fort under Viktor, claiming complete control on the Eastern City States with his unstoppable White Wolf Army. The City-States leaders gathered to discuss how to defeat Luca, but due to mistrust between each leaders and Luca already sending Jowy Atreides whom he captured earlier as a spy and eventually assassinated Muse's Lady Annabelle, the Highland managed to capture Muse.

As Luca started his military campaign, he presents himself to be a ruthless and feared leader as well. Solon Jhee, a general who had a remarkable success in the past, is executed for one failure in the battle to take the North Window Castle. However, Luca is able to garner more successes thanks to re-employing Jowy to his ranks.

After taking over Greenhill, Luca gathered up many innocent Muse civilians in order to be sacrificed to the Highland's Beast Rune. There were some civilians managing to flee to the Matilda Knightdom. Luca managed to catch up to them thanks to the Knightdom not sending help to the civilians. As the civilians were sacrificed, Luca only laughed in maniacal delight, at this point it becomes apparent that Luca not only hates the City-States and his father, but also the whole humanity, his hatred increased tenfold by the power of Beast Rune.

After sending General Kiba for a campaign to South Window and also recruiting Leon Silverberg as Jowy's strategist, Luca arranged Jowy's marriage with his sister Jillia per his reward for taking Greenhill. To do that, he accompanied Agares giving his blessings to Jowy to become Highland's royal knight and had him swear an oath using Jowy's blood put into a wine. However, Luca had Jowy's blood poisoned, so when Agares drank the wine, the poison took effect and he slowly died. Luca used his father's death to gloat on how he waited this moment to exact vengeance on his father's cowardice and that this was just the beginning, his next goal is to eradicate the planet from humanity. On Agares' death, Luca is crowned as the King of Highland, but this news didn't sit well on the defeated Kiba and the general instead defects to the Dunan Unification Army.

Luca later employs the help of Harmonian general Sasarai and a mysterious black knight formerly under the service of Windy; Yuber, in order to eradicate the Dunan Unification Army. With those help and despite Sasarai fleeing early, the White Wolves Army is seemingly invincible and is marching to the Dunan Castle at North Window. However, unknown to Luca, Jowy has been plotting with Leon to destroy Luca from the inside. Informing the Dunan Army of his raid to the Castle, the Dunan strategist Shu concocted a plan to counter Luca's raid. The plan consists of emptying the castle, and eventually ambushing Luca and his guards in the night, followed by an attack of eighteen of the Dunan Army's best warriors, including its leader Riou and two of its chief generals Flik and Viktor.

Despite the well-thought plan, Luca gleefully proved to be extremely tenacious and hard to kill. Even after being defeated by the eighteen warriors and rained by tons of arrows, Luca still found enough strength to launch one final attack to Riou, but he was eventually defeated for good. In his dying breath, admitting his defeat, Luca boasts that it took hundreds to kill him, but he killed humans by the thousands, and without regrets, claims that he is the true face of evil before dying for good.

However, even after dying, Luca has claimed that Riou will not have peace, the Highland Army will be demanding vengeance for their loss of the Royal Family member. True to his words, Jowy, now King of Highland, continues the war, claiming that it is for Highland's honor, while in truth, he is maintaining the Beast Rune that grew too powerful thanks to the hatred and sacrifice made by Luca. In the end, the Rune is calmed down with the power of Riou's Bright Shield Rune, and Highland admits defeat for good, with Luca's influence eventually put to an end. 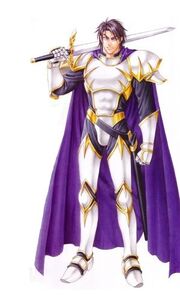 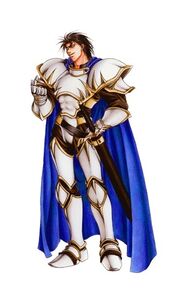 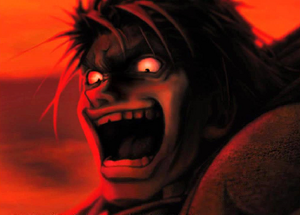 Retrieved from "https://villains.fandom.com/wiki/Luca_Blight?oldid=3897472"
Community content is available under CC-BY-SA unless otherwise noted.