Capo of the Clemente family

Luca Gurino is a supporting antagonist in Mafia II serving as the secondary antagonist for the first half of the game. Luca was a caporegime for the Clemente Crime Family.

He was voiced by André Sogliuzzo, who also played Carlo Falcone in the same game, and Juan Strickler in Grand Theft Auto Online.

In February 1945, Luca assigns one of his soldatos Henry Tomasino to sort out a problem involving a jewellery store which owes Clemente money. Tomasino gave the job to two of his associates Vito Scaletta and Joe Barbaro. The two manage to pull the job successfully though they have a run in with the Irish Gang.

A couple days later, Luca was introduced to Vito and Joe, and offered them a chance to prove themselves by killing Sidney Pen a former associate of the family who had since fallen out of favour with Clemente. Luca promised them that if it went smoothly they would be Made into the family as long as they pay the initiation fee of $5000 first. Luca leaves the scene only to get intercepted by Clemente who slaps him, and orders him to come with him as they have some business to discuss.

Though the trio succeed in killing Pen, Vito's earlier robbery of some gas stamps gets him thrown in prison. Clemente and Luca provide him with the best lawyer in town, but even he is unable to get Vito out of trouble as he was only really there to make sure that Vito didn't rat. After Vito's trial, Joe confronts Luca over this, and this angers Luca so much that he orders a hit on Joe. Thanks to Henry telling him beforehand Joe is able to leave town before Luca's assassins show up at his apartment.

Five years later in 1950, Joe returns to Empire Bay to join up with the Falcone Family. He gets into Carlo Falcone's good books who agrees to have Luca call off the hit.

Another year passes, and Clemente begins to muscle in on Falcone's drug operations. Clemente had Luca kidnap three of Falcone's men including his accountant Harvey Beans. Luca took the trio to Clemente's Slaughterhouse where they were interrogated. One of them Frankie the Mic is killed by Luca in an attempt to intimidate the others for information.

At that point, Vito who was recently released from prison arrived on the scene having joined up with Falcone as well. Luca orders his enforcer Sammy to kill Vito, but he ends up getting killed himself. Luca leaves Vito in the care of his men, and Vito along with Tony Balls are able to kill all of them. Luca hides in a back room, and a large group of Clemente soldiers arrive to kill Vito and Balls, but all die in the process.

Vito and Balls break the door down, and Balls beats the snot out of Luca before torturing him with a cattle prod, and then putting him through the meat grinder with Beans helping him. 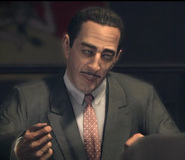 Luca having dinner with Henry Tomasino
Add a photo to this gallery
Retrieved from "https://villains.fandom.com/wiki/Luca_Gurino?oldid=4258630"
Community content is available under CC-BY-SA unless otherwise noted.