Soldier of the Viltrum Empire

Spending time with his family

Save his people from extinction by producing offspring with women on Earth.

Lucan is a minor antagonist turned supporting character in the Image Comics series Invincible. He is a member of the Viltrumite race, a humanoid species of extraterrestrial origin who possess superhuman strength, super speed, virtual immortality, and flight. As is customary for male Viltrumites, Lucan sports a large mustache.

Lucan is a relatively handsome, bald Black man. He stands a few inches taller in height than Omni-Man and is decidedly heavier. He is built like a brick-house, with layer upon layer of thick and bulky muscle covering his massive frame.

Lucan’s Viltrumite attire is typical of an average Viltrumite soldier. It is a form fitting white body stocking with grey accents. A large semi-circular swath of grey surrounds the neck of his uniform, and a thin strip of grey runs down the centre of its chest.

The lower torso of the uniform is completely covered by a simple grey loin cloth, and the feet are made up of sturdy grey boots.

Lucan embraced the typical Viltrumite ideals for the majority of his life. Loyalty to the Viltrumite Empire, strength, combat and glory in battle were all that mattered to him and were the only means with which he knew how to define his own sense of self worth.

It was for this specific reason that he was utterly stunned and shocked by Nolan’s actions on Thraxxa and moreover, his fathering and protection of his imperfect son (Oliver).

Upon his acclimatization to life upon the planet Earth though, Lucan may have been the one Viltrumite that had the most in common with Nolan. Unlike his fellow Viltrumites, Lucan has met and fallen deeply in love with a human woman, becoming a loving husband and father.

Lucan desperately wants to maintain her happiness and has gone as far as to refuse the commands of the former Grand Regent Thragg to mate with other women.

Lucan was one of three warriors of Viltrumite who appeared in the skies above Thraxa when Omni-Man first attempted to flee the Viltrumite Empire. Lucan and his allies destroyed the people of Thraxa, causing their kind of near extinction before Omni-man came out of hiding and met them in the skies above the capital.

While Omni-Man was fighting his mates, Lucan accidentally followed Nolan's son, Invincible, to a mass of dark caves which he had hoped would hide from his location.

Lucan challenged Invincible in the woods, but when he found Nolan's other offspring within them, he was shocked into quietness. His shock lasted long enough for Invincible to trick him and escape from the caves.

Angry at his own dumbness, Lucan pursued Invincible in a blaze of motion. He'd almost seen him in Thraxa's open skies. When he closed between them the last few inches, Nolan crashed into the small of his back and drove him down into the ground.

During Viltrumite War Lucan was next seen. He was one of the three Viltrumites that were sent when they first entered Viltrumite space to confront the Grayson family. Lucan ended up fighting both Omni-man and his son Oliver, while Conquest struck a standstill against Invincible.

Lucan did everything he could to defeat the two. But in the end he let them escape to turn his attention to their other allies.

Lucan also took part in the final battle over Viltrum, during the war. He was one of the many Viltrumites who ended up so severely wounding Allen the Alien that he was forced to quit the fight.

At the end of the battle, Lucan joined the remaining Viltrumites in colonizing the Earth. He was given strict orders for impregnating as many human women as possible in efforts to improve the flagging numbers of the Viltrumites. But instead Lucan decided to remain tragic to one of the human beings with whom he fell in love.

He was waiting for retribution for his direct defiance of Thragg's orders when it was discovered that Nolan was the Viltrumite Empire's true ruler. He (with General Kregg, Anissa, and Thula) stopped Thragg from assassinating Nolan outright. They nearly beat him to death until he was forced to be allowed to live by Nolan.

Lucan is at least outwardly loyal to Nolan at this time, serving him as loyally as Thragg did before him.

Viltrumite Physiology: Lucan's Viltrumite physiology grants her incredible strength, speed and stamina. He's able to fly, age slower than mortals, brush off attacks, heal almost instantly, and utilize her endurance for long periods of time. Being a member of her people's empire, Lucan is a brutal hand-to-hand fighter and warrior. 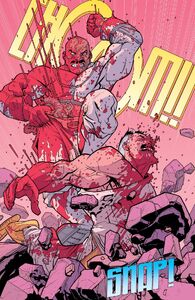 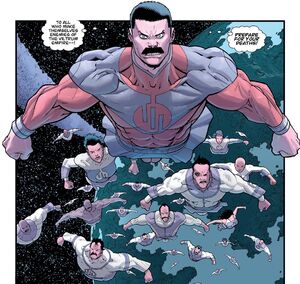 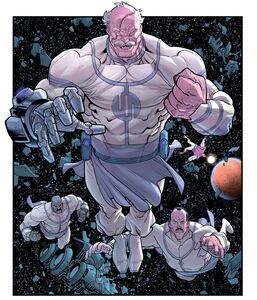 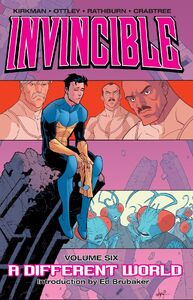