Member of the Baker Family (formerly)

Member of the Connections

Take Eveline's Mold for himself.
Kill Ethan Winters and Chris Redfield (all failed).

Lucas Baker is a major antagonist in the 2017 video game Resident Evil 7, and the main antagonist in the DLCs 21 and Not a Hero. He is the twisted son of Jack and Marguerite Baker, older brother of Zoe Baker and nephew of Joe Baker who is considered a "black sheep" and the "bad seed". After he and his entire family were infected by the bioweapon entity Eveline, and his parents were brainwashed by her and turned into molded, Lucas would go on to use his technical expertise to build elaborate death traps he would use on some of his parent's victims.

He was voiced by Jesse Pimentel in the English dubbed version, and by Setsuji Sato in the Japanese dubbed version. Pimentel would go on to voice Salvatore Moreau in the sequel, Resident Evil Village.

Lucas was a creative boy from an early age on. He won several awards for machines and inventions he built during school. His interest for engineering and inventing were encouraged by his parents, it is revealed that his mother gave him a jigsaw puzzle.

In contrast to his parents and his sister Zoe, Lucas was already mentally unstable long before the arrival of Eveline in their home. He was widely seen as a "bad seed" and in his youth, trapped his childhood bully Oliver on the attic of the Baker farmhouse by sealing the exit with a remote control he build himself. To prevent Zoe from finding the remote he built it into one of his trophies and disguised the trophy as a lamp. Trapped at the attic, Oliver starved to death. Although his parents never found out about Oliver's death, it is implied that they might have guessed that something was wrong with Lucas because they brought him to a hospital to get a head scan.

Jack and Marguerite took Eveline and Mia in but were swiftly turned insane by Eveline. When Zoe, who was not affected by that time, was alarmed by Eveline's behavior, she went downstairs but only found her brother lying on the floor unconscious.

Eventually, Lucas was turned by Eveline's powers as well and became one of the molded. This gained him extreme regenerative abilities but also turned him even more insane. However, Lucas did not lose his wits and went on to built elaborate death traps in a building seperated from the main Baker house. Lucas also rigged several wired explosives all over the place, some tarned as wooden crates. When Jack and Marguerite were ordered to kidnap several people by Eveline, who wanted to extend her new "family", Lucas put some of the unlucky victims inside his death rooms. However, even when the subject solves the puzzles, the rooms resulted in their deaths nonetheless as Lucas specifically built the rooms to kill the subjects.

When three investigative journalists came to check the abandoned Baker farmhouse, they were captured. The cameraman, Clancy, was given to Lucas who put him into his "Happy Birthday" riddle room. Although Clancy started to solve the room, several injuries were inflicted to him, including a balloon filled with sharp objects which tore into Clancy's skin when he tried to inflate it and a password to a door being driven into his arm with a quill. Eventually, Clancy managed to solve the room but solving the riddle also caused an explosion that ignited a burnable fluid on the floor of the room. Clancy burned to death and Lucas retrieved his body, which had been equipped with a camera filming the entire ordeal.

Prior to placing Clancy in his "Happy birthday" room, Lucas forced Clancy to play a game of Blackjack with another captive by the name of Hoffman where the loser would have their fingers cut off, be electrocuted, and eventually be cut apart by a saw blade. Clancy eventually won, but Lucas decided that he wished to continue to torment him, leading to him being forced to play another one of Lucas's games which would lead to his death.

Eventually, Lucas was contacted by the mysterious organization who were behind the creation of Eveline. They provided Lucas with a serum which freed him from Eveline's control yet allowed him to keep his regenerative abilities. In turn, Lucas kept in touch with the organization and spied on his family for them. Lucas also built a secret hideout and basecamp in a nearby salt mine, from which he maintained contact with the organization.

In 2017, Mia and Eveline are still part of the Baker household and the Bakers minus Lucas are still under Eveline's control. Eventually, Mia's husband, Ethan comes to investigate and is captured by Jack. He is knocked unconscious and brought to the main house where the Bakers have prepared an initiation dinner for him. When the tied up Ethan refuses to eat, Lucas throws his plate at Ethan. Jack, who is annoyed with his son's disrespectful behavior, cuts off Lucas' arm as punishment which the latter accepts with only feeble resistance. When the dinner is disturbed because of a policeman at the main entrance of the house, Lucas and Jack leave the table to deal with him.

Much later, Lucas foils an attempt of Ethan to rejoin Mia. Lucas captures Mia and brings him to the barn where his death traps are built. While Ethan ventures through the house and evaded Jack and Marguerite, Lucas plants two key cards around the premises, one inside the body of the now deceased policeman. When Zoe contacts Jack, intending to help him in finding a counter-serum for Eveline's influence, Lucas captures Zoe and one of the ingredients needed for the serum. Lucas then calls Ethan, telling him to come join him if he wants the ingredient.

Eventually, Ethan finds the key cards and enters the barn, carefully avoiding Lucas' explosives. Further venturing into Lucas' realm, Ethan arrives in a part of the barn that is refashioned into a fighting pit. Ethan is forced to kill several molded, including one grotesquely bloated one. Eventually, Ethan arrives at a locked door for which a code is needed. Lucas approaches from the other side of the door, giving Ethan three possible codes to open the door. However, all codes are false and activate another trap instead, a sharp projectile which swings across the room and kills Ethan if he remains on the spot. After Ethan has dodged the projectile, he heads further through the barn to find the code. On his way, he finds the corpse of Clancy and the video tape depicting his gruesome death. He also sees a video message left for him by Lucas, in which Lucas claims that he does not want to be healed from Eveline's powers and that he will not hand over the ingredient willingly.

On Clancy's body, Ethan finds the code for the door and uses it to open the door. However, once inside the room he realizes that he is inside the same "Happy Birthday" test Clancy died in. At the same moment, Lucas locks the door from behind. Ethan starts to solve the riddle to free himself but because he has watched the video tape, he can simply dodge the harmful traps and solve the riddle without spilling the burning fluid. After the cake has exploded an angry Lucas, who until now has monitored Ethan's progress from a safe location and has commented on it via loudspeakers, realizes that his trap has not worked. Angrily screaming that Ethan should be dead, Lucas drops a pile of dynamite into the room but Ethan uses it to destroy the wall between the trap and Lucas' hideout. Realizing that Ethan is close, Lucas hastily flees from the room but forgets to take the ingredient with him. When Ethan arrives in the control room, Lucas is already gone.

After contacting his father and telling him that Ethan is on his way to the boat house, where Lucas kept Mia and Zoe, Lucas flees the farmhouse and heads to his makeshift basecamp in the salt mines. Ethan later listens to a broadcast between Agent Redfield and another soldier who talk about Lucas and that he is in the mines. Redfield claims that he will look for Lucas.

Redfield and his men follow Lucas Baker into the salt mines. Though Lucas succeeds in killing Chris's men, he fails to kill Chris himself, and is ultimately slain by him.

Out of all the villains in Resident Evil 7, Lucas Baker is the only one who is truly evil. Prior to infection Lucas's personality was somewhat childlike, as he was shown to be extremely detestable, sullen, and overall unpleasant towards his family and their guests, often preferring to be on his phone instead. He also became known for being a bad seed and (as revealed through his diary) mentally troubled as he locked a boy in his attic to die of thirst and starvation for teasing him.

Despite this, he went on to be a gifted inventor and won many awards. He would later show intense pride of his accomplishments as he went out of his way to protect his trophies and privacy from his sister and was so possessive of his childhood room that he attempted to deny a shipwrecked girl to it.

After he became infected, Lucas begins to utterly revel in the regenerative abilities granted by Eveline, going as far to mutilate himself on camera before Ethan to demonstrate how little he wanted to "turn back the clock". However, his intelligence, inventive abilities, and several emails reveal that Lucas is actually cured of Eveline's control but he only uses this as an excuse to keep her gift.

This shows that his sadistic personality is genuine as it comes, as unlike his family who, even though they are brutal and treacherous murderers in their own regard at least kill in a very quick and straightforward manner, Lucas chooses to torture his victims before killing them, promising his victims freedom in his death traps if they play his games, but clearly enjoys watching them suffer too much to let them earn their escape as seen with Hoffman and Clancy. His childishness is shown by the ways he's prone to having immature temper tantrums when his cheating falls through as he was clearly shocked when Clancy won during his unbeatable card game and literally seethed with rage when Ethan did not burn to death in his trap like Clancy before him.

Unlike the rest of the Bakers, even pre-infection, Lucas has shown little love to the members of his family. His hidden note in the attic reveals that he curses his family behind their backs for their constant scolding of him through his "F***-You List" that including incidents like Jack slapped him for using the smartphone during dinner, he is got scolded by his mother for commenting for her cooking; Zoe called him a pervert for looking at her during yoga or Jack threw all his stuffs in the red box on the veranda. He shows little remorse over Marguerite's death (something that even Jack did in his mutated form) and (like the rest of the Bakers) hates Zoe because she was not infected like the rest of them (although his attitude before shows they had some form of sibling rivalry or relationship strain and becoming infected pushed this to murderous degrees). It is unknown of his relationship between him and his uncle Joe. 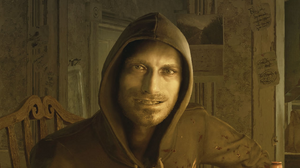 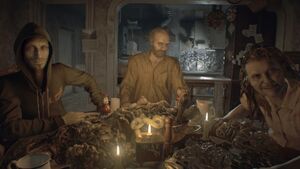 Lucas with Jack and Marguerite in the infamous dinner scene. 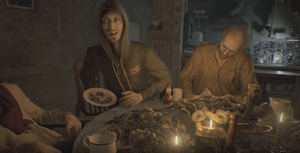 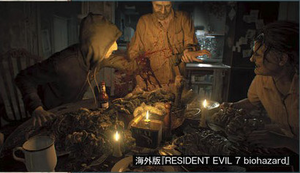 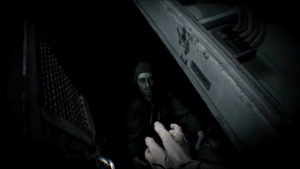 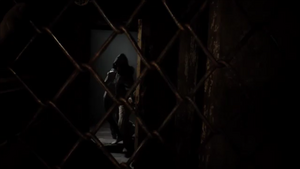 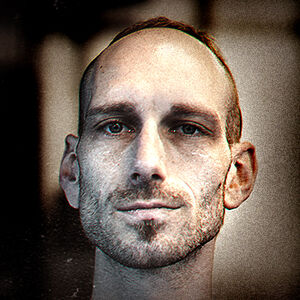 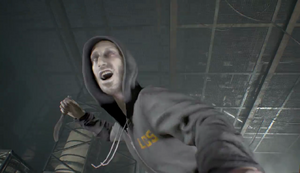 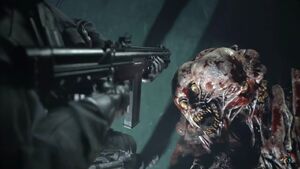 A mutated Lucas, moments before his death. 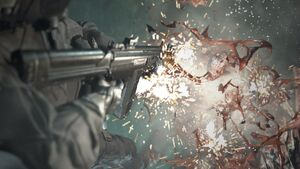 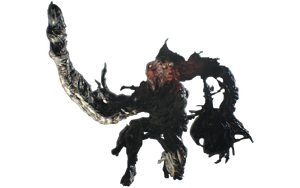 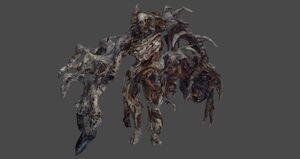