Leader of the Private Militia

Lucas Grey, also known as the Shadow Client and Subject 6, is the tritagonist of the "World of Assassination" trilogy in the Hitman series. He is one of the clone assassins created by Dr. Otto Wolfgang Ort-Meyer just like Agent 47, who is his best friend.

After escaping from Dr. Ort-Meyer, Lucas Grey started his private militia and manipulated ICA to eliminate Providence, the true organization behind Dr. Ort-Meyer and his project. Upon reawakening 47's memory and revealing his true identity, Lucas worked with 47 and intended to bring down Providence.

He is voiced by John Hopkins.

Like Agent 47, along with Agent 17 and the No. 48s, Subject 6 is a genetically engineered clone created by Dr. Otto Wolfgang Ort-Meyer, with enhanced natural attributes, and was raised in harsh conditions. One day, he and 47 managed to escape from the place they grew up, and found themselves at a small farm in a snowy region, where they were took in by an unnamed woman.

However, the next morning, they woke up to gunshots when their "warden" had found them, slaughtered everybody they had been in contact with, and Subject 6 and his friend were forced to watch the woman get killed. Subject 6 managed to fake his death unintentionally during the raid at the farm and escaped successfully. However, 47 was recaptured and had his mind wiped by Dr. Ort-Meyer to avoid him from discovering the existence of Providence, something which haunted 6 for life. 6 then spent his lifetime running away from Providence, eventually adopting the alias, Lucas Grey.

After 1989, Grey became a mercenary and participated in conflicts in places such as Chechnya and Sierra Leone. Years later, he used his enhanced abilities and skills to become a head of security for a banker named Eugene Cobb. For many years, Grey had been tracking Agent 47 down; knowing about his existence and his M.O, he was able to link together several deaths that were either unsolved or were found to have been accidents.

Nevertheless, after he discovered that Eugene Cobb was a Providence operative, Grey realized that he cannot run forever and decided to wage a war against Providence in an act of vengeance against all they have done. After killing Cobb, Grey eventually adopted the alias of the Shadow Client and raised a private militia from outlaw rebels like Sean Rose and pirates like the Maelstrom, in order to start his war against Providence operatives and eventually their leader, the Partners.

Grey made his first appearance by approaching Russian billionaire and fashion mogul, Viktor Novikov, primed with prior knowledge of both the FSB's investigation into Novikov and the IAGO spy ring. After having disposed of the FSB agent, Nicholai Kamarov, Grey met with Novikov again to collect his reward. In return, Novikov handed him everything that IAGO had collected about the "global elite", and they departed.

As Novikov was leaving, Grey texted an unknown associate, probably Olivia Hall, to start leaking Novikov and Dalia Margolis' names to tie up loose ends. Grey told Novikov that he has a feeling that this was going to be the show Novikov would be remembered for, insinuating that Grey knew an impending assassination was going to happen. Later, 47 had assassinated Novikov and Margolis to prevent leakage of NOC lists of British undercovers on IAGO's auction, a contract that was made by Grey himself.

Later, Grey leaked information regarding an Ether-sponsored weaponized virus to one of the company's shareholders, who in turn asked the ICA to eliminate its two researchers, Silvio Caruso and Francesca De Santis, in addition to destroying the virus on ethical grounds, at a secret facility in Sapienza, Italy.

One week after 47 eliminated Caruso and De Santis, Grey discovered the trace of Hajun, a "Herald" of Providence sent to investigate the incident, and tracked him down to Ether's headquarters in Johannesburg, where he ambushed him by hiding in the backseat of his car, keeping him at gunpoint from behind. After a brief discussion, Grey asked the businessman to hand him "the key." After Hajun reluctantly gave it to Grey, he informed that Providence would hunt Grey down and kill him him. Grey only replied that they were even then before killing Hajun.

After killing Hajun, Grey leaked information regarding General Reza Zaydan's impending coup in Morocco to construction conglomerate Hamilton-Lowe, who in turn asked the ICA to eliminate two key members of the coup, Zaydan and Swedish banker Claus Hugo Strandberg, to protect their contracts in the country. Whilst 47 went to Marrakesh, Morocco to assassinate the duo, Grey used the keys obtained from Cobb and Hajun and broke into a bank vault in New York, before obtaining information on all Providence assets and operatives there.

After 47 assassinate indie singer Jordan Cross and his lawyer, Ken Morgan, Grey had his private militia abducted Jordan's father, Thomas Cross, who was a reclusive media mogul and Providence operative, while the latter was attending his son's funeral. Grey killed Thomas Cross in order for hackers to loot his accounts. Grey's actions against Thomas Cross immediately drew Diana's attention, who deduced the Shadow Client was behind every events and main contracts 47 had received, from Novikov to Jordan Cross.

Under Diana's advice, ICA and Erich Soders sent 47 to the militia's compound in Colorado, and assassinated four significant mercenaries working for Grey. Deep inside in the private militia training site, they discovered Grey's the tornado shelter within its basement, filled with maps and collections of photos regarding all Providence operatives (including the aforementioned Thomas Cross and Arthur Edwards, the current Constant of Providence). It also included the photos of some previous targets assassinated by 47, including Alvaro D'Alvade, Masahiro Hayamoto, Winston Beldingford and Alistair Beldingford, meaning that the Shadow Client had been focusing on 47 for quite a long time.

Most importantly, however, 47 and Diana discovered evidence that Soders had betrayed ICA and became a Providence agent. Begrudgingly, Diana then decided to take down Soders first before they could continue to deal with the Shadow Client. Afterwards, Grey watched 47 exit the compound through the scope of a sniper rifle from a nearby hill.

Grey soon contacted Olivia Hall who, wacked with guilt, rightly assumed the ICA found the camp by tracing her, but Grey reassures her that she did well, and they shouldn't speak again until the heat dies down. As she feared for her life, Grey further comforted her by explaining his past to her. As he attempted to pull the trigger to kill 47, the latter glanced back towards Grey's position, apparently sensing his presence. Grey then took his finger off the trigger and let 47 go free, claiming that he (Grey) knew him (47) "better than anyone."

Grey eventually left the compound for India, where he'd meet with Wazir Kale, the infamous Indian pirate known as the Maelstrom, on Maya Parvati's recommendation before her death. Grey explained his agenda to the Maelstrom and recruited him for the cause.

After the assassination of Alma Reynard, a Militia member and Sean Rose's wife, Agent 47 assassinate Robert Knox and Sierra Knox, who defected from Providence, under Providence operatives' request. Meanwhile, after arriving in Berlin, Grey contacted Olivia Hall, who was in an abandoned asylum within Romania. Olivia expressed her worry that 47 now worked for Providence and was coming for Grey, but Grey assured that 47 will and need to remember their friendship.

Later, Grey managed to persuade Rico Delgado, the then leader of Delgado Drug Cartel, to join his cause in exchange of the man who murdered Rico's uncle and cousin. Then, Grey inflitrated Ether with Olivia's help, kidnapping its chief biochemist Oscar Wong and leaving him to be interrogated by Rico about Ether's facility.

After Rico's assassination at 47's hands (just like his uncle and cousin did), Grey and his militia storm Ether’s headquarters in Johannesburg, Germany, to steal a device. He also took Ether CEO Neleis De Waal hostage and recorded a hostage tape outing the existence of Providence to the world. After that, Grey and his men left the facility before it was blew up by his time bomb, taking Neleis De Waal with it.

Following the Maelstrom's assassination, Grey stayed in the Romanian asylum and waited for 47's arrival. Grey managed to revealed his true identity and their shared past to 47, before convincing him to work together to fulfill their long-lost goal: Destroy Providence. Afterwards, Grey restored 47's memory and persuaded Diana to work with him, disbanding the Private Militia in the process. After 47's memory had been restored, he remembered the person whom Ort-Meyer answered for, who punished him during his escape attempt; Janus, the retired first Constant of Providence.

After arriving at Whittleton Creek, where Janus had been residing, Grey instructed 47 to eliminate him and his bodyguard leader, Providence Herald Nolan Cassidy, before acquring vital information they needed to locate the current Constant, Arthur Edwards. Soon, Diana and Grey had a discussion over the deaths of Diana's parents, who were killed by an unknown assassin (later revealed to be 47 himself) sent by Blue Seed Pharmaceuticals, which was also affiliated with Providence. Grey revealed that he was one of the people involved in this hit and apologized to Diana, which made her surprised and wondered.

Afterwards, 47 infiltrated the Ark Society's annual fair on the Island of Sagil with Grey's assistance, as they were preparing for Janus' funeral. He assassinated their newly appointed chairwomen Zoe Washington and Sophia Washington, who had the kill switch for toxin inserted in the Constant's body, before he abducted the Constant from the island.

In his imprisonment, the Constant betrayed the Partnes and revealed the three families that led Providence, whilst the Partners faked their deaths and went on hiding, but the Constant revealed their their accounts at the Milton-Fitzpatrick Bank would still be intact. Grey and 47 then went to New York towards their destination, the New York branch of Milton-Fitzpatrick Bank, where Grey once worked for. Grey sent 47 there to access to the datas and eliminate its manager, Athena Savalas, who was also a Providence Herald, before leaving.

With the data acquired from the Milton-Fitzpatrick bank, Olivia discovered that the Partners paid transactions to HAVEN; a corporation based in the Maldives which presented itself as a reputation management service, but secretly created new identities for wealthy criminals. In order for Olivia to successfully breach HAVEN servers, 47 managed to inflitrate the HAVEN Island's HQ as a potential client and eliminated the resort's trio of owners, Tyson Williams, Steven Bradley and Ljudmila Vetrova.

Nevertheless, once Olivia had access to HAVEN's files on the Partners, she discovered that the Partners' controlling business shares have not been allocated to their new identities, but rather to the Constant himself, who already escaped. Later, Olivia sent informations to Grey, who concealed the fact that the Constant had escaped and told 47 everything was going as planned. As they watched the upcoming storm, 47 and Grey vowed to take the entire Providence down as they make their next moves.

Grey and 47 travel through Saudi Arabia to UAE, Grey looking hopefully to the future. Upon parachuting onto the Burj Al-Ghazali, they are almost struck by the propellers of a helicopter carrying Alexa Christine Carlisle. 47 lands on the building, climbs up and Grey oversees him as he assassinates Carl Ingram and Marcus Stuyvesant.

The two brothers discuss their future after they reach Dartmoor, where 47 assassinates Carlisle. However, Grey is then cornered by CICADA operatives. Unwilling to be taken in, Grey snatches a pistol and shoots himself in the head, killing himself.

47 later hallucinates Grey while drugged. Grey assures him that Diana had not betrayed him and encourages him to wake up. This is his last appearance.

The Shadow Client watching Agent 47 from his sniper rifle. 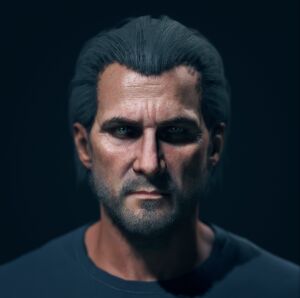 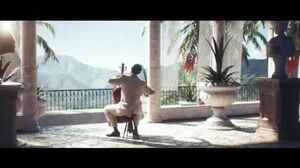 HITMAN - 'Legacy' Opening Cinematic
Add a photo to this gallery

Retrieved from "https://villains.fandom.com/wiki/Lucas_Grey?oldid=4216120"
Community content is available under CC-BY-SA unless otherwise noted.