Member of the League of Evil Exes
Professional skateboarder

Lucas Lee is a major antagonist in the graphic novel Scott Pilgrim and its 2010 film adaptation/video game Scott Pilgrim vs. the World. He is the second member of the League of Evil Exes and Ramona's second ex-boyfriend.

In the 2010 film adaptation, he was portrayed by Chris Evans, who also played Bryce Langley in Fierce People, Robert Pronge in The Iceman, Ransom Drysdale in Knives Out and Lloyd Hansen in The Gray Man.

Lucas was the second ex-boyfriend of Ramona. According to her, during her school time, he was only a geeky kid who always followed her during drama class (or math, she only remembers it had too much drama). Sometime after school, he learned how to skate and became cool, causing Ramona to date him for a short while until another boy came around (her third ex, Todd Ingram). He was later contacted in the internet by Gideon Gordon Graves, calling him to be a member of the League of Evil Exes. Lucas fought the titular character, Scott Pilgrim, during one of his rehearsals. He attacked him using his skating and other tactics, but was defeated when Scott challenged him into doing a grind on a very dangerous rail, resulting in his defeat when he reached the bottom at full speed and crashed. He left behind some coins and a mithril skateboard, which Scott couldn't use due to lacking "Skateboard Proficiency."

In the film, Lucas is an A-list movie star and more arrogant and cruel. Many of his movie posters can be seen throughout the movie itself, right before he appears in the flesh (to the tune of the Universal Studios theme). Unlike the books, he has a whole group of stunt doubles to fight for him, all wearing similar coats and jeans, carrying the same skateboard models as Lucas himself. Scott defeats them all, however, and follows the book's plot by challenging Lucas into doing a grind on a dangerous rail. He dies when he reaches a total speed of 309kph (192 mph) on the rails and crashes at the bottom, leaving behind 2000 points and some coins. Scott is not happy, though, as he failed to get Lucas' autograph.

After his defeat in all adaptions, he respawns back at his home, having learned his lesson.

Lucas appears as the boss of World 2. He attacks using his skateboard and other ones that are spread throughout the arena if the stunt doubles he sends are defeated. But again, Scott defeats him and he tries to run away by griding on a rail, only to fall at the bottom with full force, disintegrating into coins and a skateboard. But again, Scott can't collect the item, as it will dissapear seconds later.

Lucas is arrogant and tries everything to look tough. His acting skills make him incredibly convincing, and it also led to a lot of success, increasing his arrogance even more. In spite of this however he is arguably the most moral out of the evil exes, genuinely not going after Ramona and Scott out of malice and merely out of duty even if he did enjoy hurting him, this is especially noteworthy in the graphic novel although still present in the film such as when he casually asks Ramona how she's been while complimenting her on Scott (albeit after punching him)

Unlike the other members, Lucas doesn't have a big variety of powers aside from brute strength and fighting skill, which he uses in the movie to toss Scott at a tower with full force and kick him out of the air and through a banner moments later. 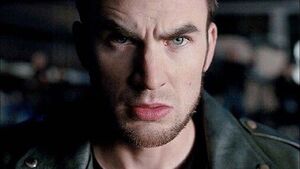 Lucas in the video game.