Start a Wiki
Lucia, also known as Bioroid LCR, is the female protagonist of Contra: Shattered Soldier. She is one of the main antagonists in Neo Contra.

She was Bill Rizer's partner during the events of Contra: Shattered Soldier, who was originally a cyborg designed by the late Dr. Geo Mandrake, but was unable to finish her due to his death.

For reasons unknown, however, she became one of the four elite warriors of Neo Contra.

She is eventually encountered in Stage 3 of the game and is defeated by Bill and Jaguar. She later appears as an unlockable character in Contra 4. 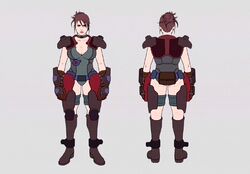 A concept art of Lucia.
Add a photo to this gallery

Retrieved from "https://villains.fandom.com/wiki/Lucia_(Contra)?oldid=3540571"
Community content is available under CC-BY-SA unless otherwise noted.