Destroy all life on Earth.

Attempting to wipe out humanity.

Lucia is an Impactor and agent of the Warp Monarch in Chouseishin Gransazer.

She was portrayed by Chisun.

Lucia originally arrived on Earth alongside Radia with the mission of hijacking Cloud Dragon and using it to cause the sun to go supernova and destroy Earth. After Radia's attack on the JSDF, Lucia ambushed Ai and Tappei. After Lucia beat down Tappei, Ai transformed into Sazer Pisces and fought Lucia, though she was unable to overpower the Impactor. However, Sazer RemIs soon shows up and beats back Lucia, injuring her and forcing her to revert to her human form. Realizing she's been defeated, Lucia summons several Gig Fighters to cover her while she escapes. She later meets up with Radia, but soon collapses due to her wounds, prompting Radia to vow he will complete the rest of their mission himself.

After Radia was killed by Leviathan, Lucia swears she will kill the Gransazers in revenge. Despite Logia ordering her not to fight them just yet, she attacks Samura and fights Tenma and Gou. She later gets scarred by Ai and attempts to get revenge on her, but is stopped Ran and Mika arrive and help Ai defeat Lucia. She is then taken to a hospital in order to heal her, but human medicine has no effect on her. However, Logia discovers her position and rescues her.

Despite being ordered not to continue the mission, she attempts to defeat the Gransazers by using Accelerator to increase her power and enlarge her. At first she over-powers the Chouseishin but is eventually defeated by DaiSazer. Despite DaiSazer's pilots making sure not to kill her, she dies as a side affect of the Accelerator's power, leaving behind her card for Logia to find. 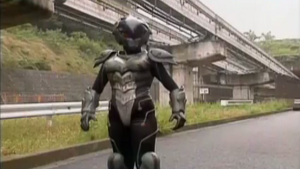 Retrieved from "https://villains.fandom.com/wiki/Lucia_(Gransazer)?oldid=3540572"
Community content is available under CC-BY-SA unless otherwise noted.