Hanging out with Angelene, Agnese, and Orsola.

Lucia (ルチア Ruchia) is a character from A Certain Magical Index. She is a nun from the Roman Orthodox Church ​and is a member of both the church and Agnese Forces. She is a close friend of Angelene and Agnese Sanctis and is also a very loyal and devoted follower of the Roman Orthodox Church. She first appears in the Orsola Aquinas Rescue Arc, where she serves as an antagonist but she is eventually betrayed but gets rescued and redeems herself later on.

Lucia is as tall as Touma is making her a teenager and is older than both Angelene and Agnese. She has short blonde hair and vicious blue eyes. Her hair is usually conceled by her black coif with the locks of her hair exposed. She wears the traditional nun uniform with a white colar and sleaves. Her nun unifrom is black with a dark grey cross on her chest with the lower half of the robes being removed much like Agnese and she also has black stockings.

Lucia is a loyal servant and devouted follower of the Roman Orthodox Church. She strongly believes in that the church says and blindly follows the dogma of both the church and Agnese herself. Lucia followed the orders of both the Roman Church and Agnese by tricking the Anglican Church and Touma into having them capture Orsola and then fought against them once they were freed and began to fight to rescue and free Orsola from Agnese. Following the failure to capture Orsola, she is captured and becomes very protective of Angelene and after becoming a memebr of Necessarius, she becomes more nice and peaceful and has a more positive view of Non-Catholics (or heretics as she called them). She is still a Roman Catholic and is devoute to the faith but serves both a Protestant and Catholic institutions. 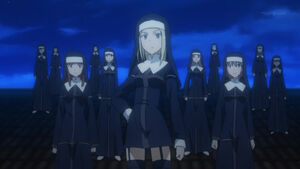 Lucia with her subordinates on top of the Orsola Church 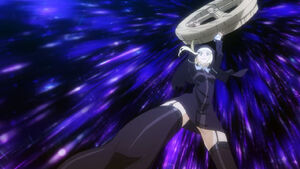 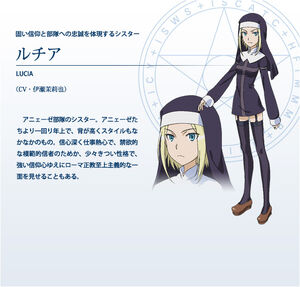 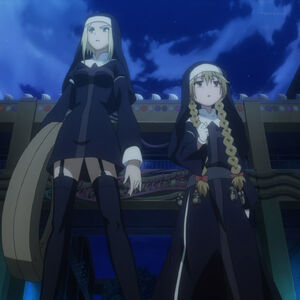 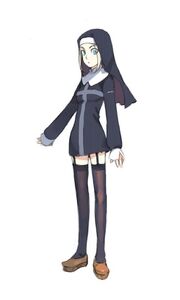