Scheming.
Representant himself as a god.
Killing People who oppose him.
Abusing Moia.

Destroy Zamroak (failed) and oust his spirit from the world (succeeded indirectly).
Manipulate the player into plundering the Staff of Armadyl for him (can fail or succeed, player determined; although he obtains it later on).
Eradicate the heroes of Falador (succeeded).
Overthrow Zamorak (failed).
Obtain the Stone of Jas (succeeded).
Survive the 17th Ritual of Rejuvination (succeeded indirectly).
Vanquish the Dragonkin (failed).
Devour the entire power within the Stone of Jas (succeeded temporarily) in order to become an all-powerful god (failed).
Defile and usurp the whole of Gielinor in order to create the new Freneskae (failed).

Power-Hungry God-Wannabe
Lucien was a member of the fictional race called the Mahjarrat from the MMORPG Runescape and was amongst the most powerful of his kin. He is the main antagonist of the Mahjarrat quest series

Lucien was brought to Gielinor during the Second Age by Ichlarin, a desert God of Death to protect his pantheon from Zaros, a rival God that wants the lands of the Desert Gods. However, Zaros saw true potential in the warlike Mahjarrat race that he offered them a place in his army. All of the Mahjarrat left Ichlarin to join the God as they were disgusted with the former's peaceful ways anyway.

With the Mahjarrat at his disposal, Zaros soon had an unrivalled Empire that streched across a huge chunk of land that included several modern-day kingdoms and nations including Morytania, Asgarnia and Misthalin. The Empire became the most dominant force on Gielinor while the Mahjarrat were his most powerful soldiers in his army. However the Zarosian dominance did not last...

Zamorak, one of Zaros' trusted general was secretly plotting to remove his God from power with Lucien one of the conspirators. He eventually gains the Staff of Armadyl, a weapon that can kill a God and leads his followers to launch a coup. The battle between Zamorak and Zaros ended with the latter's godly powers being transferred to the former and Zamorak banished his former master from Gielinor.

Shocked with what happened, other Gods, despite their rivalry with Zaros were angered with Zamorak for killing one of their own and sent the new God into exile. After his new master's exile, Lucien went into hiding and would eventually resurface when Zamorak returns with an army to start the dreaded God Wars.

During the God Wars, little was known of Lucien's role in Zamorak's army although it is presumed that he used his abililties like Necromancy to lead his forces. After Guthix, the God that shaped Gielenor woke from his long slumber and ended the God Wars, the Mahjarrat started working in the shadows.

Some millenia later, he attempted to conquer the city of Varrock for unknown reasons. Despite amassing a large army, he was defeated easily due to the city having access to runestones that can be used to cast powerful spells.

The player will first meet him disguised as a frail and weak abnormality in the Flying Horse Inn in East Ardougne and he will give him or her a quest to get the Staff of Armadyl for him. The player knew little of the villain at the time and obeys. The quest leaves the player with two choices after his identity was revealed by the Guardians of Armadyl: Steal the Staff of Armadyl and give it to Lucien or defend the staff and kill Lucien. If the player decides to kill him it was revealed that he cannot be killed by the player and he gets the staff anyway despite his/her efforts.

In the quest While Guthix Sleeps, he sheds his disguise as a weak man and reveals himself as a powerful necromancer. He shows his full strength by killing six heroes at once with the Staff of Armadyl. At the same quest he steals the Stone of Jas, an artifact of immense power pre-dating Guthix's arrival on Gielinor.

Lucien is seen once again and last time in the Ritual of the Mahjarrat. With both the Staff of Armadyl and the Stone of Jas, he became the strongest of all the Mahjarrat attending the Ritual of Rejuvination. The Mahjarrat attempted to kill the player by summoning monsters before and during the ritual. When he refused to help his cousin and ally Zemourgal in the fight, every Mahjarrat turned on him. When the ritual ended he was fully rejuvinated like all of the other Mahjarrat. Azzanadra, a Mahjarrat that was loyal to Zaros casted magical spells powered up by the betrayed God in an attempt to kill Lucien. When Lucien attempted to use the Stone of Jas against him, the Dragonkin , ancient creatures that also pre-date Guthix's arrival came to kill him for using the Stone of Jas. He met his end in the battle by getting impaled by a broken piece of the Staff of Armadyl destroyed in the fight. The threat of Lucien was over but it was overshadowed by a threat, greater than him.

thumb|Lucien in his weak form

thumb|Lucien in the WGS banner

thumb|Lucien in the ROTM banner 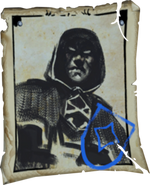 thumb|Lucien on the wanring banners in Falador City

thumb|Lucien gaining power from the Stone of Jas 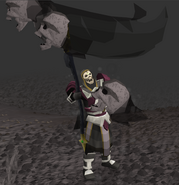 thumb|Lucien summoning warriors of the dead

thumb|Lucien's death
Add a photo to this gallery

Retrieved from "https://villains.fandom.com/wiki/Lucien?oldid=3550010"
Community content is available under CC-BY-SA unless otherwise noted.