Take control of Heaven and Purgatory so as to be supreme master of all afterlives (failed).

Lucifer is the fallen Angel that rules over Hell and the main antagonist of the 2010 video game Dante's Inferno and its animated adaptation, which were inspired by the first part of the story by the real life Dante Alighieri, which is called The Divine Comedy.

He is the ruler of Hell who makes a deal with Beatrice on Dante's remaining faithful during the Crusades, and wins the deal and takes her to his realm. During Dante's journey to rescue his beloved, Lucifer torments the warrior until he is confronted by him in the final circle of Hell, where it's revealed that the demon had Dante arrive there to free him from his prison. When Lucifer tries to escape from Hell to destroy the world, he is stopped by Alighieri, who uses the souls he has saved to imprison the devil once again.

He was voiced by John Vickery (who also played Scar in the 1997 theatre production of The Lion King, Mr. Welles in Babylon 5, and also voiced Auctioneer in Pirates of the Caribbean: Tales of the Code: Wedlocked) in the game, and Steve Blum (who also voiced Ares in God of War, Vilgax and Zs'Skayr in the Ben 10 series, Green Goblin in The Spectacular Spider-Man, Killer Croc in the Batman: Arkham series, Amon in The Legend of Korra, Starscream in Transformers: Prime, and Lady Arkham in Telltale's Batman) in the film.

Banishment to the Inferno

Lucifer was once God's most favored Angel, the "Morning Star, the brightest in the sky" as he called himself, and lived in Heaven, having no superior other than the Lord himself. But his great beauty and power sowed a belief that he was a perfect being and he became enraged when God's favorite creation became man. Lucifer gathered an army and attempted to take control of Heaven, but was defeated and lost God's favor. As punishment, he and his minions were cast into Hell, where Lucifer seized control, becoming ruler of the damned.

While Dante Alighieri was fighting in the Crusades, Lucifer made a bet with Dante's fiancé, Beatrice Portinari. If Dante kept his vow not to sleep with any woman while he was gone, Beatrice would see his safe return from the war. If not, her Soul would belong to Lucifer.

The lord of the damned won the bet and when Beatrice was killed, he took her Soul to Hell with him. Dante chased after them, determined to save Beatrice from the Inferno while Lucifer constantly taunted him and forced him to undergo flashbacks of his sins to try and break his Spirit. As Dante traveled through the Circle of Anger, he was forced to watch as Lucifer had Beatrice undergo the final ritual to become his bride.

After freeing Beatrice from Hell, Dante descended into the Circle of Treachery where he encountered Lucifer in a giant three-faced form trapped in a lake of ice formed from his own frozen tears named Cocytus. Dante succeeded in greatly injuring the Demon, but he only split his stomach open to let out his true form, a corrupted version of his old self with torn wings, large horns, and goat legs.

Lucifer revealed that Beatrice had never been the one he sought to use to free himself from Hell, she had simply been bait to draw in Dante. Others had tried to free him before, including Alexander the Great, Attila the Hun, and Lancelot, but they had not been impure enough to get through his outer body. However Dante had been perfect for the job since he had the strength to fight his way through Hell and a soul black enough to free Lucifer. The lord of the damned then began battling Dante on Cocytus, but the demon was overpowered by him. However Lucifer revealed that despite the crusader's defeat of Death, he was still dead and could not leave Hell because of his sins. But Dante called on the souls that he had absolved on his journey and asked that they do the same for him. Seeing the power of the souls, Lucifer realized the unimaginable power and tried to tempt Dante to join him to overthrow God and Heaven together. However, Dante refused and let the Souls poured forth and drove Lucifer back into his imprisoning body, then bound his arms in ice. They then gave Dante passage to Purgatory, but when he arrived there, he tore off the tapestry on his chest, which formed into a snake and Lucifer's laugh was heard, implying that he did manage to escape from the Inferno, and that he will corrupt the countless souls in the afterlife.

Lucifer is a highly cunning and intelligent individual who convinces his followers to do his bidding by making faustian bargains with them. He often makes his foes undergo harsh challenges and trials before they can face him. Lucifer is a proud and calculating Demon that takes great delight in punishing the damned, the impure find terrible punishment at the hands of Lucifer for their sins. Lucifer is arrogant and prideful, believing himself superior to mankind, and was insulted when Dante attacked him in the ninth circle due to his misanthropy. He is also cowardly, attempting to persuade Dante to work with him when Dante prepares to imprison him once again.

In the animated movie, he stated that he introduced sin into the world, but mankind on its own was responsible for spreading it like a plague.

As an immortal creation of God Himself, Lucifer is a god-like celestial being of immense supernatural power. After his fall from Paradise and becoming the ruler of Hell, he gained incredible demonic abilities. Lucifer is the most powerful being in all of Hell. His only rival is Archangel Michael and the only one more powerful than either is God. 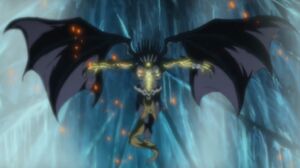 Lucifer in the animated epic. 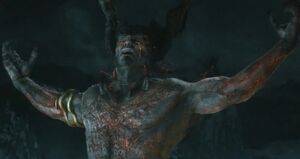 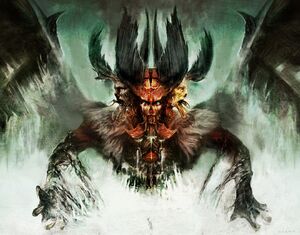 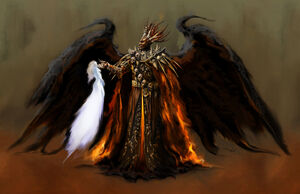 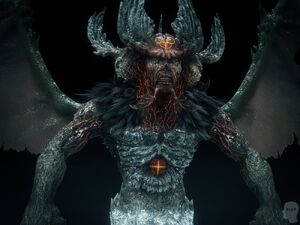 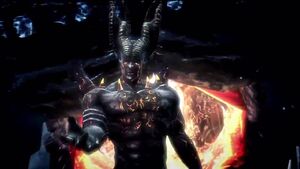 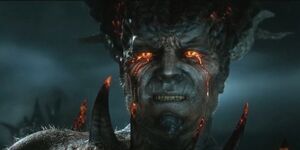 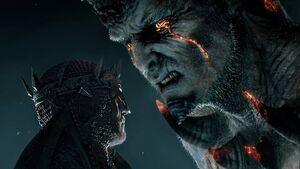 Lucifer tells Dante that he is sick of him. 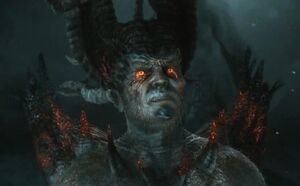 Lucifer attempts to persuade Dante that they can work together

Lucifer's defeat, imprisoned in the ice once again