CEO of Hell
Queen of Hell
The Maid Demon

CEO and Queen of Hell (formerly)

Take her throne back from Loremaster.

Lucifer is the primary antagonist of Helltaker. She is the female demon that the titular Helltaker encountered on the eighth stage to obtain his demon harem. Stylizing herself as The CEO of Hell, it was revealed that she is the leader of the populations of Hell in general (including the demons and skeleton minions that Helltaker fought in his quest) and has a penchant to make several souls that went to Hell, including Helltaker, as her slaves.

Lucifer herself can be described as a well-endowed and gracefully refined woman, befitting her nature as the de facto leader of Hell. She is a woman with white long hair, red eyes and unlike other demons, she has large white horns and is wearing a black spiked tiara on her head. In addition, she also wears a black businessmen suit with a red shirt and black tie tucked inside of it, and also wears the sigil of Lucifer on the left side of her chest. She is often seen holding a glass filled with wine in her left hand.

After escaping from Hell with the Helltaker and his harem of demons, Lucifer then changed her appearance in order to eat some pancakes made by the Helltaker himself by wearing a red shirt, a black apron with the text "SATAN" engraved on it and having her hair getting put up in a rather messy ponytailed bun.

In her attire as the Maid Demon on the Examtaker DLC, Lucifer's attire switches to that of a more modest black suit, with Lucifer now wearing a red scarf, a small coat, red gloves, and a skirt. Lucifer also wears a large red hairpin and red flowers in her hair.

Being the leader of hell, Lucifer appears as a seemingly calm and collected person with a smooth arrogance on her face. At the same time, she also has no hesitation to show her seductive power towards Helltaker in order to make him her most treasured slave. In addition, Lucifer also hates when someone behave inappropriately in front of her as Helltaker learns the hard way if he were to be condescending towards her.

Despite her calm and collected behavior, it is shown that Lucifer is sometimes incompetent and unlucky when it comes to managing hell and its demons, even becoming embarrassed after seeing other demons didn't listen to her orders due to the fact that the demons prefer to follow her out of free will rather than respecting her. In the comics, she is also shown to be a bit spoiled as she complained about Helltaker's laziness to the point that he didn't help her during their tabletop game session.

In spite of this, Lucifer does show several positive sides at the end as she is shown to be fond of sweet food such as pancakes or playing turn-based strategy games. In addition, she also grew fond towards Helltaker over the course of the game, even attempting to order Judgement to stop the punishment for Helltaker and after joining his harem, she also decides to help Helltaker in the kitchen by creating delicious pancakes for him and his harem while also warns Helltaker about Beelzebub attempting to lure him to the abyss as she attempts to close the portal to protect Helltaker. Her honorable side was also shown in the past as she is revealed to be the person who gave Justice her gloves during her days as a prosecutor as the two had mutual respect with each other.

Lucifer appeared in the eighth stage of the game where the Helltaker attempts to cut in line that her Skeleton minions formed in order to meet with her in person. When encountering him for the first time, Lucifer was seen swirling her wine glass with her two skeletal bodyguards guarding her from behind. She then congratulates the Helltaker on how he managed to pass all the trials and tribulations that she set for him in hell while making him an offer that mortals can't refuse; by forcing the Helltaker to pledge his soul to her so that she can make him her most treasured slave.

If the Helltaker agrees, Lucifer plants a kiss on his forehead which results in his life melting away. However, if he decides she can instead join his harem, she becomes suspicious and a bit irritated at the same time while asking about the Helltaker's true goals. If he tells her to ask permission before speaking to him, Lucifer then teaches him a lesson by a fatal hand gesture that turns his blood into vinegar. However, if he expresses offering "coffee, turn-based strategies, and chocolate pancakes," she ends up become intrigued due to her being a fan of pancakes and decides to join the Helltaker's harem at the end of the day.

When the Helltaker attempts to leave Hell with his harem and asks for some advice, Lucifer advises him to skip the stage through the pause menu because she doesn't want to wait all day long while commenting about the mess near the Hell's Gate because nobody had used it for a while. As the Helltaker was prevented by the Demon Prosecutor, Judgement, from leaving and was subjected to her sinning machine, Lucifer orders Judgement to stop the punishment because he belonged to her and when Judgement refuses, Lucifer becomes a bit irritated because nobody listens to her orders.

Towards the end of the game, as the Helltaker and his brand-new companions he made in Hell successfully return home, Lucifer complimented his cooking skills on making the pancakes because it is rather otherworldly according to her while eating it happily. In the secret ending, when the Helltaker opens a portal to the endless void where Beelzebub resides, Lucifer warns the Helltaker about how he should not trust the demonic fly after she was banished to the portal due to how dangerous she is and will try to close the portal after the dinner is done.

In the comics, it is shown that the Helltaker's world sometimes experiences a rather chaotic state such as alien invasions or zombie apocalypses to the point that Lucifer suspected that the god had given up protecting the world using its natural order as she feels rather disappointed being stuck at home, due to the fact that she wants to enslave potential souls that were caught in the crossfire of those two incidents. As Malina decided to alleviate the mood by buying several tabletop games which lead to the Helltaker, Lucifer and Azazel enjoying the game together, it ends with both of the former two bickering with each other.

In another part of the comics, as the Helltaker asks Lucifer about demons and goat-like features, she mentions a goat fetish girl Baphomet, followed by telling the Helltaker that she possesses a limited shapeshifting power herself as she attempts to turn herself into a goat while flaunting her appearance towards him, suspecting that men like the Helltaker love goats. As he didn't feel attracted towards her goat form by saying he's not a furry, Lucifer dismisses his anger and sees him as in denial which would be the first step to the road of enlightenment.

During the timeline where Helltaker was trapped in the Abyss alongside Beelzebub, Lucifer then offers Judgement to watch a marathon about cute talking animals in the cinema for six hours in which Judgement agrees and decided to accompany Lucifer to the cinema. As she saw Azazel wanting to go back home to treat her illness which is revealed to be her slow transformation into a Fallen Angel starting with the symptoms that has her hair becoming whitish-grey and growing horns in which the latter puts Azazel in more denial, Lucifer then tells Azazel that her growing a horn could help her blend in with the demons and help with her studies to gain more secrets regarding the demons. This resulted in Azazel becoming elated with what Lucifer had said regarding her transformation while Lucifer was seemingly elated with her manipulation that ended up worked with Azazel. 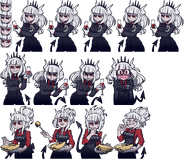