Kill the Ghost Rider
Complete his full form and make hell on Earth (all failed).

Lucifer, also known as the Prince of Darkness, is one of the main villains of the Marvel Comics series Ghost Rider.

He was created by Allyn Brodsky, Don Heck, Roy Thomas, Gary Friedrich, Mike Ploog, Daniel Way, and Javier Saltares, and first appeared in Tower of Shadows #4 in March of 1970.

He is based on the Lucifer of mythology and just like his counterpart is a fallen angel and one of the rulers of Hell. He is a major recurring villain in the Ghost Rider series and He was a former servant of God until he went rogue making him the True Devil in the series so far. He fought Ghost Rider a couple of Times and he was revealed to be less integeleanct than the other Helllords like Mephisto. Still he manage to trick Ghost Rider at one point where he would be free until Ghost Rider drags him back to hell with him.

He also tortured Zakiedl, a fallen angel for betraying him. For many years Lucifer with the help of other Hellords tried to collect Johnny Blaze's soul for many years back in the 1700's and had been defeated a couple of times. In the Chaos War he was apart of the event and was killed by the promidal darkness caused by Amatsu-Mikaboshi.

Lucifer was originally an Angel of Heaven, who was created by God (or the One Above All), and according to one story, he was responsible for leading an army of angels to banish N'Gari from Earth. Some point afterward, Lucifer accused God of loving humanity more than angels, and led a rebellion against him with some angels and his lieutenants. His revolt failed, and as punishment for his attempted takeover, Lucifer and his lieutenants were cast down into Hell. Lucifer and his lieutenants became demons, but the former rose to claim domination over the realm and became known as "The Devil".

Lucifer appeared before Johnny Blaze when he summoned the devil to save his adoptive father, Crash Simpson, from cancer. Lucifer removed the cancer from Simpson, but Crash died soon afterward in a motorcycle accident and his soul was sent to Hell. Lucifer returned to Blaze to bring his soul with him to Hell, but behind the scenes, the rebellious Archangel, Zadkiel decided to use that situation as an opportunity. Zadkiel was summoned by Johnny's adoptive sister, Roxanne Simpson, and bonded the Spirit of Vengeance named Zarathos to Johnny, making him the Ghost Rider.

After Johnny was killed, Lucifer tortured his soul and would trick the Ghost Rider into thinking he could escape. Knowing that the Ghost Rider would be able to escape to Hell since he had the power, Lucifer tricked Blaze into taking him to Earth. However, when Lucifer arrived to Earth's plane, his body exploded into six hundred and sixty six fragments which possessed corpses. When one of the possessed bodies died, the fragment of its strength would increase the power of the other fragments. Lucifer planned to have the Ghost Rider kill all of the bodies to increase his power, and have a complete form on Earth.

Lucifer and the Ghost Rider fought until Blaze tricked the devil, as Johnny and his current girlfriend, Dixie, had one of the hosts brain dead. Dixie was in charge of killing the host however the owner of the motel became suspicious of her and called the cops. They were filled with horror when they saw Lucifer's host in Dixie's room. Lucifer was defeated, and the final host was killed by the police officers who also killed Dixie as well, sending the demon back to hell. Dixie's death was manslaughter when she was killed by a bullet as Lucifer was being shot.

Lucifer is one of the strongest demons in the Marvel universe, and is well known master manipulator, trickster and deceiver. 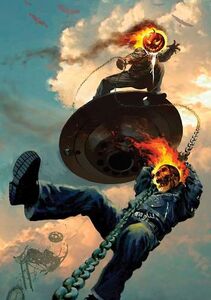 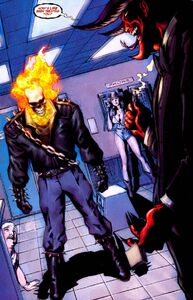 Dixie sees Johnny Blaze as the Ghost Rider and watches him fight Lucifer.