Encouraging humans to achieve their dreams.
Making deals with humans.
Transforming humans into demons.
Leading his army of demons.
Fighting his enemies.
Testing the power of his allies.
Waging war against the forces of Heaven.
Making speeches about chaos, social darwinism, freedom and humanity.
Monologuing.
Practicing magic.
Spending time in the church.
Spending time in bars/drinking.

Overthrow YHVH.
Turn the world into an anarchic and socially darwinistic "utopia" where humans and demons coexist.
Restore a great part of nature (both ongoing).
Transform Naoki Kashima into a true demon (Shin Megami Tensei 3: Nocturne, succeeded).
Use his arena to find the most powerful ally to fight YHVH and his allies (Shin Megami Tensei 20XX, failed on the Law and Neutral endings, succeeded on the Chaos ending).
Bring peace to the angel, human and demon worlds (Devil Children).

Lucifer is a recurring important figure in the Shin Megami Tensei series. He is often seen as a noble, charismatic demon, and represents the Chaos alignment, which is associated with anarchy, war, and even freedom.

After the death of Seth, Lucifer launches a demonic invasion at earth, he goes to Yomi, the location in where the Goddess Izanami, who had bestowed divine protection upon Yumiko Shirasagi and Akami Nakajima, was present at that moment.

He considers Nakajima to be the root of all evil, denouncing him as a devil in disguise, and attempts to heroically reveal himself as the true god of the world, who would eliminate all the misery, suffering and misfortunes that have occurred, since that was his plan from the beginning.

(His debut on the videogame media, and also his debut as a boss.)

He is the final boss of the game, and at first, he appears on the Infini Palace, using the blessing spell called "Diarahan" on himself repeatedly, unless the protagonist, Nakajima, has the item known as the "White Dragon Jewel", which disables Lucifer's capability of using said ability,

Upon defeat, he is shocked to know that Nakajima has achieved the aforementioned item, and while the demon temple is collapsing and the demons are running away, Lucifer tells Nakajima that the demons will return.

Lucifer appears early in the game, and is seen frozen in the depths of Ginza, with the protagonist being surprised on seeing him like that. After the protagonist defeat a lesser demon from the Mesopotamian mythology known as Pazuzu, Lucifer is released from his prison by the Dark Hero, who after a fight with the fallen angel, he can't defeat him and ends up returning to his temple on the Expanse.

The protagonist is then teleported to the temple by Izanagi, after he had rescued Izanami and had achieved the Palace Ring for himself. If the protagonist has Ba'al on his team, then Lucifer will join the protagonist to fight against the gods who according to him, are controlling humanity like they were puppets. He will also give the protagonist his sword.

After YHVH's defeat, Lucifer orders demons to go back to the expanse and seals the rift between both worlds.

Lucifer is the Chaos alignment, which associates with freedom and war. The protagonist can choose the Chaos alignment for freedom of choice, thoughts and actions. However, this freedom would lead to a vast amount of suffering and anarchy, leading the world into a primal state of unsuppressed vice and survival of the fittest.

Lucifer later takes the name of Louis Cyphre. The protagonist finds him after the Great Destruction, where Louis Cyphre observes the protagonist's actions. He hints at a much greater knowledge of what is happening, and seems to make allies of many demons quite easily.

At the end of the Chaos alignment path Lucifer appears in his true form to offer his congratulations to the protagonist for defeating the God of Law and resurrecting the old gods, but warns that the "true enemy" still exists.

In Shin Megami Tensei II, Lucifer is a well-respected figure amongst Demons. He is detested by YHVH and angels and he hates them in return. Lucifer represents the Chaos Path, where emotions are over cold logic, in 'purpose justifies the means'.

Throughout the game, Lucifer is aware that Aleph, the protagonist, is part of the Messiah project, and thus, many demons under his commands would assault him. As the game progresses, Lucifer becomes intrigued by Aleph's ability to defy God, and wonders if he is the incarnation of Satan, the one who would Judge them all. Lucifer is later disappointed to learn that Aleph was not Satan, though Lucifer himself could sense the imminent signs of Satan's coming.

Since Satan was sent by YHVH to cleanse the demon world, Lucifer, as the lord of the demonic world could not bear to see it's destruction. He offers Aleph an alliance to face Satan and finish their battle once and for all. Should Aleph chooses the Chaos Alignment path, Lucifer will join him in order to help protect the denizens of the world from Satan's judgment upon the world.

In this installment, Lucifer is the responsible for the amount of demons that had gone to earth, and while using his human form, Louis Cyphre, he created an arena challenge to see who would be strong enough to help him in his goals of defeating YHVH and his allies.

In the Law and Neutral routes, he will be the final boss of the game, and in the chaos route, the final boss will be Metatron, who after being defeated by the protagonist, Lucifer allows said protagonist to rule the world.

This is the first game on the series, in where Lucifer is fought on his angelic form, instead of his demonic form, like the previous games.

Lucifer plays an important role in Shin Megami Tensei III: Nocturne, where he takes the form of a young boy and an old man. They are accompanied by an old nurse, and a young woman dressed in black mourner's garb respectively. Assuming the form of a child, Lucifer is first seen in Shinjuku Hospital, where he is intrigued by the protagonist, Naoki Kashima, but disappears when the protagonist approaches him.

After the Conception, to allow Naoki survive in a now demon-ridden world, he places a Magatama into Naoki, allowing the insect to merge with him to transform him into the legendary Demi-Fiend. As the story progressed, Lucifer would assume the form of either an old man or a child, giving hints about the nature of Conception, and God himself. Lucifer would play different roles depending on Naoki's actions and the path he chooses. In the Neutral path, Lucifer is reminded of himself by protagonist's decisions, as Lucifer himself walked his own path and chose his own decisions before and after his fall from grace. He warns the protagonist to keep his demonic powers, as one day, the "true enemy" would hunt him down for defying his will, just as what happened to Lucifer himself.

In the updated release of Shin Megami Tensei III: Nocturne, titled Shin Megami Tensei III: Nocturne: Maniax, Lucifer takes a more important role, it is revealed that he resides deep inside the Labyrinth of Amala. He first summons the Demi-Fiend there to grant him the Candelabrum of Sovereignty, and instructs him to hunt down and retrieve the all the other Candelabra from other fiends that were also given them. His plans are finally revealed should Naoki venture into the final Kalpa of the Labyrinth of Amala, Lucifer is planning to create an extremely powerful demon, strong enough to lead the legions of Chaos in a final battle against YHVH. By granting many powerful demons a Candelabrum, Lucifer had planned to see who would reign supreme amongst demons and fiends.

An extra ending, accessible only by completing the Labyrinth of Amala unlocks the 6th ending, the True Demon path. After Naoki kills Kagatsushi, the two entities, the young boy and the old man, appear and tell the Demi-Fiend that he succeeded in breaking the cycle of destruction and rebirth, and thus, time itself is dead. The universe has been reverted to it's initial state of primordial chaos, along with all other worlds being finally freed from the grasp of YHVH. This however would mean that Naoki would be forever cursed by the Great Will, but Lucifer comforts by telling him that that demon race along with himself would always bless him. The blond child and the old man then tells Naoki that he needs to test his powers, and the two entities fuse and assume Lucifer's demonic form, engaging Naoki in battle.

Lucifer appears here as a strange girl the Protagonist meets early in the game, calling herself Louisa Ferre. Throughout the game she appears and gives cryptic clues to the Protagonist, and seems to be aware of Jimenez's fate to become a demon and serve the Chaos faction. Should the Protagonist follow the Chaos path, she appears after the Herald Mastema is defeated in Sector Horologium, where she mocks him for his state as a fallen angel. She also proclaims that though she has no love for humanity, she will never abandon them.

Lucifer is the main antagonist on the law route and the representative of the Chaos faction. Much like his earlier incarnations, he values war and freedom. He is more vocal about his hatred towards YHVH, calling the heroes before fighting them "Puppets of God".

While Lucifer's personality has varied through the different games, he is always portrayed as an extremely sophisticated, well-educated, and unmeasurably intelligent being who likes to wear expensive looking suits on many of his forms, and sometimes talks using a classical, Shakespearean style english. Lucifer has stated that although he has no love for humanity, he will never abandon them, and he values the freedom of individuals, although to a certain extent, since he has manipulated many humans into becoming demons. He is known for his support of Social Darwinism, believing that whoever is the fittest, has to be the one who makes the rules, he is not hypocritical in his reasoning, however, as he will accept that if an enemy defeats him, they were the one to be in the right. He also has a bit of the Übermensch idea on him, since in Shin Megami Tensei II, he talks about acting on his own values, and one of his goals is to eliminate the conventional conception of morality that humanity has.

He is known for being an extremely proficient master manipulator, having manipulated 1/3 of the angels of Heaven into following him, and regularly recruits humans or former humans that can choose to follow him. However, while not completely proven, it is very likely that Lucifer's affability is not faked, as he rarely insults his enemies, even after being defeated, not to mention that if Aleph denies Lucifer's offer of an alliance at the end of Shin Megami Tensei II, the latter will state that he doesn't want the former to be his enemy, and calmly lets him walk away. 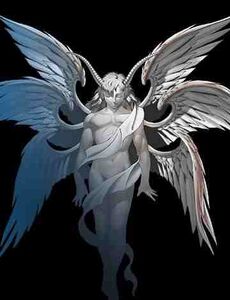 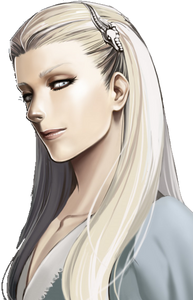 Lucifer on the Megami Tensei Wiki

Lucifer on the VS Battles Wiki