Acting bossy to her sisters.

To please her master Beatrice.

Lucifer is the eldest sister of The Seven Stakes of Purgatory and an antagonist from Umineko no Naku Koro ni. She represents the fallen angel Lucifer and the corresponding sin of Pride.

She was voiced by Yuka Saitou.

As the eldest of the seven sisters, Lucifer is their leader. Because of this, she claims to be the strongest of the sisters but is actually aware that she is also the least talented. As a result, she often acts arrogantly to hide this fact from everyone else because her biggest fear is that her sisters would sneer at her if they found out. She is very haughty and arrogant, but nevertheless actually feels pleasure from submission.

Lucifer has long, raven-black hair and the same red eyes as her sisters'. Her outfit is also the same as that of her sisters. She has the one-winged eagle symbol on her "skirt." 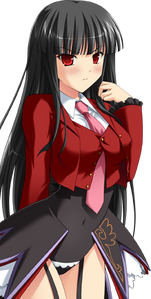 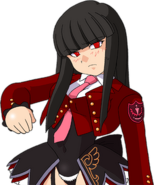 Umineko PC
Add a photo to this gallery

Retrieved from "https://villains.fandom.com/wiki/Lucifer_(Umineko)?oldid=4247546"
Community content is available under CC-BY-SA unless otherwise noted.