Villains Wiki
Register
Don't have an account?
Sign In
Advertisement
in: Female, Traitor, The Simpsons Villains,
and 28 more

Be hired as a babysitter and then rob the house while trusting parents are out.

Lucille Botzcowski, also known as Ms. Botz or The Babysitter Bandit, is the opening antagonist of the animated sitcom series The Simpsons and the main antagonist for The Simpsons Season 1 finale episode "Some Enchanting Evening". She works as a babysitter, only to get into houses of trusting people and rob them.

She was voiced by the late Penny Marshall.

Hired by Homer from the Rubber Baby Buggy Bumper Babysitting Service, she was to babysit the kids while he and Marge stayed at a motel. After her arrival, the children discovered her true identity as a robber on a television show, but were captured and tied up before able to stop her. She then started looting The Simpsons' house, but was eventually thwarted and captured by Bart, Lisa and Maggie. The kids had to call for help from a pay phone, since Lucille had disabled the house phones. Homer and Marge eventually returned home, only to find The Babysitter Bandit hog-tied with her mouth taped shut, staring uncontrollably at The Happy Little Elves videotape. She deceived Homer into freeing her moments before the police arrived. Later, Homer and Marge realized that they made a mistake when the police told them what really happen.

In Bart's Dog Gets an F, a new broadcast mentions that she has escaped from prison. She appears in Hurricane Neddy, pacing back and forth in a cell in Calmwood Mental Hospital due to the Simpsons kids encounter. 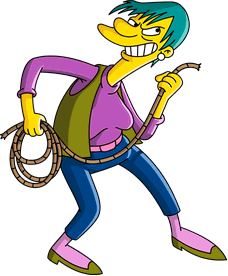 Lucille Botzcowski aka the Babysitter Bandit. 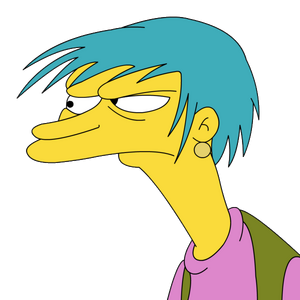 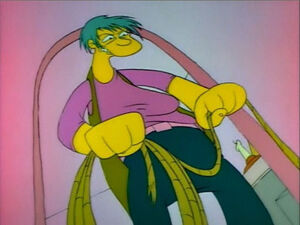 Ms Botz preparing to tie up Bart and Lisa. 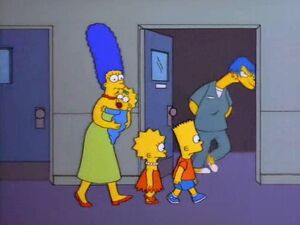 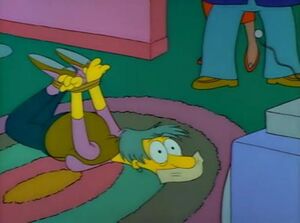 Gets a taste of her own medicine.